The concept of full state feedback is used in feedback control system theory to make it possible to place all closed-loop poles of a system. The poles correspond to the system’s dynamic behavior, so placing them at a desired location can be of great interest. The State-Space Controller add-in enables you to add a full state-space feedback controller to a system model in the COMSOL Multiphysics® software. In this blog post, we briefly review full state feedback, describe how to use the add-in, and demonstrate it with an example.

If \boldsymbol{D} = 0, we can place the poles of the system arbitrarily by solving the characteristic equation, as long as the system is controllable.

Implementing a State-Space Feedback Controller with an Add-In

Add-ins enable you to implement some functionality to your models. The State-Space Controller add-in, available as of COMSOL Multiphysics version 5.6, lets you place the poles of a closed-loop system.

For another example of a controller add-in, see the blog post: How to Simulate Control Systems Using the PID Controller Add-In. 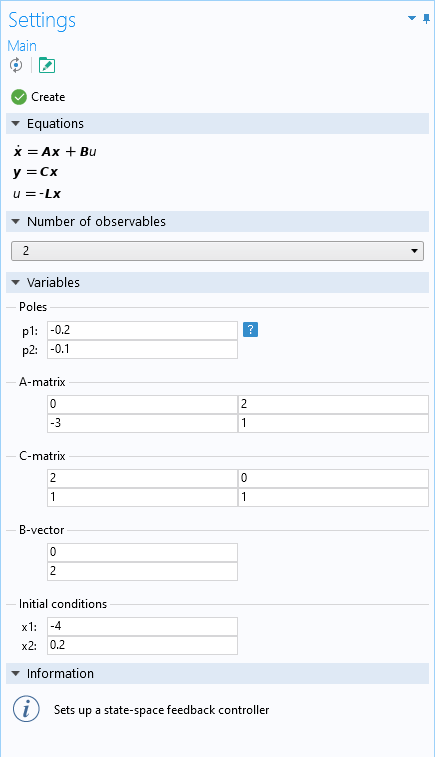 The Settings window for the State-Space Controller add-in.

You define the number of observables to the desired system, as well as the matrices \boldsymbol{A} and \boldsymbol{C}, the vector \boldsymbol{B}, initial conditions, and where to place the poles in a complex plane. The add-in then creates a new 0D model component, which defines the feedback controller using global equations. The Information section mentions the relevant component as well as how to access the output variables once the controller has been created. The control variable is available as u.

Below follows an example of how to use the add-in.

The system is described by the following equations, which are instances of Newton’s second law of motion and where a dot notation is used to indicate time derivatives:

In this case, the control variable, u, is the force, F, and \boldsymbol{C} is the identity matrix. We will define constants as parameters, as follows.

We can now use the State-Space Controller add-in to place the poles of the closed-loop system. Assume that we want four real poles, all at -0.5. Since we have four observables, we set up the add-in as shown below. 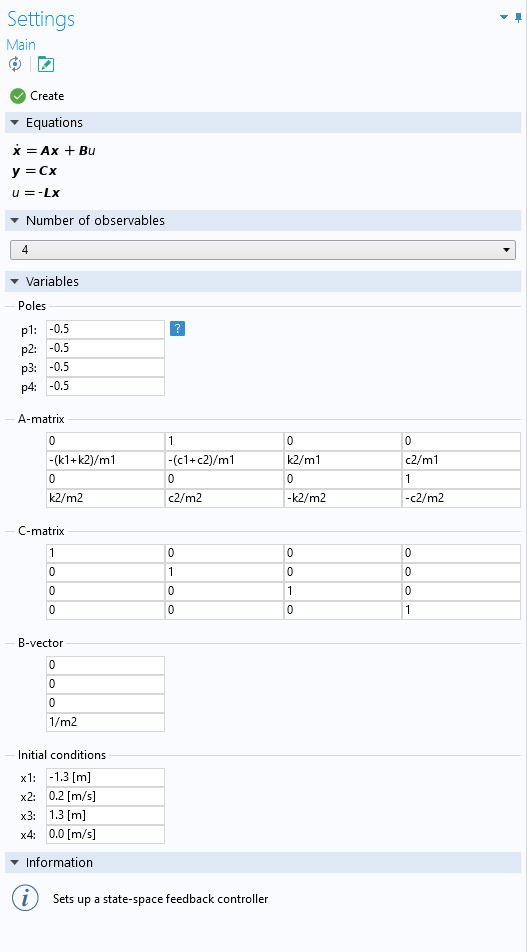 By clicking Create, we receive the following message.

Description of output variables from the state-space controller. 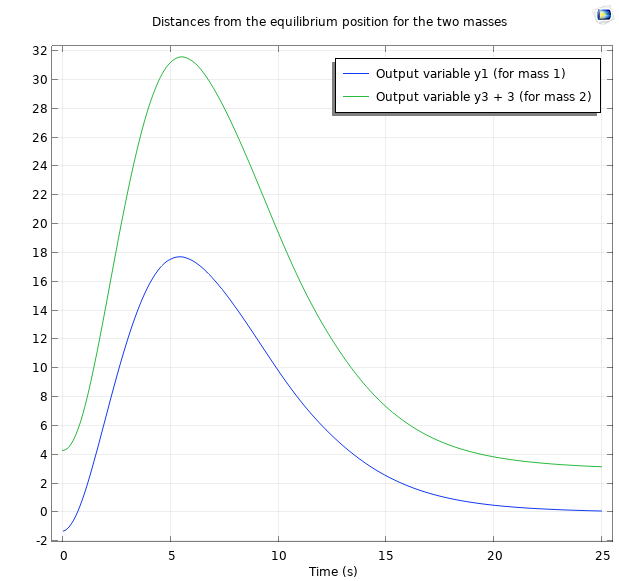 The position of the two masses for the first 25 seconds, when all poles are placed at -0.5.

We can also plot the force, which is accessible as the control variable, u. We attain the following plot. 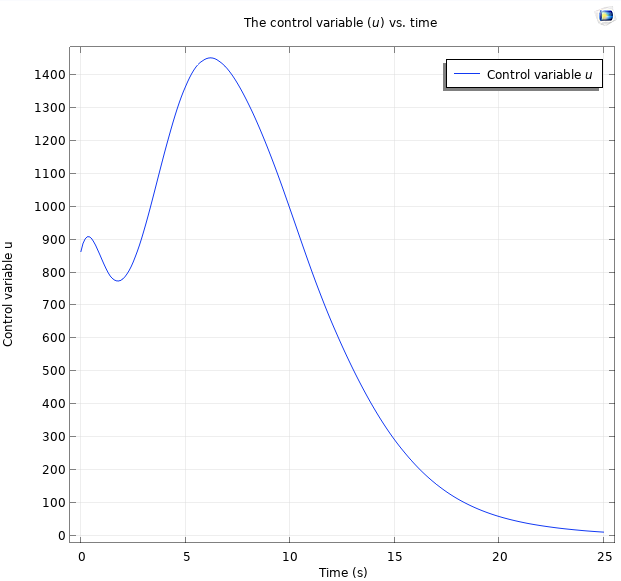 The control variable plotted for the first 25 seconds of the simulation, when all poles are placed at -0.5.

Let’s say that we are not satisfied with the settling time of the above systems. From control theory, we expect the settling time to be reduced if we place the poles further into the negative real plane. If we follow the procedure above, placing all poles at -1 instead of -0.5, we attain the following plot for the positions. 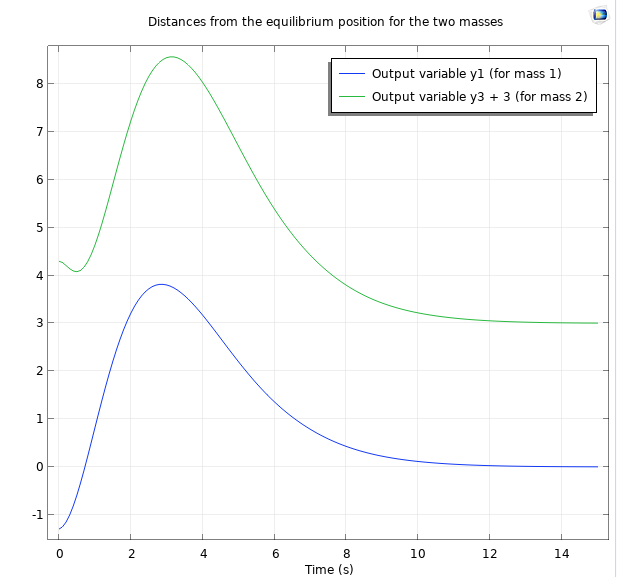 Position plot for the first 15 seconds, when all poles are placed at -1.

Furthermore, we attain the following plot for the controlled force. 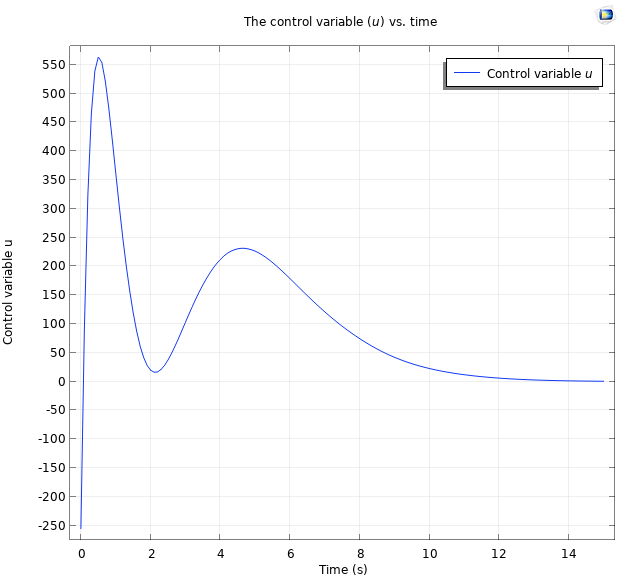 Force plot for the first 15 seconds, when all poles are placed at -1.

As expected, the system settles faster.

In the State-Space Controller add-in, there is also the possibility to place poles in the complex plane. Complex poles always come as pairs of complex conjugates. 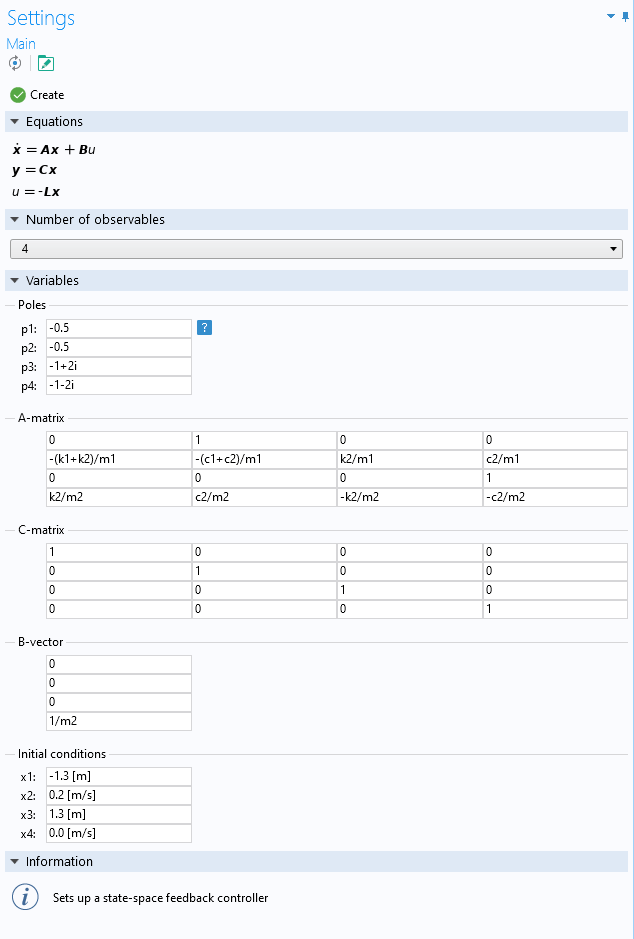 This results in the following position and control signal plots. 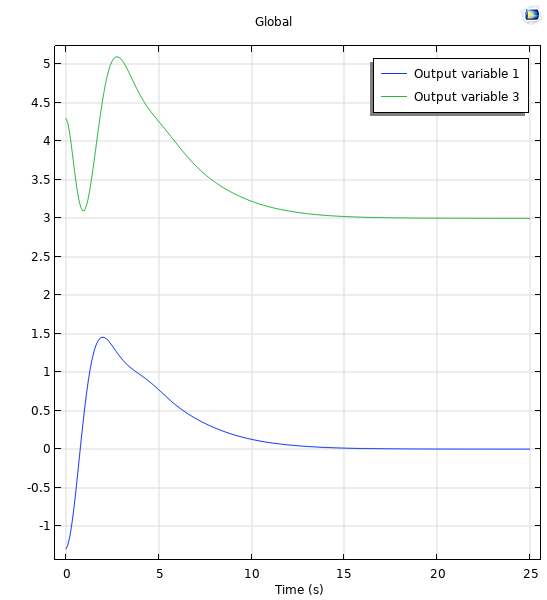 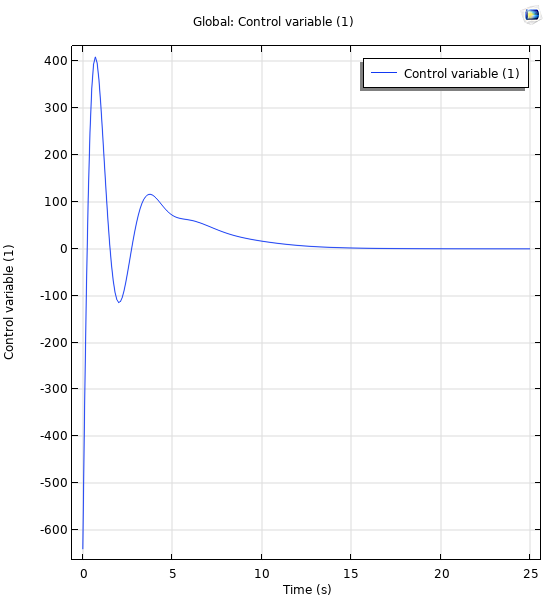 As seen in the simulations in the previous section, the behavior of the system can change drastically, depending on where the poles of the closed-loop system are placed. It is difficult to find a general description of how the placement of poles affects an arbitrary system. However, it can be said that placing the poles of a continuous system, as the one above, should lead to faster stabilization, but may lead to a larger control signal. Using the State-Space Controller add-in, you can easily evaluate the system behavior for various pole placements.

But, what if you could show us the steps how to extract the “reduced state space matrices” directly from a full COMSOL FEM model?

As if we take a simple supported “beam”, actuated by some Force transducer at half length, with the beam tip position measured by some “sensor” probe and we want to control that “mechanism” with a state space controller, we should now be able to extract the reduced state matrices directly from the FEM model, with the model reduction tool, no ?
Then we do not need to rewrite fully all the equations above and enter them manually.

Our previous NASTRAN FEM expert did this some 30 years ago, with brio, but he retired a decade ago … 🙂
We should be able to do it today, with COMSOL too, but I have not found any “procedure” to ensure I do it right, perhaps you may help here Magnus ?
As this is really a very powerful way to get directly from our model the best start of a state space closed loop controller.
Sincerely,
Ivar

Hi Ivar, and thanks!

Yes, what you suggest seems like a natural extension of this example. We’ll look into it.

Thanks for the blog…