Magnetic flowmeters are a noninvasive option for measuring blood flow. However, when patients move, displaced blood vessels can affect the sensitivity of the flowmeter. Researchers from ABB Corporate Research used multiphysics modeling to study how the displacement of blood vessels in a moving patient impacts the performance of a magnetic flowmeter.

To measure blood flow in a painless and noninvasive way for patients, medical professionals can use magnetic flowmeters, which rely on electromotive force (EMF). In a flowmeter, external coils generate a magnetic field and noncontact electrodes measure the induced EMF. When a patient moves during the measurement process (even by merely taking a breath), blood vessels can move, which affects the flowmeter’s sensitivity. This phenomenon is an important point of analysis in cardiac and thoracic medicine. 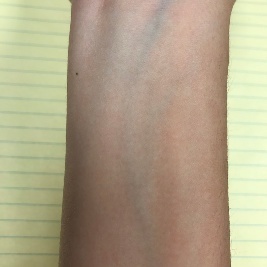 Magnetic flowmeters, which rely on coils and electrodes, are a noninvasive way to measure flow in a patient’s blood vessels.

Researchers from ABB Corporate Research in India built a multiphysics model of this process that includes the effects of fluid-structure interaction (FSI) and electromagnetics. Their aim was to understand how blood vessel movement influences flowmeter sensitivity by comparing the meter’s performance when blood vessels are displaced versus in their normal positions.

The research team modeled a blood vessel as a pipe, but with the appropriate biological material properties. They coupled multiple physical effects via built-in physics interfaces in the COMSOL Multiphysics® software. The Laminar Flow interface was used to model the blood flow through the vessel. To account for the magnetic field generated by the coils, as well as the EMF induced by the blood flow and magnetic field, they used the Magnetic and Electric Fields interface. 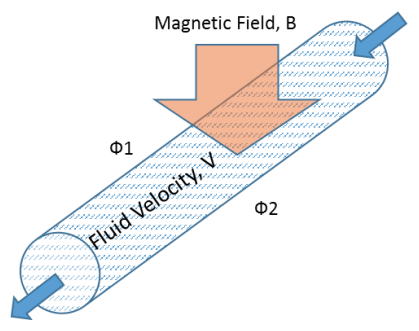 A schematic of the magnetic flowmeter model. Image by S. Dasgupta, K. Ravikumar, P. Nenninger, and F. Gotthardt and taken from their COMSOL Conference 2016 Bangalore paper.

The researchers also used the Structural Mechanics Module, an add-on product to COMSOL Multiphysics, to model the vessel displacement during patient movement. They coupled this analysis with the CFD Module to account for FSI, including how the vessel displacement affects blood flow and how the fluid pressure affects the blood vessel.

This model was used to analyze the sensitivity of the magnetic flowmeter when blood vessels are displaced and when they are in a normal position.

The researchers compared the results for a blood vessel in a normal position and displaced by 5 cm toward the upper coil. The simulation results show contour plots of the velocity and magnetic flux density across the pipe (i.e., blood vessel) cross section. Other results show the induced electric potential from the flow and magnetic field interface and the potential distribution across the pipe diameter. 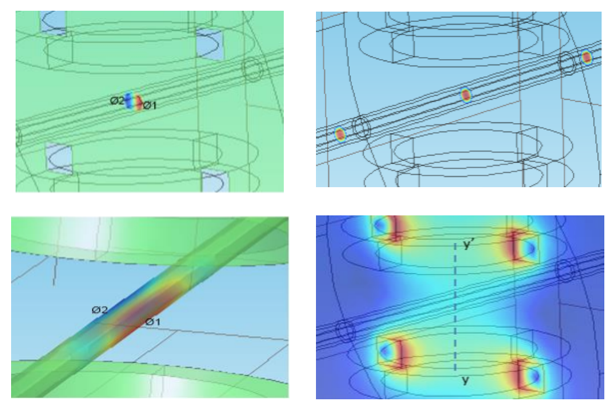 The plots indicate an increase in the sensitivity of the flowmeter between the nondisplaced and displaced blood vessels. The team determined that the increase is not due to velocity, since the velocity profiles are the same for both scenarios. Instead, the reason for the increase is that the displaced vessel shifted to a higher magnetic field zone, and the magnetic flux density in the vessel increased as it moved toward the coil.

Next Steps for Flowmeter Research

The researchers from ABB concluded through their simulation results that blood vessel displacement is a potential issue for medical uses of magnetic flowmeters. To address the concerns, they theorized that a patient’s body movement can be restricted during these procedures or a breath-synchronous magnetic field can be generated to compensate for the sensitivity changes.

While these simulations proved useful for the medical field, further studies can account for more real-world conditions, such as pulsatile blood flow as well as variations in vessel properties and body locations.

For the team, this research confirmed that COMSOL Multiphysics can be used to analyze how different phenomena — including fluid flow, structural mechanics, and electromagnetics — interact in a complex application.