In our recent blog post “Extracting Electrical Circuits from Electromagnetic Simulations”, we explain how you can extract equivalent RLC networks from any electromagnetic model, which is also applicable to any transformer with concentrated windings. In this blog post, we will show an example of a high-frequency ferrite core transformer with primary and secondary coils consisting of multiple sections, as well as provide an overview of circuit parameters and analyses.

There are various factors that play an important role in determining the performance of transformers. The equivalent impedance of a power transformer affects the short circuit or fault levels. Magnetizing inductances determine the inrush currents in large transformers, whereas leakage inductances play a decisive role in choosing the switching frequencies of power electronic circuits. Parasitic capacitances become significant in the working of high-frequency transformers. The behavior of transformers is largely characterized by their equivalent lumped electrical circuit parameters. Therefore, using simulation to extract the equivalent circuit parameters of a transformer is invaluable to the design process. 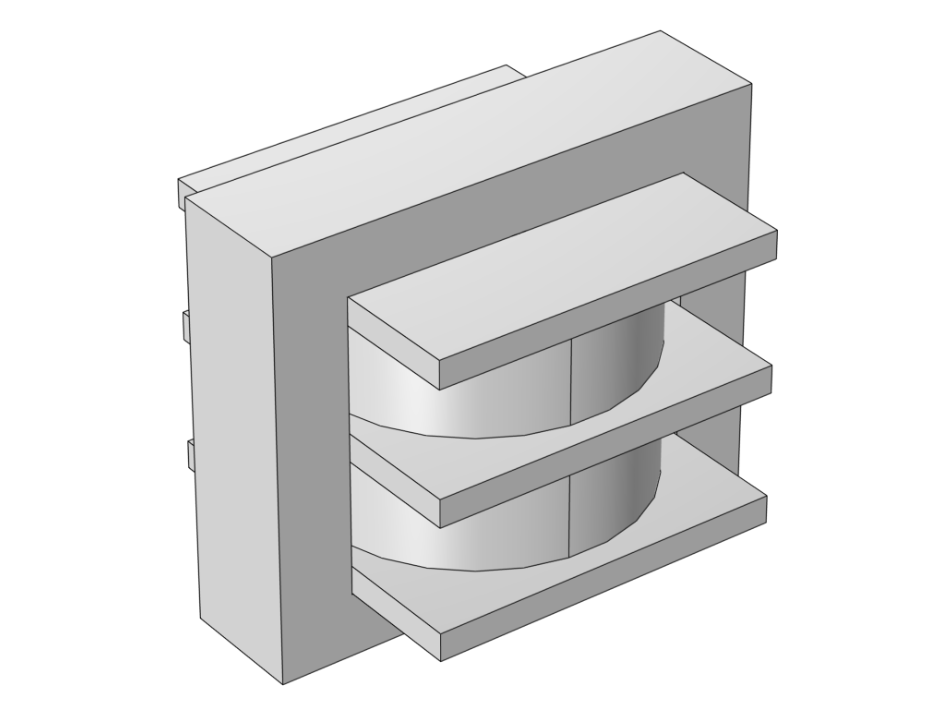 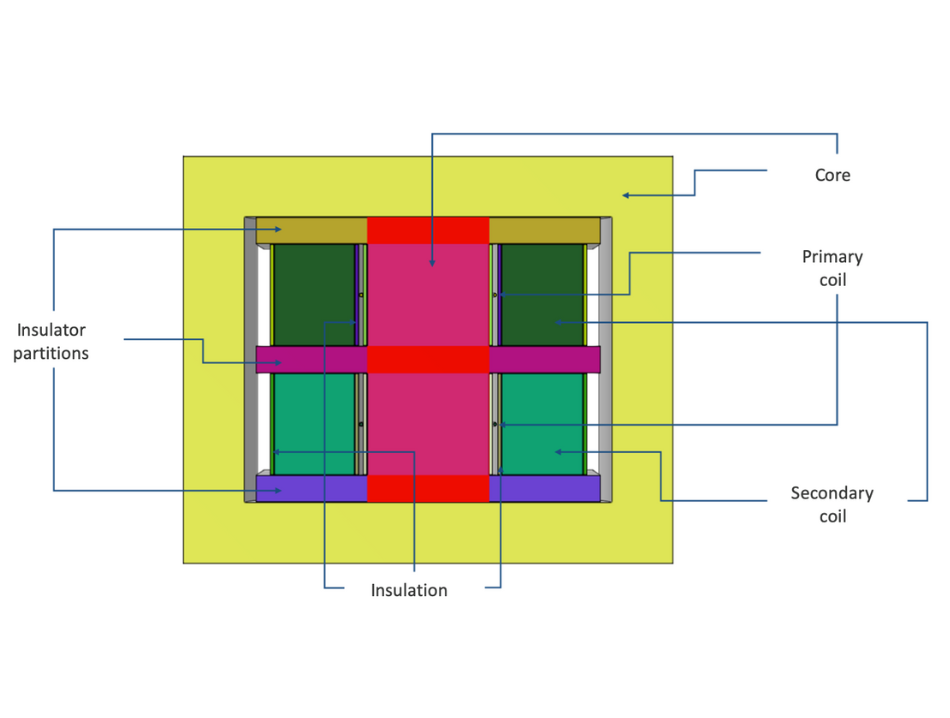 Left: A transformer geometry model. Right: A sectional view of the transformer (using the Clipping feature).

In the following sections we will show an example of a high-frequency ferrite core transformer to illustrate how to compute the equivalent inductance and stray capacitance values. It has a primary coil with 2 turns and secondary coil with 600 turns. The secondary consists of 2 sections with an insulator partition in between. The primary voltage is 10 V with a frequency of the order of tens of kHz.

Computation of Magnetizing and Leakage Inductances 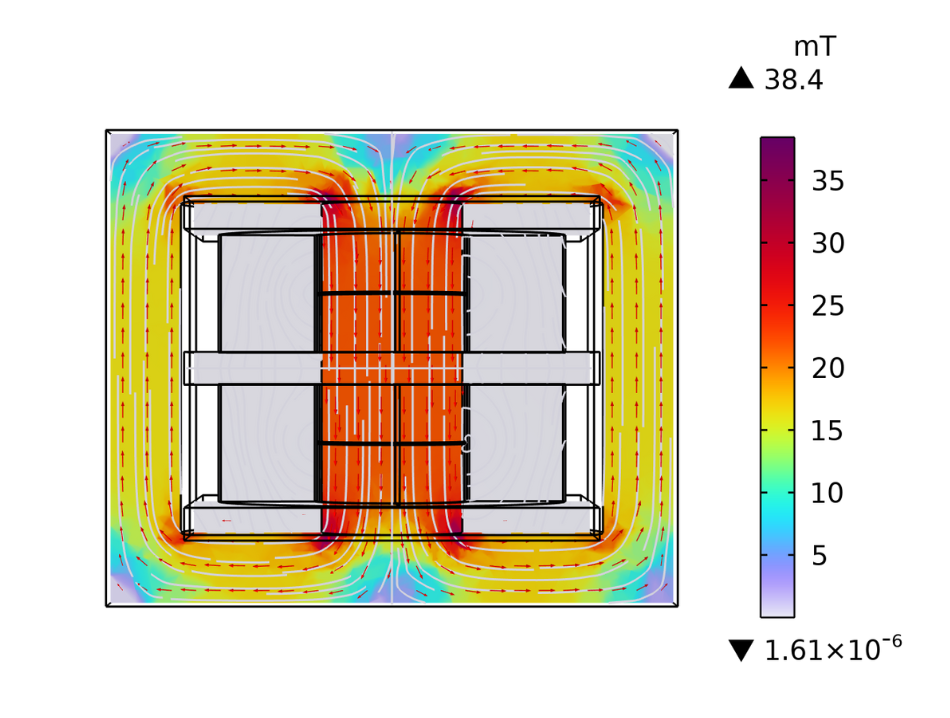 The magnetic flux density concentrated in the core of the transformer for an open-circuit test. 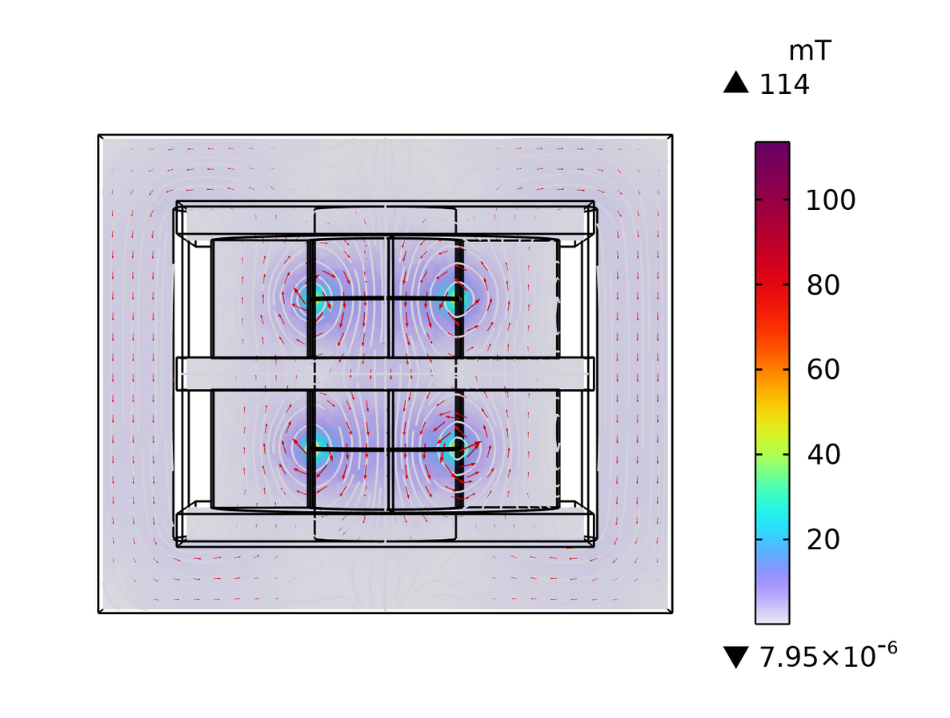 The magnetic flux density concentrated between the primary and secondary coil for a short-circuit test.

The leakage inductance value of 0.25 \mu H is obtained from the imaginary part of the primary coil impedance at 50 kHz. The coil resistance is 19.2 m\Omega.

The transformer is supposed to be a purely inductive device. But, as the primary and secondary coils are made of conducting materials with an insulating layer between them, it can be likened to a case of two conductors separated by a dielectric medium. This gives rise to capacitive effects. As these capacitances are unintended by design, they are referred to as parasitic capacitances. For low-frequency transformers, parasitic capacitances do not play a major role. However, as the frequency increases, capacitive effects become significant; and with a high turns ratio, they start to dominate.

In the present example, the primary and secondary coils are distributed into sections, which is the case for most high-voltage ferrite core transformers. The voltage distribution in the coils exhibits a step change across sections. Hence, the previously described approach is not applicable to extract the capacitance matrix. To compute the primary self-capacitance in this example, we apply half of the potential (i.e., 5 V) to the lower section and full voltage (i.e., 10 V) to the upper section. Ground potential is applied to the secondary coil, and floating potential is applied to the entire surface of the core. The secondary self-capacitance is similarly obtained by applying half of the secondary induced voltage to the lower section and the full voltage to the upper section. 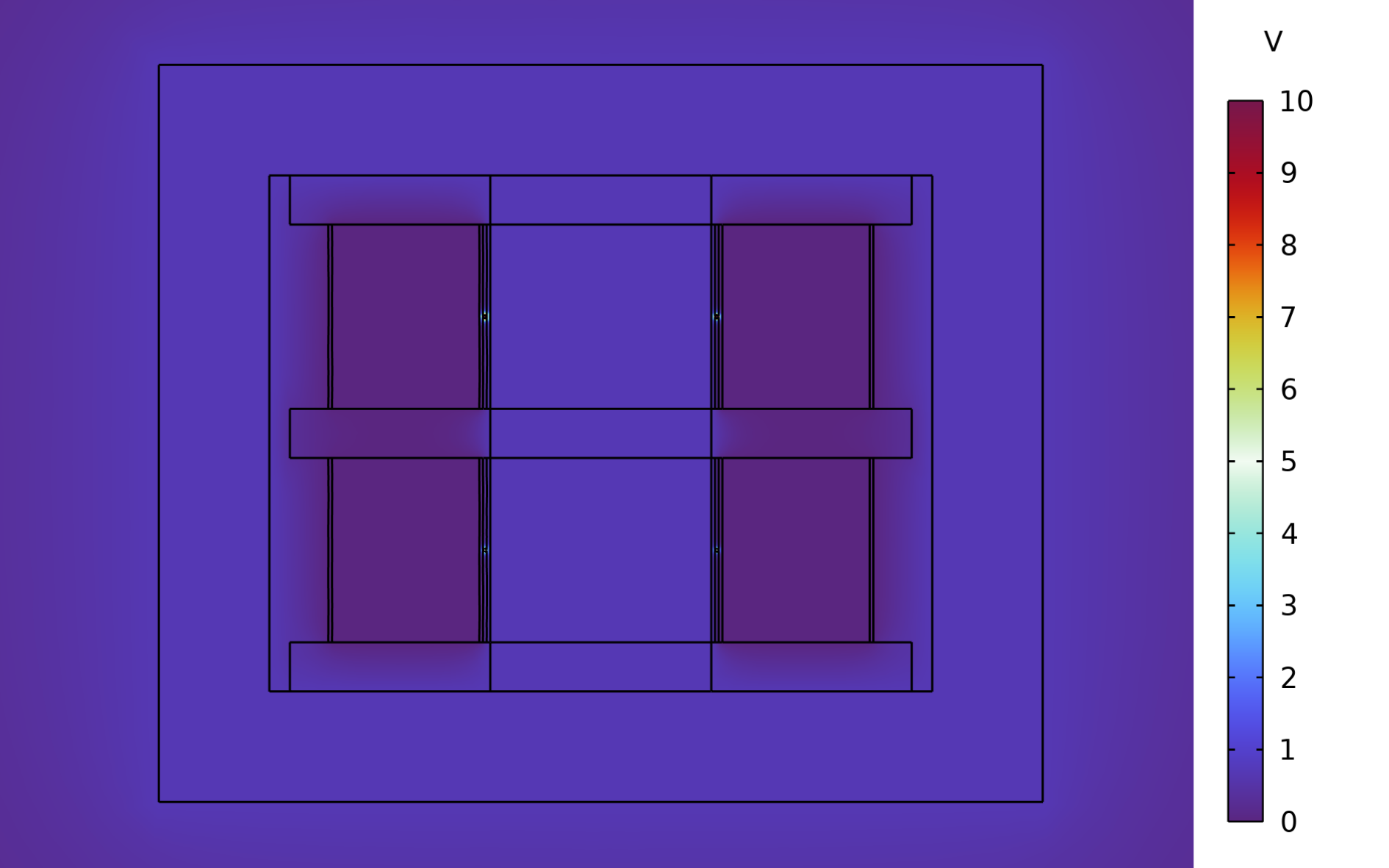 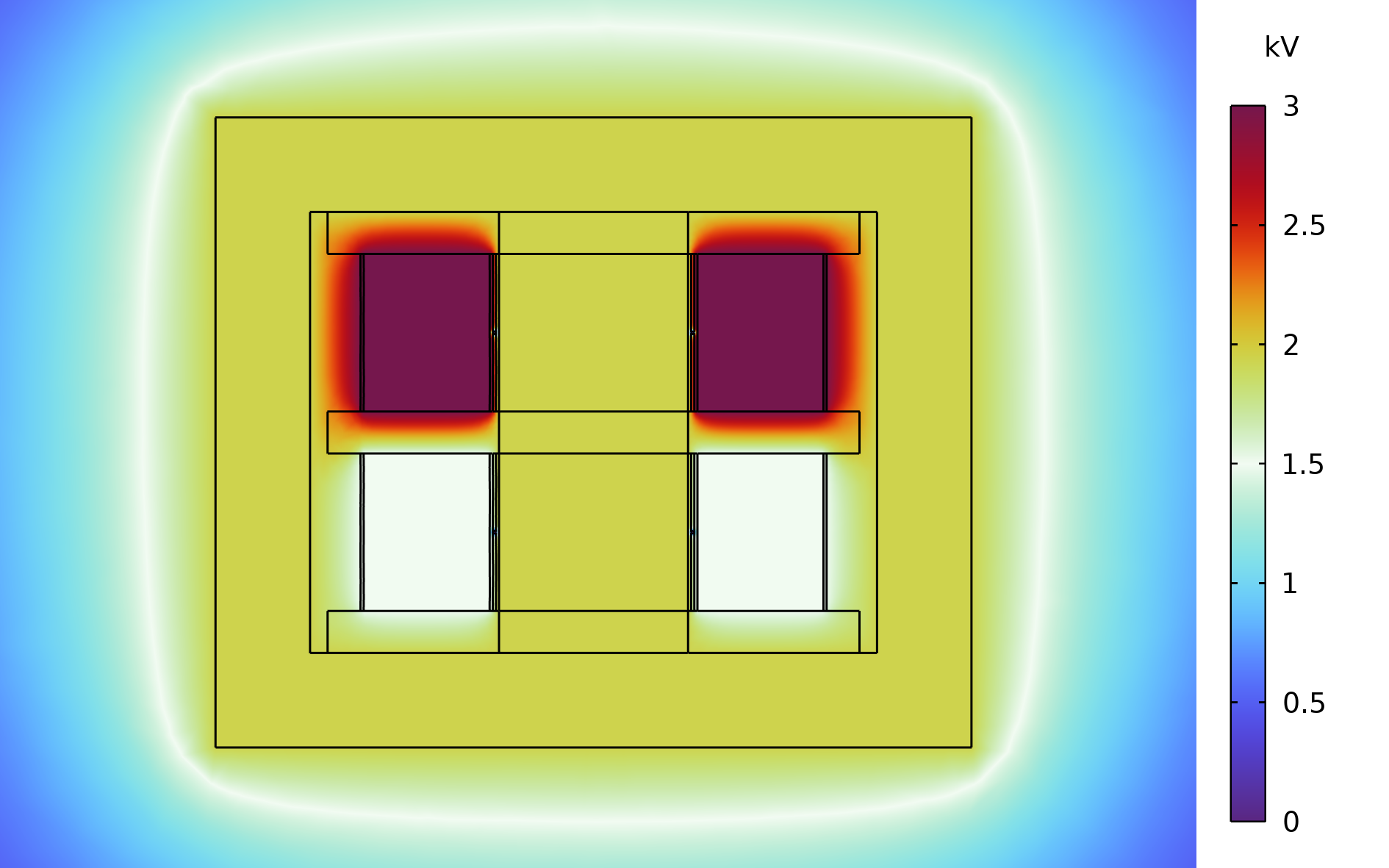 The equivalent lumped circuit of the transformer.

The leakage impedance is represented by a series combination of R_l and L_l. The magnetizing impedance is converted into an equivalent parallel combination of R_m = 2587.6 \Omega and L_m = 44.7 \mu H. The primary and secondary self-capacitances are represented by C_p and C_s, respectively. R_e is an external resistance of 1 M \Omega added to model the open circuit condition of the secondary. Simulation of the lumped circuit model predicts that the primary current has a leading angle of 82.2° and that the secondary induced voltage is 3192 V. It’s important to note that the secondary induced voltage is higher than the value that is expected when using the transformer turns ratio, which is 3000 V. This is observed due to the effect of secondary capacitance combined with the high turns ratio of 1:300. The primary current itself has a leading power factor, implying that the transformer draws a capacitive current!

A 2D axisymmetric model of the transformer is created from the 3D model by using the Cross section feature. The 300 individual turns of the secondary are additionally drawn in the geometry for the application of the RLC Coil Group feature, which is available in the Magnetic and Electric Fields interface. The secondary needs to be open-circuited so that the effects of secondary parasitic capacitance can be observed. But if the coil current is specified as zero to make it open-circuited, no current can flow through the secondary self-capacitance. To overcome this, a resistance of 1 M\Omega is connected to the secondary coil using the Electrical Circuit interface. This effectively acts like an open circuit, but allows current to flow through the secondary self-capacitance. 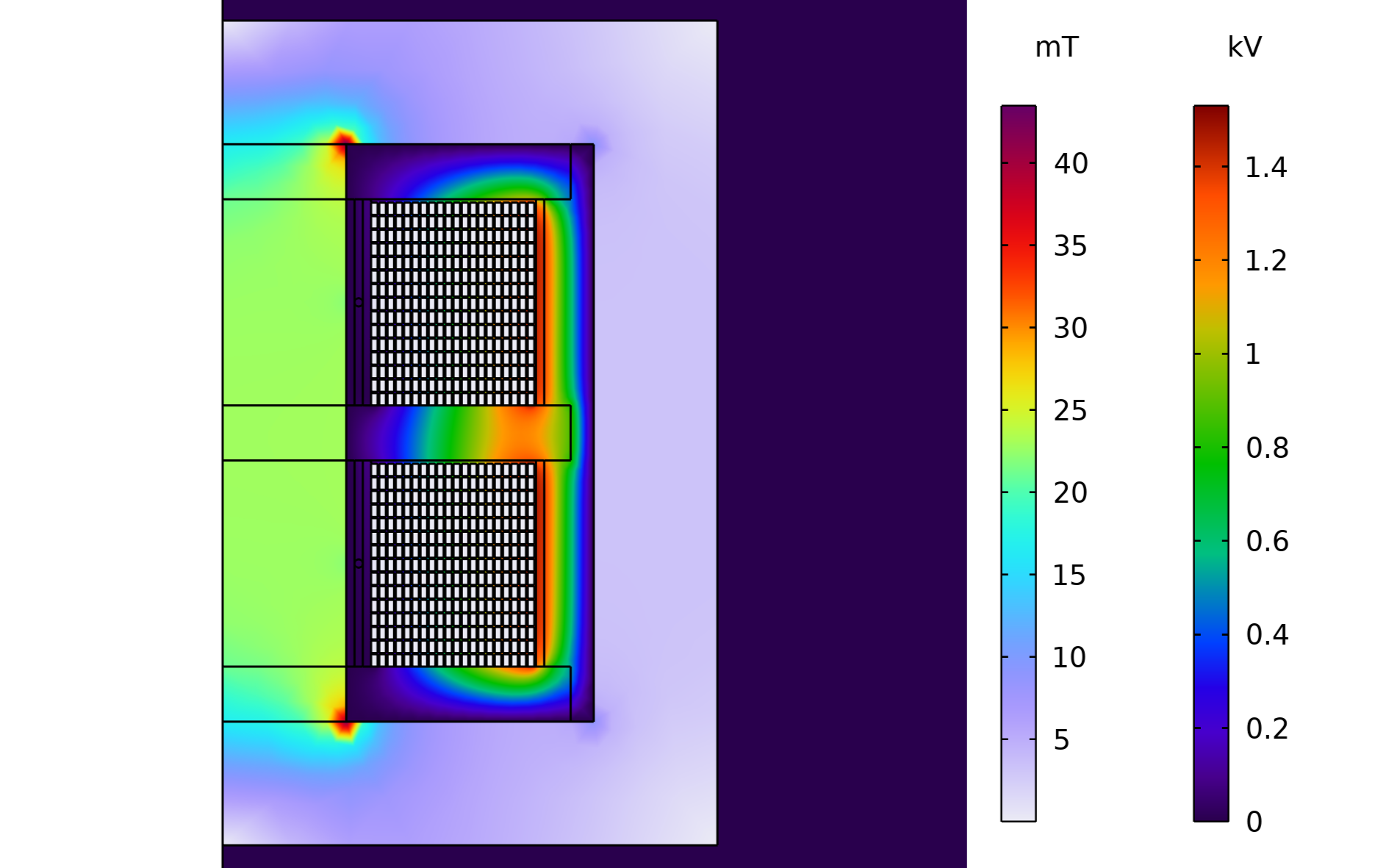 The potential distribution in the winding region of the transformer shows how the induced voltage goes on increasingly as we move radially outward. From this model, the computed primary current has a leading angle of 75° and secondary induced voltage of 3055.6 V. This is in agreement with the equivalent circuit model discussed in the previous section.

To establish the equivalence of the lumped circuit (derived using the parameters obtained from the 3D model) and the 2D axisymmetric model, the frequency response of the primary coil impedance acquired from the two approaches is plotted on the same graph. The figure below shows how the primary coil impedance magnitude and angle varies with the excitation frequency. We can observe that the 2D axisymmetric results corroborate the ones obtained from the lumped circuit analysis. The lumped electric circuit parameters are extracted from the actual 3D transformer geometry. The 2D axisymmetric model of the transformer is an approximate representation of the actual transformer geometry. These differences result in a slight deviation between the frequency responses of the primary coil impedance obtained from the two approaches. 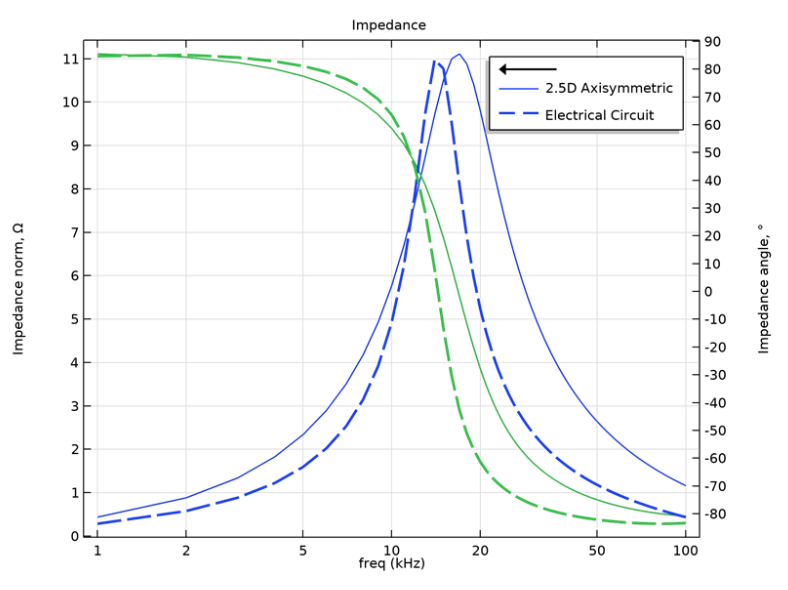 Frequency response of the transformer primary coil obtained from the electric circuit model and the 2D axisymmetric model.

Uses of the RLC Coil Group

This coil modeling feature is used when you want to analyze the effects of in-plane displacement currents. In other words, capacitive effects are to be modeled along with the inductive effects. The connectivity of the turns can be specified using the Domain ordering options. In the case of a transformer, layers of turns pile up radially, and hence column-wise order is chosen. 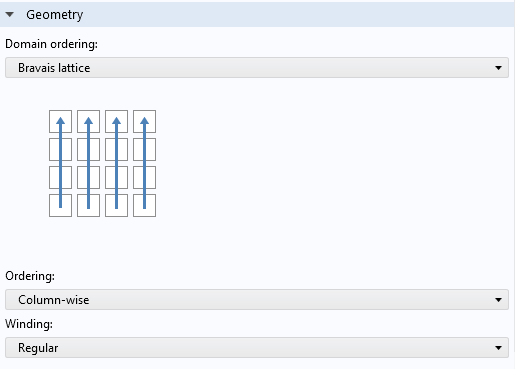 The Domain ordering options for the transformer secondary.

This example uses the built-in options for domain ordering. You can also manually specify it as illustrated in the model: Axisymmetric Approximation of 3D Inductor .

The RLC Coil Group feature enabled the analysis of a 2D axisymmetric model of the transformer incorporating both inductive and capacitive effects. Simulation of the equivalent lumped circuit as well as the 2D axisymmetric model showed some peculiar results. The computed secondary voltage was more than that expected from the turns ratio. This is similar to the Ferranti effect, found in lightly loaded transmission lines, where the receiving-end voltage rises above the sending-end voltage because of dominant capacitive effects. The primary current of the transformer was also seen to be capacitive in nature. This was due to the domination of secondary parasitic capacitance when referred to the primary by a very high turns ratio of 1:300.

Inductances and capacitances have a mutually opposing effect on the circuit current. An inductive circuit has a lagging power factor whereas a capacitive circuit has a leading power factor. If we attempt to extract the equivalent impedance of such a transformer from the terminal voltage and current, the coupled effects would lead to misleading and erroneous results. As is observed from the 2D axisymmetric model of the transformer, the secondary parasitic capacitance when referred to the primary coil dominates over the inductive effects in the resulting primary coil impedance. At 50 kHz, the transformer effectively behaves like a capacitance.

To conclude, it’s shown here how to extract the equivalent inductances of a transformer separately using analysis of magnetic field effects due to conductive and inductive currents, while ignoring displacement currents. This can be done using the Magnetic fields or Magnetic and Electric fields interface. Similarly, the parasitic capacitances of the transformer can be obtained separately through the analysis of electric fields only. This is possible through either the Electrostatics or Electric Currents interface. It is finally demonstrated how to combine the extracted quantities into a single equivalent lumped circuit model of the transformer.

Try the High Voltage Ferrite Core Transformer tutorial model yourself by clicking the button below, which will take you to the Application Gallery entry: 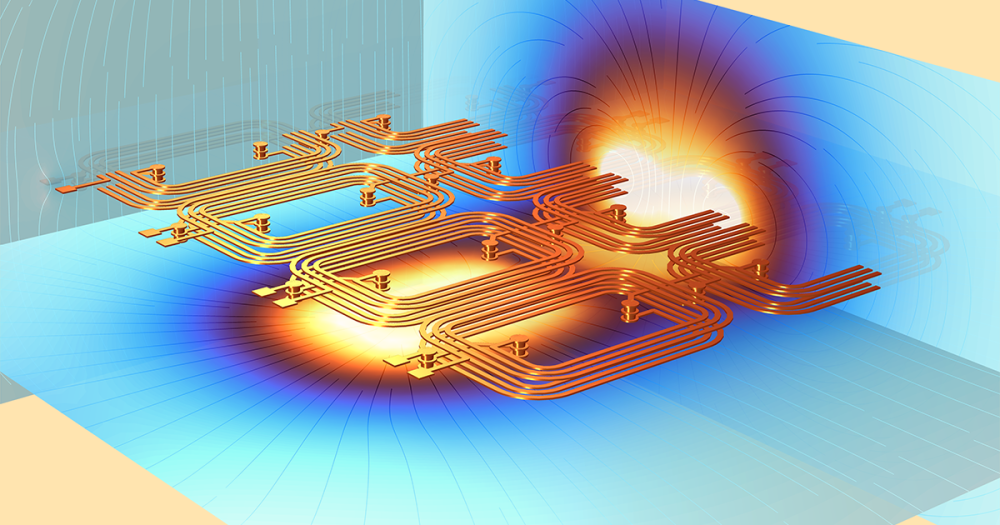 An interesting blog! I have to note though that static capacitances have little practical value. The transformer behavior (waveforms, resonant frequency, etc.) is determined by Dynamic capacitances. Maybe I missed something…
Sincerely
Alex Pokryvailo

My point was that using static capacitances one obtains Wrong frequency response (right equivalent circuit with wrong parameters). To calculate dynamic capacitance one needs to take into account dynamic voltage distribution across turns/layers, etc.
In your plot, the dotted line (circuit) shows resonance at ~15kHz. This is parallel resonance between magnetizing inductance and Cs (14.4kHz based on the blog numbers). RLC gives substantially higher resonant f, but still lower than could be expected taking into account Dynamic capacitance that it should calculate (~1/3 of static). However, the magnetizing inductance in axisym would be higher than in 3D (core cross-section is larger. I assume that you adopted mean turn length equal to 3D.)
the above does not dispute in any way value of matrices extraction.

Thank you for your inputs. In the future, we can look into a comparison of static and dynamic capacitances.