The COMSOL Conference 2013 Rotterdam came to an end last Friday. After dinner on the second day, six contributions were awarded for their outstanding work: three in the Best Paper category and three in the Best Poster category. The moderator of the awards ceremony — Belgian engineer, stand-up comedian, and COMSOL user — Filip Van den Abeele compared COMSOL Multiphysics to a Swiss Army Knife. After looking at the diversity of subjects that is displayed in the award winning papers and posters, I can only agree with his analogy.

The Best Paper winner Göran Eriksson from ABB AB, Corporate Research, Sweden, explains in his paper how to use COMSOL Multiphysics and the RF Module to approximately model thin conducting wires or cables interacting with a surrounding electromagnetic field. His idea makes it feasible to use the finite element method (FEM) for modeling electromagnetic interference in situations where, traditionally, finite difference methods are used. Although his method is non-stringent, it is able to predict currents induced by an applied electromagnetic field in wires, networks of wires, and fields radiated from antennas.

In the paper “Optimal Heat Sink Fin and Cold Lid Heights for Liquid Immersed Servers“, Abdulmajeed Almaneea from the University of Leeds, UK, presents his research on a closed server that is filled with Novac dielectric cooling liquid. The goal here was to determine the optimum value of the fin and cold lid height in order to reduce the CPU temperature. The selection process for the 30 cases to be investigated used an Optimal Latin Hypercube (OLH) design of the experiment. The optimal solution he found (using a genetic algorithm) showed a 22% decrease of the CPU temperature.

The third Best Paper award winner Silvia Bersan from the Politecnico di Milano, Italy, discusses in her paper how to model piping in granular material. As we find out in the paper, piping is a type of internal erosion that occurs beneath water retaining structures that lay on sandy soil. Silvia Bersan set up a small-scale physical model in the laboratory in order to try to reproduce the erosion channel growth that occurs in the sand. Additionally, she developed a finite element model that represents the physical model. Her paper presents the comparison among modeling strategies, whereby we can see that laminar flow in the erosion channel can be modeled very efficiently using Darcy’s law and the Fracture Flow interface. 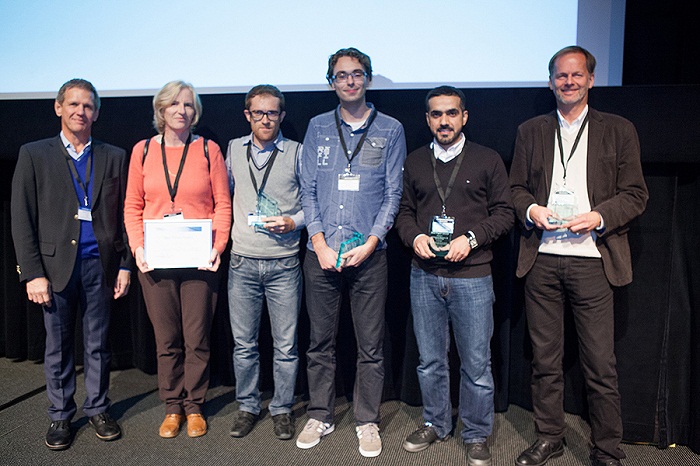 On stage: Svante Littmarck, CEO of the COMSOL Group, and the award winners at the COMSOL Conference 2013 Rotterdam.

Best Posters Take You from Melting Chocolate to Outer Space

The poster with the most votes for the Popular Choice award was presented by Brigitte Watzke from the Nestlé Research Center, Switzerland. Attendees’ votes were guided by the delicious subject of her poster: chocolate. Her poster describes the modeling of the melting process of differently-shaped pieces of chocolate and the influence this shape has on the release of cocoa aromas. Let’s hope they use this knowledge to make even better tasting chocolate!

While Brigitte’s poster is concerned with melting sweets, the second award-winning poster, presented by Chris de Jonge from SRON Netherlands, Institute for Space Research, involves a completely different area — outer space. His poster discusses the design of a calibration source for the SAFARI Imaging Spectrometer, a part of the SPICA satellite payload.

From outer space we move to nuclear waste storage, the topic of the poster of the third and final Best Poster winner, Piergianni Geraldini from Sogin S.p.A, Italy. He models the operation of industrial dehumidifiers in order to control the corrosion of the drums containing nuclear waste for the design of storage facilities.

I enjoyed seeing so many different applications of COMSOL Multiphysics, and I hope that you will also appreciate the work of this year’s award recipients. Once again, congratulations to all of you!