The simple design of a Pratt truss bridge makes it useful to hold everything from pedestrians to trains. While this type of bridge is easy to construct, engineers must make sure that it lasts and is safe to use. A bridge needs to hold its own weight, support the load placed upon it, and withstand frequencies generated by wind and earthquakes. To determine whether a Pratt truss bridge design can handle these factors, we turn to simulation.

A Brief History of the Pratt Truss Bridge

Caleb and Thomas Pratt, a father-son duo from Boston, MA, designed the first Pratt truss bridge in 1844. The original bridge was made of wood with iron diagonal rods, but they switched to making the bridge entirely out of iron shortly after they patented the design.

The Pratt truss bridge’s initial use was to carry trains, replacing railway bridges made of stone or timber. Compared to these older versions, the main advantage of this type of bridge was its low construction costs. The iron could be transported to the building site where it would be assembled with only semiskilled labor. 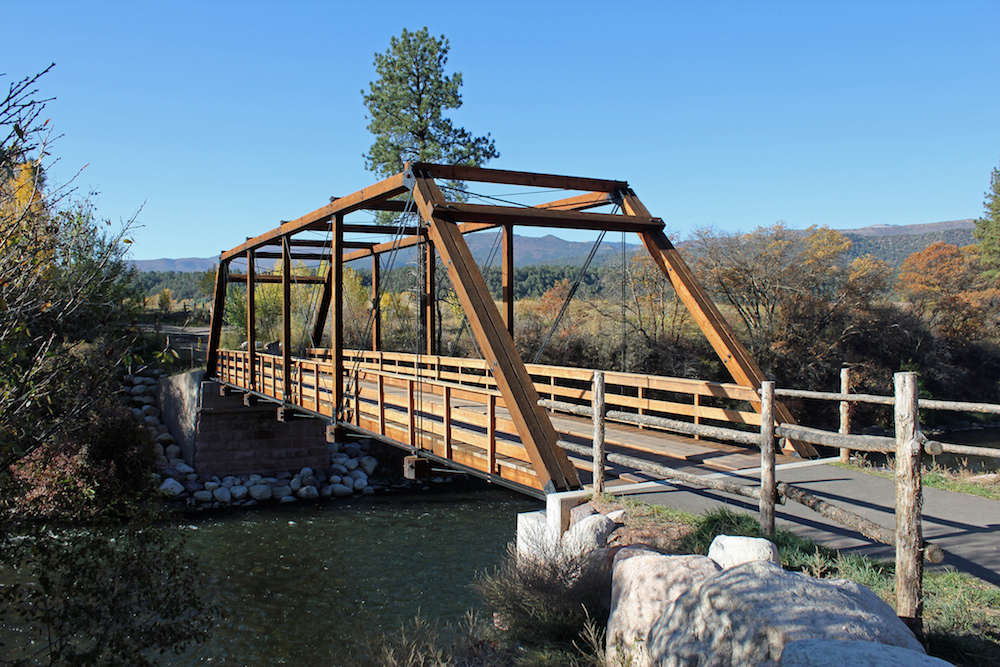 The bridge’s vertical and diagonal beams handle the compressive and tension forces, respectively. The shorter, vertical beams would normally risk buckling, but including the diagonal beams eliminates this worry. This, in turn, allows for thinner diagonal beams, resulting in reduced material costs.

Simulating a Pratt Truss Bridge in the Structural Mechanics Module

To model a Pratt truss bridge, we can use COMSOL Multiphysics and the Structural Mechanics Module to create a frame structure out of steel with shell elements representing a concrete roadway. 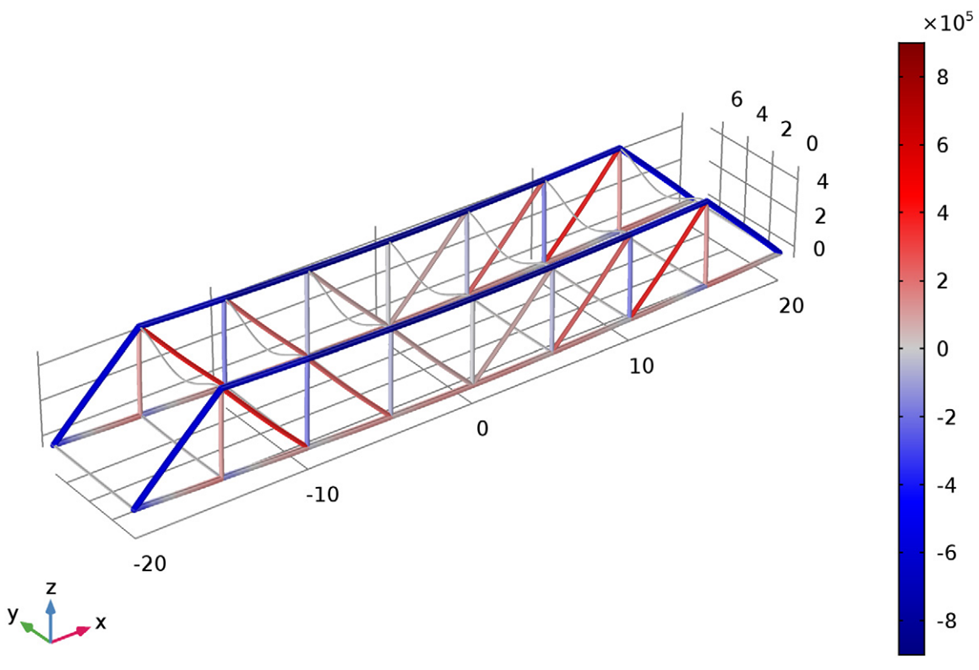 The axial forces in the beams. Red is tension and blue is compression.

To ensure the bridge moves properly, we need to add constraints as we create the model. Constraining all translational degrees of freedom at the leftmost horizontal edge prevents any rigid body motion. When studying the bridge’s thermal expansion, we can also add constraints to enable it to expand or contract only in the axial direction.

After building the model, we perform two different analyses on the Pratt truss bridge. The bridge is exposed to a pure gravity load as well as trucks passing over it, so we first evaluate the stress and deflection fields to see if it can sustain those weights. Second, an eigenfrequency analysis shows the eigenfrequencies and eigenmodes of the bridge. By studying eigenfrequencies, we can account for excitation and frequency content such as wind loads and earthquakes. 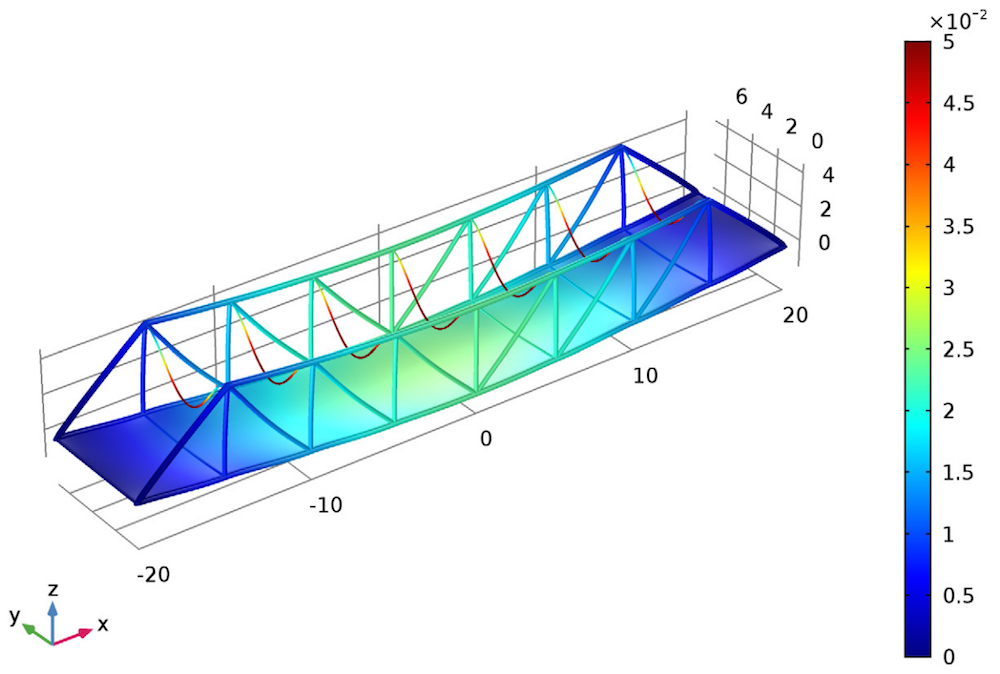 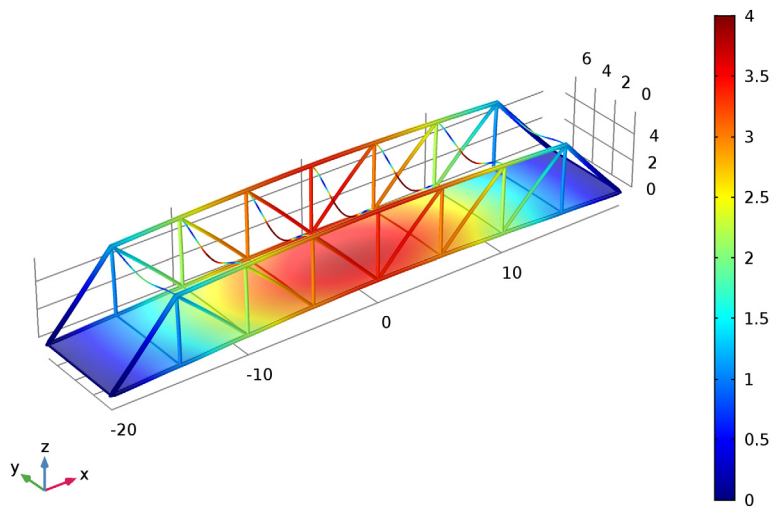 Left: Deformation of the truss bridge under self weight. Right: The bridge’s 10th eigenmode, which is the fundamental mode for the roadway.

Changing any of the Pratt truss bridge’s dimensions or materials affects its ability to handle loads. To determine if a design remains stable, we can use simulation to analyze the loads and eigenfrequencies. By making any necessary adjustments, engineers can ensure that their bridge is safe to use.

Learn More Ways to Ensure Your Truss Structure Is Stable

Editor’s note: This post was updated on 8/4/16 to include further information on the Pratt Truss Bridge tutorial model. 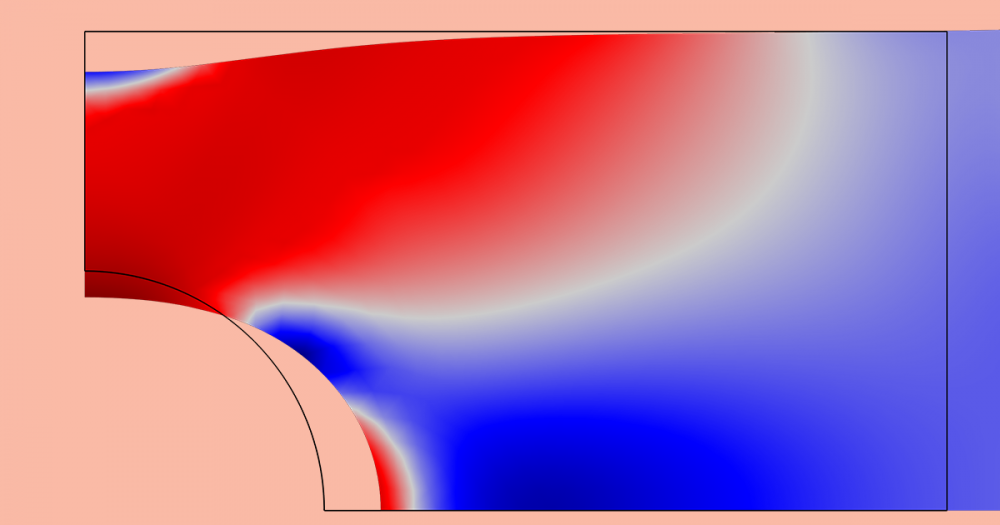 How to Implement Elastoplasticity in a Model Using External Materials