There is a lot we know about the brain, and a lot we don’t. Optogenetics is a relatively new area of study in which light is used to stimulate brain activity and study neurological behavior. Stimulating neurons with light is more precise than electrical stimulation — and safer. Researchers from Massachusetts Institute of Technology (MIT) used simulation to design an optical probe that can be implanted into the brain to stimulate nerve impulses. 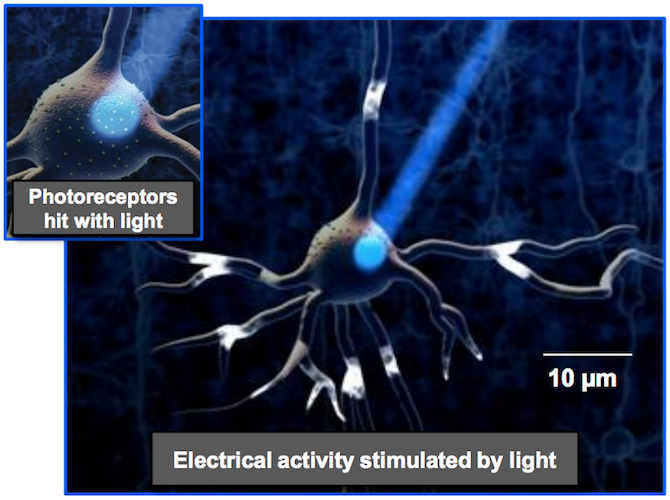 A close-up view of optogenetics. Image by S. Berry and taken from his COMSOL Conference 2017 Boston presentation.

How does optogenetics work? Neurons are genetically modified to release light-sensitive membrane proteins, making the brain susceptible to selective photoexcitation. When stimulated by light, these proteins transport ions into (or out of) the targeted neurons, which excites electrical responses that trigger nerve impulses in the brain.

Shining a Light on Brain Activity and Treatment

As the functions of the brain are vast, so are the behaviors and treatments that optogenetics can facilitate. For instance, optogenetics can be used to treat neurological and psychiatric disorders like depression and schizophrenia — a significant improvement over controversial early treatments like lobotomies and electroconvulsive therapy (ECT).

Optogenetics can potentially be used to treat Parkinson’s disease, a degenerative brain condition that affects the central nervous system and causes tremors and shakes. Also, when testing the effect of optogenetics on laboratory mice, researchers found that it can treat heart arrhythmia and hearing loss. 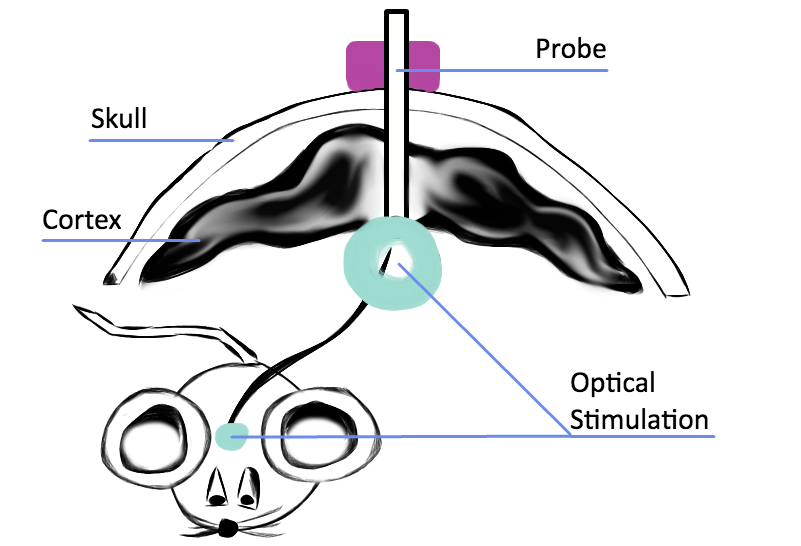 In a more experimental application, researchers are looking into how optogenetics can help us understand the formation and consolidation of memories. Optogenetics could change the way we perceive and catalog past experiences. Think of the 2004 science fiction film Eternal Sunshine of the Spotless Mind: A couple experiences a tumultuous breakup and undergoes a procedure that erases all memories of their relationship, only to meet and start dating again as “strangers”.

Designing a Microlens for an Implantable Optical Probe

A research team from MIT aimed to optimize the design of an optical probe using simulation. Their probe design includes a microlens with a liquid-liquid interface of oil and water. The lens must be able to provide both active focusing and beam steering in a single optical element in order to deliver light from the probe to the neurons. The researchers used the COMSOL Multiphysics® software to analyze the size of the liquid microlens as well as the angle and depth of its taper. They presented their findings at the COMSOL Conference 2017 Boston, where they won a Best Paper award. 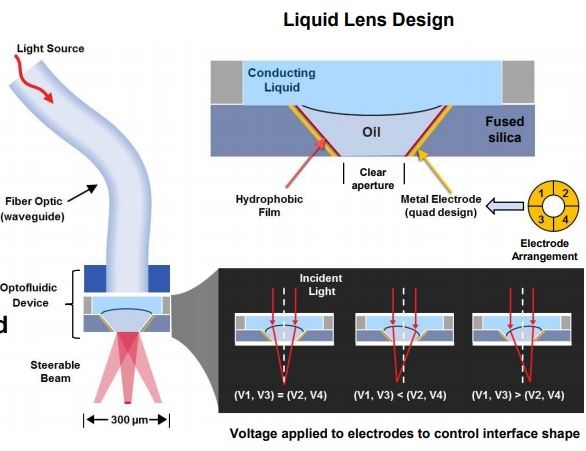 A schematic of the microlens design. Image by S. Berry and taken from his COMSOL Conference 2017 Boston presentation.

The optical probe’s microlens can achieve both focusing and steering through the electrowetting effect in which electrodes are used to focus the lens and direct the light to the targeted cell.

The researchers modeled two-phase flow in the microlens using the level set method in COMSOL Multiphysics. This method helped them determine the location of the fluid interface and define the fluid domain. These initial results were used to simulate the fluid motion in the lens over time.

For the first time-dependent simulation, the same voltage was applied to the left and right taper walls (VL and VR) to find the resulting contact angles. When comparing the contact angle to the applied voltage, the researchers were able to see which taper angles (α) and voltages (V) cause concave and convex liquid-liquid interface profiles. Concave profiles result in a negative optical power for the probe, while convex profiles lead to a positive optical power. 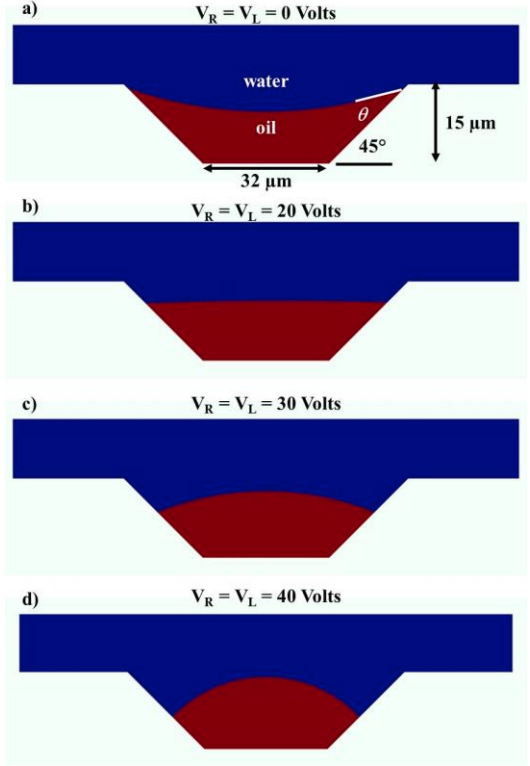 Equal voltage is applied to the left and right walls of the taper. Different voltages for a taper angle of 45° cause convex, concave, and flat liquid-liquid interface profiles. Image by S. Berry, S. Redmond, P. Robinson, T. Thorsen, M. Rothschild, and E.S. Boyden and taken from their COMSOL Conference 2017 Boston paper.

Next, the research team turned their attention to the focusing of the probe. They used simulation to analyze the lens size, liquids that make up the lens interface, and voltage through electrowetting. The results show that a steeper taper angle causes a smaller dynamic range for the operating voltage. For instance, for a 75° taper angle, the microlens only has a positive optical power between 34 and 40 V. 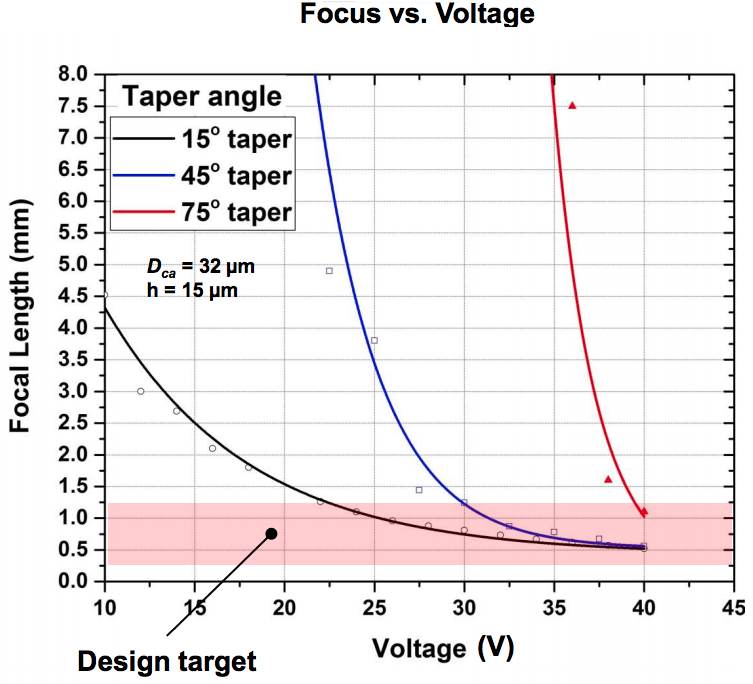 With a taper angle of 75° (red line), the microlens must operate between a range of 34 and 40 V to have a positive optical power. Image by S. Berry et al. and taken from their COMSOL Conference 2017 Boston paper. The data points are calculated from the simulations while the curves are interpolated to the simulation results.

The third simulation dealt with focusing and steering combined. To happen simultaneously, these effects require the liquid microlens to be curved. With a curved shape, the lens can maintain a spherical profile while being shifted. To study the profile, a fixed voltage was applied to VL and a voltage sweep was applied to VR. The results highlight the importance of the taper cavity’s geometry as well as the ability to apply different voltages to the taper’s different walls. 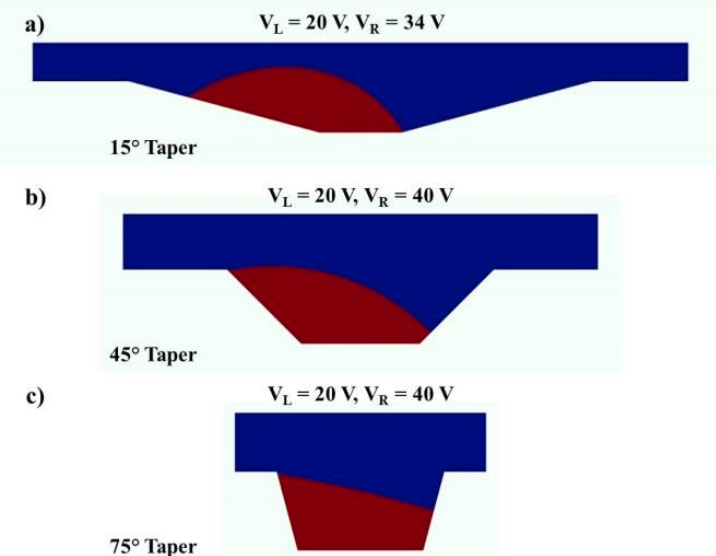 Liquid-liquid interface profiles for microlenses with different taper angles and different voltages applied to each side of the taper. Image by S. Berry et al. and taken from their COMSOL Conference 2017 Boston paper.

As the taper angle neared 90°, the researchers observed that the liquid-liquid interface became flat and acted like a prism. If the sole goal was beam steering, this would be an ideal behavior — but optogenetics requires both beam steering and focusing.

To determine the operational space of the liquid microlens, the researchers compared the steering angle and focal length of the lens. Both of these values were calculated with the radius of curvature from the liquid-liquid interface profile found via the simulation, combined with the ray transfer matrix method. 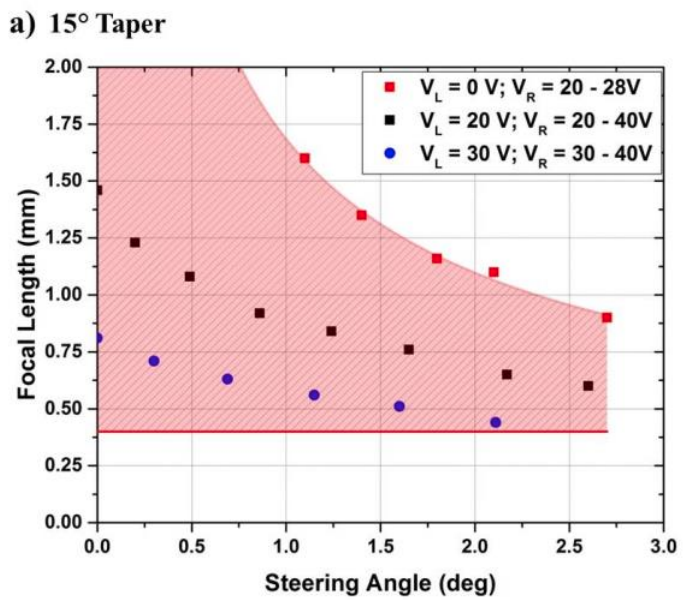 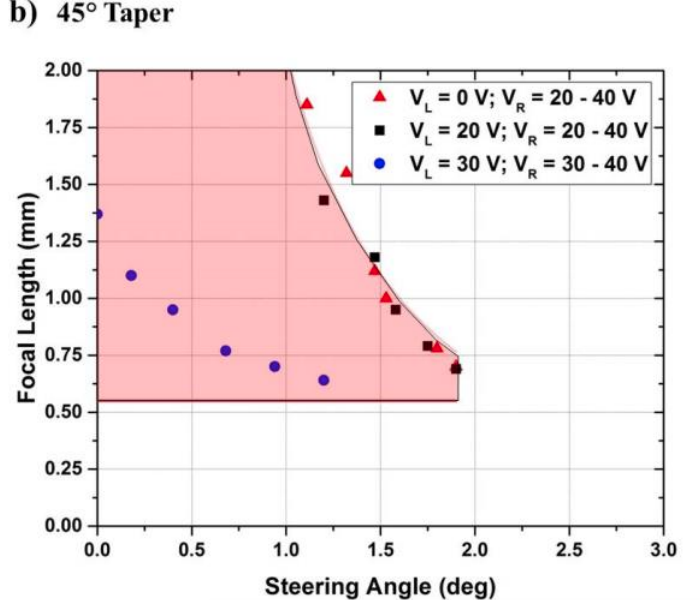 With these simulations, the research group learned about the behavior of the microlens when the geometry and operating conditions change. Using models and simulations, the team arrived at a decent design that was relatively easy to manufacture. They plan to use these analyses as a starting point for more complex research into optical probe microlenses, including performing 3D simulations of their optical probe designs beyond 2D models. With an optimized probe for optogenetics, we could see advanced brain research and treatment in the near future.

Get more details in the full paper from the COMSOL Conference 2017 Boston: “Liquid Microlenses with Adjustable Focusing and Beam Steering For Single Cell Optogenetics“