SAWs are also used to Manipulate and Mix

I have always connected Surface Acoustic Waves (SAWs) as phenomena useful for sensors; where SAW devices act as the medium that transfers mechanical energy (of what you’re measuring) to electrical (what’s used to measure it). SAWs would occur at the surface of a piezoelectric device, mechanically changing it, and then the resulting electrical behavior would be used to provide the measurement. We have a great example that shows how such things can be modeled in a SAW gas sensor. 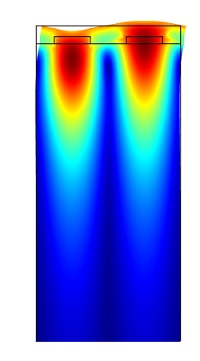 Then, reading an article from The Economist Technology Quarterly, I see that these acoustic waves are also used for manipulating and activating other phenomena. Specifically, the article suggests that the sound waves can be used in medical diagnostics and drug delivery thanks to their ability to manipulate very small droplets of fluid. If aimed right, a small droplet can be turned into a mini-centrifuge — and separate substances found within the droplet. The Economist then goes on to report that SAWs can be used for other applications, such as to create mixing in microfluidics. Achim Wixforth, a physicist at the University of Augsburg in Germany, discovered in 1999 that if placing small amounts of liquid in the path of SAWs the liquid would stir. This, he realized, could speed up analysis of DNA microarrays if reagents were mixed using acoustic waves. That led Dr Wixforth to the realization that polymerase chain reaction (PCR) can be carried out 50% quicker if the fluids are mixed and guided around the lab-on-a-chip device using SAWs.

Now, a group out of the University of Glasgow has figured out how to achieve the end-to-end polymerase chain reaction (PCR) process with just one piezoelectric source. The aim is to create cheap instruments, powered by mobile phones, which can eventually detect malaria and other viruses in places that lack reliable access to electricity, such as parts of Africa. Exciting stuff. (Read more about this fascinating project in The Economist).