Locating and removing landmines and other improvised explosive devices (IEDs) is an important yet challenging task, especially with new advancements in cloaking technology. Using COMSOL Multiphysics® software, one team of researchers studied electromagnetic detection for subsurface objects to better understand the technique and improve its accuracy.

Detecting and Removing Landmines and IEDs

The detection and removal of landmines and IEDs is important for both humanitarian and military purposes. While the term for the process of detecting these mines — minesweeping — is the same in both cases, the removal process is referred to as demining in times of relative peace and mine clearance during times of war. The latter case refers to when mines are removed from active combat zones for tactical reasons as well as for the safety of soldiers.

When a war ends, landmines may still be in the ground and detonate under civilians, leading to casualties. The majority of the mines are located in developing countries that are trying to recover from recent wars. Aside from being politically unstable, these countries are unable to farm viable land that is strewn with IEDs, keeping their economies in poor positions. Unfortunately, finding and removing the dangerous devices can be rather difficult. 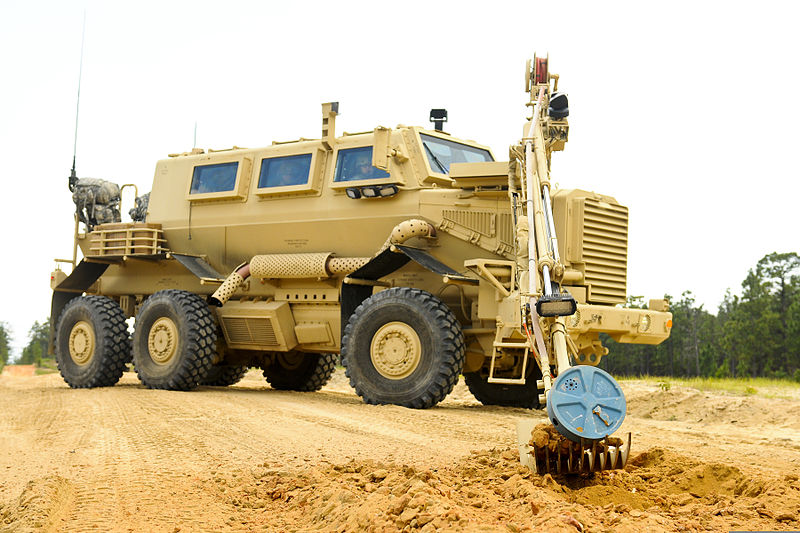 A U.S. Army detection vehicle digs up an IED during a training exercise.

In efforts to locate and remove landmines, a mechanical approach is one option. With this method, an area with known landmines is bombed or plowed using sturdy, mine-resilient tanks to detonate them safely. For a more natural approach, dogs, rats, and even honeybees are trained to detect landmines with their sense of smell, and they are usually too light to trigger detonation. Biological detection methods offer another option, utilizing plants and bacteria that change color or become fluorescent in the presence of certain explosive materials. Once the mines are detected, they are safely removed from the area. 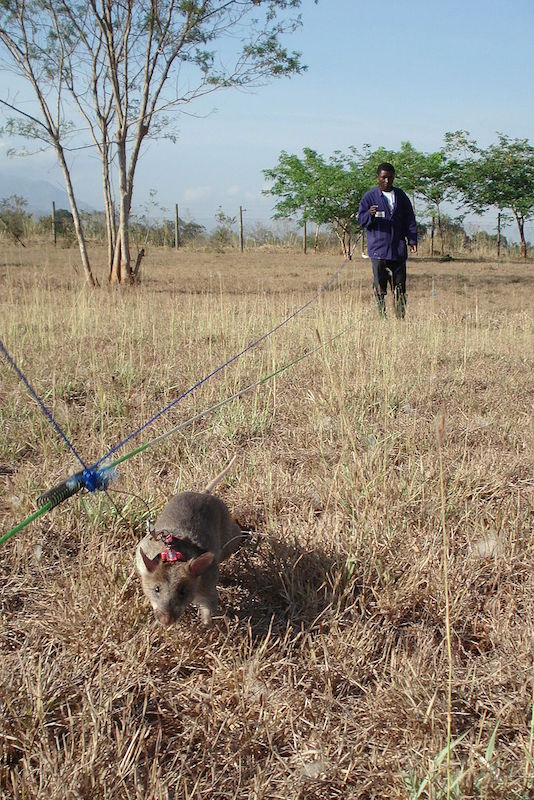 A trained rat searches for landmines in a field.

GPR involves sending electromagnetic waves into a subsurface (the ground) through an antenna. The transmitter of the antenna sends the waves, and the receiver collects the energy reflected off of the different objects in the subsurface, recording the patterns as real-time data. 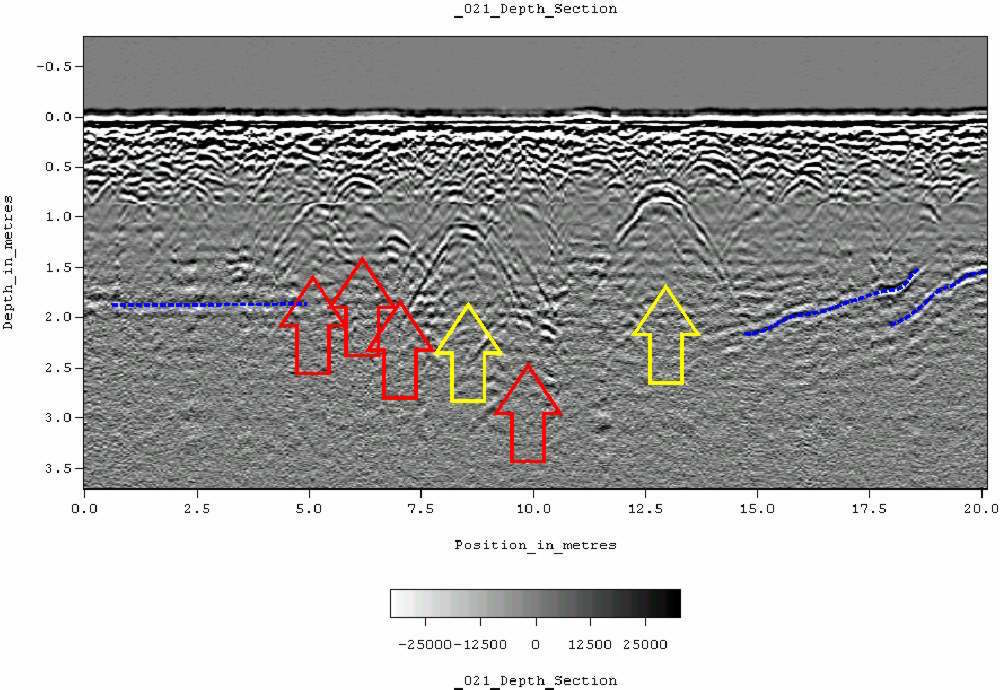 Data from a traditional GPR scan of a historic cemetery.

With recent developments in landmine cloaking technology, identifying buried objects through traditional GPR has become more challenging. Dr. Reginald Eze and George Sivulka from the City University of New York — LaGuardia Community College and Regis High School sought to improve electromagnetic IED detection by testing the method under different variables and environmental situations. By creating an intelligent subsurface sensing template with the help of COMSOL Multiphysics, the research team was able to determine better ways to safely locate and remove landmines and IEDs.

Let’s dive a bit deeper into their simulation research, which was presented at the COMSOL Conference 2015 Boston.

Simulating an Electromagnetic Detection Method for Landmines and IEDs

When setting up their model of the mine-strewn area, the researchers needed to ensure that they were accurately portraying a real-world landmine scenario. They started with a basic 2D geometry and defined the target objects and boundaries. The different layers of the model featured:

The physical parameters in the model included relative permittivity; relative permeability; and the conductivity of the air, dry soil, wet soil, and TNT (the explosive material used in the landmine).

Using the Electromagnetic Waves, Frequency Domain interface in the RF Module, the team built a model consisting of air, soil, and the landmine. Additionally, a perfectly matched layer (PML) was used to truncate the modeling domain and act as a transparent boundary to outgoing radiation, thus allowing for a small computational domain. A transverse electric (TE) plane wave was applied to the computational domain in the downward direction. The scattering results were analyzed via LiveLink™ for MATLAB®. 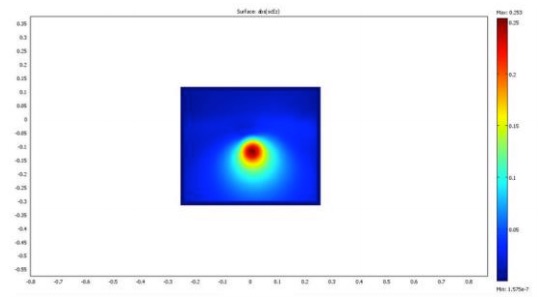 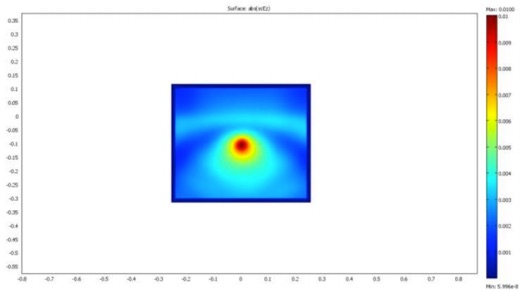 The scattering effect of a wave on a landmine in wet soil (left) compared to dry soil (right).

The research team studied the radar cross section (RCS), which quantifies the scattering of the waves off of various objects. Their studies were based on five key factors:

A parametric sweep used to identify the optimal frequency for a landmine detection system.

The simulation results pointed out the differences in scattering patterns depending on the parameters. For example, as the depth of the target increased, the scattering effects became more negligible. The relation between how deep the mine was buried and the scattering showed a clear connection to the soil’s interference with the wave.

The results also showed that dry soil has more interference with the RF signal than wet soil. Both the size and depth of the mine were related to the amount of scattering. For instance, the more shallow the mine was buried, the more easily it was detected. The parameter sweep of the frequencies indicated that the optimal frequency to detect anomalies in the subsurface scan was 2 GHz. 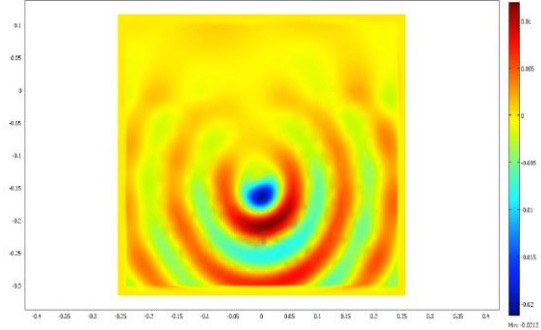 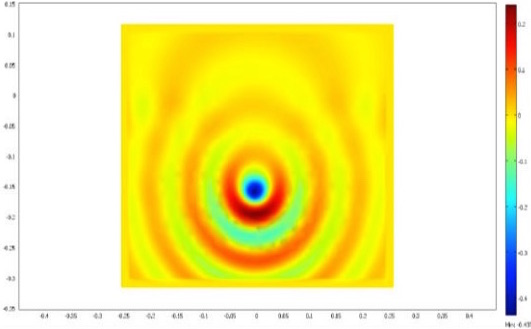 Studying the parameters and their effects on the scattering patterns of the waves offers insight into the objects that are being detected, including their chemical composition. Such knowledge makes it easier to identify an object, whether a TNT-based landmine, another type of IED, a rock, or a tree root.

Through simulation analyses, the researchers gained a more comprehensive understanding of the microphysical parameters and their impact on the scattering of waves off of different objects. This gave them a better idea of the remote sensing behavior, offering potential for increased accuracy in landmine detection and removal. Such advancements could lead to safer environments, particularly within developing areas of the world. 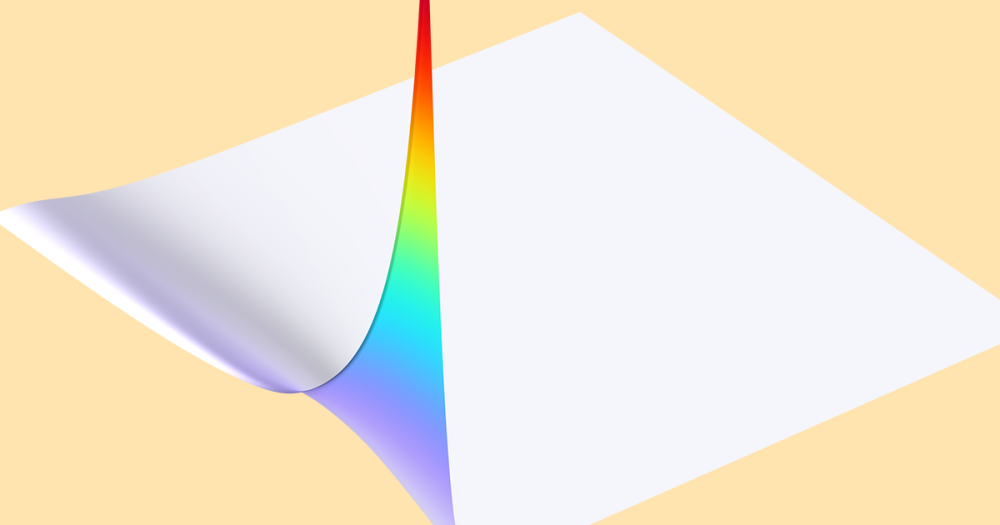 I want to simulate 2D GPR in time domain with a ricker point source. But I’m confused how to add point source to the domain. Could you help me please?