Have you ever pinched a nerve? It can feel like getting struck by a small lightning bolt, but thankfully, the pain often tends to fade within a few days. Those who experience more serious damage aren’t so lucky, though, and the pain can last for months on end. Drug delivery systems, such as nerve guides, can help accelerate the healing process. When designing such devices, bioengineers need a thorough understanding of the drug reaction kinetics. That’s where simulation comes in…

Nerves act as the body’s control and messaging system, enabling us to smile and wave as well as telling us when something feels too hot. When one of these cells get pinched, stretched, or otherwise injured, that area starts sending distress signals, resulting in sensations ranging from slight discomfort and stiffness to tingling numbness and sharp pain.

Wearing a wrist brace can help alleviate the symptoms of carpal tunnel syndrome, a common condition caused by pressure on the median nerve.

When nerve damage is severe, doctors must work to repair the nerve as soon as possible. One way to do so is by implanting a nerve guide. Nerve guides help the nerves grow back correctly, making sure that the pathways don’t get tangled while the tissue heals. They can also be designed to deliver drugs onsite in order to ease the pain and speed up the healing process. These small devices, which don’t leave much of a scar, can also be made of biodegradable biomaterials, so they don’t even need to be removed.

Nerve guides take advantage of the human body’s healing mechanisms to control where the drug is released. When tissue is damaged, it produces an enzyme. Once a nerve guide is inserted, this enzyme slowly eats away at the material surrounding the drug. The part closest to the tissue degrades the quickest, so the drug is “guided” toward the injured nerve.

As with any drug delivery device (like transdermal drug delivery patches), controlling the behavior of the drug reaction is critical for nerve guides. For instance, bioengineers must make sure that the drug release remains steady over time, never becoming too much (avoiding “burst releases”) or too little, for patient safety and comfort. Understanding this behavior can be difficult, though, as it’s affected by several aspects, including:

To gain insight into how these factors affect the drug reaction kinetics, bioengineers can use simulation. In the next section, we take a look at an example built with the COMSOL Multiphysics® software and add-on Chemical Reaction Engineering Module.

This model consists of damaged nerve cell tissue, a biomaterial matrix that represents the nerve guide, and a medium that surrounds both. In the biomaterial, the drug molecules are attached to peptides that are in turn bonded to the matrix.

You can analyze the drug reaction kinetics in two parts: a perfectly mixed environment and a space-dependent environment. The first, which is in 0D, only solves for the drug reaction kinetics over time, using the Reaction Engineering interface to describe the reacting system. As for the space-dependent system, it shows how the drug moves into the damaged tissue via the Transport of Diluted Species interface, which tracks the movement of the molecules. Here, the nerve guide has a cylindrical geometry in 3D, as shown below; however, you can reduce the model to 2D by taking advantage of the axial symmetry. 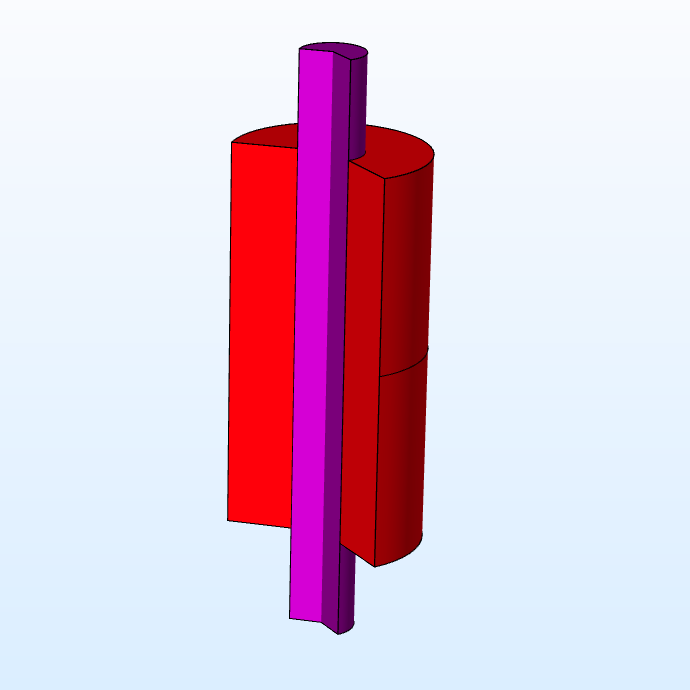 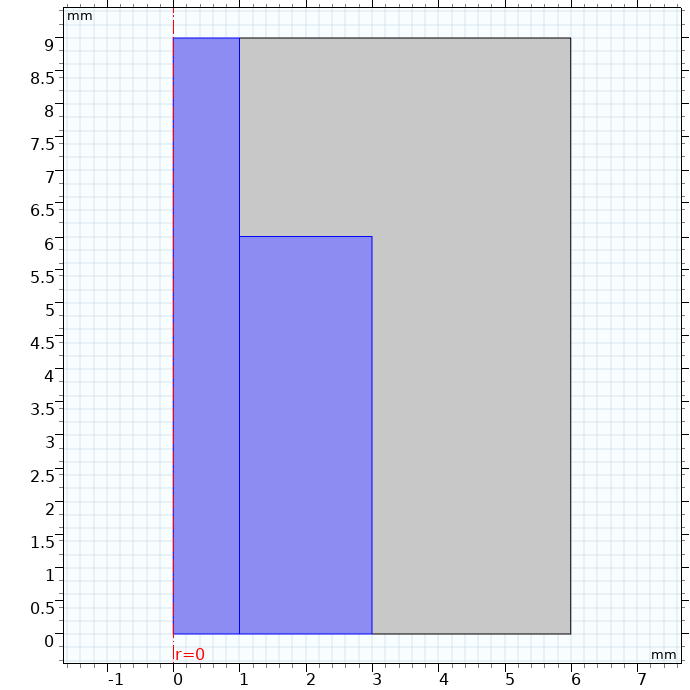 Space-dependent model of the nerve cell, biomaterial nerve guide (red in the left image), and surroundings in 3D (left) and 2D (right).

To examine how the molecules are freed over time, two types of drug release mechanisms are examined via the 0D model:

As for the 2D simulation, you can examine how the drug spreads in the model over time, determining whether the guide helps the drug to properly target the damaged nerve.

Note that multiple types of reactions are possible in the matrix. While we don’t go into detail about modeling these reactions in this blog post, you can see how to account for them in the Drug Release from a Biomaterial Matrix tutorial documentation.

Evaluating the Drug Reaction Kinetics in the COMSOL® Software

Below, you can view how the concentration of the different molecules changes for this nerve guide design over time. At the start of the simulation, you can see the first mechanism in action: the drug simply dissociating. As the image below shows, the number of matrix-bound drug-peptide species quickly begins to fall, while there’s a rise in the number of matrix-bound peptide species. These changes are also reflected in the rapid rise of the drug’s concentration, which reaches its maximum amount (~7.71 mol/m3) in just 0.03 seconds.

As the biomaterial degrades, which takes ~5000 seconds in total, the second mechanism of drug release comes into play, occurring between 10 and 5000 seconds. The results show a dramatic increase in the unbound species, particularly the peptide, and a corresponding decrease in the bound species. However, the drug’s concentration remains constant throughout these changes. As mentioned above, this steady release is crucial to the design of a nerve guide, since variations in the drug dosage could pose a serious risk to patients. 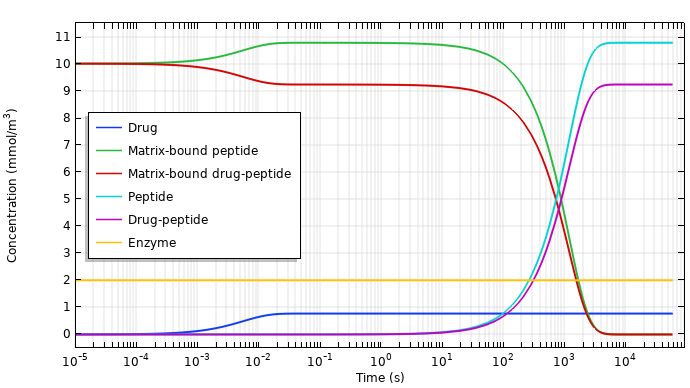 Concentrations of the species during drug release.

It’s clear that the drug release is even, so next up, let’s take a look at how the drug diffuses to the nerve and the surrounding area.

As the animation below shows, you can view the distribution of the drug concentration throughout the different domains over time. The enzyme originates from the cell tissue, so it helps direct the drug toward the damaged nerves as the biomaterial degrades. By the end of the simulation, the maximum concentration is in the center of the nerve, meaning the guide successfully delivers the drug. In addition, it is possible to view the degradation of the biomaterial over time, although this is not shown here.

Concentration of the drug in the nerve cell tissue, nerve guide, and surroundings.

Bioengineers can examine the drug reaction kinetics for the design of nerve guides and other drug delivery systems. By creating models like this one, it’s possible for them to test different design parameters (like time, geometry, affinity of the species, etc.) to see what affects the drug release behavior and by how much. Engineers could even evaluate how a mixed biomaterial affects the results, using this and the other information provided to optimize their overall design.

To get started with modeling drug reaction kinetics, click the button below. This will take you to the Application Gallery, which includes step-by-step documentation and an MPH-file.