Surface engineering is a key technology used in a wide range of sectors in industry. Among other techniques, it involves adding functionality to a surface. This can be performed by creating a specific topography to a surface using laser texturing. The objective of the work presented in this paper is to build an application using COMSOL Multiphysics® to predict the topography produced given the set of laser parameters as well as the material properties of the sample to be textured.

To this aim, a 2D-axisymmetric time dependent model is developed. The energy distribution deposited on the surface by the laser is assumed Gaussian. The temperature distribution is computed in the component using the Heat Transfer module in COMSOL Multiphysics®. The very short deposition of the energy is modelled using a time-dependent function that releases the energy during the pulse only. An important feature of the model is the use of the convective flux boundary condition to force the top surface of the heat material to remain at vaporization temperature. The ablation of the material is simulated using the deformed geometry option available in COMSOL Multiphysics®. The mesh is moved by computing the mass flux leaving the liquid-gas interface from the heat energy lost by vaporization. The material considered in this paper is AISI 316L stainless steel for its wide use in industry.

The application of the model is twofold. First, the influence of the laser parameters such as power, frequency and impact duration on the final topography is assessed. Then, an application is created using the Application Builder so the surface topography prediction can be integrated in a laser machine, enabling the future user to predict the topography of one laser impact on its sample, using COMSOL Server™. The topography is further used in the machine to predict the surface functionality of the sample (wettability, friction coefficient etc.).

After numerical validations, the topography predictions are compared with preliminary experimental results and the order of magnitude is found to be satisfactory. However the measurements from experiments indicates a need to take into account the molten region in the model, which will be developed in further work.

This project has received funding from the European Union’s Horizon 2020 Framework Programme for research and innovation under grant agreement no 768701. 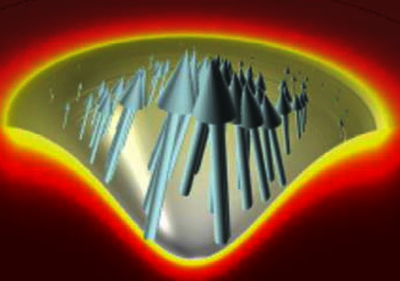