Core-shell type plasmonic nanoresonators have been optimized to maximize the fluorescence rate of coupled dipolar emitters, namely SiV color centers in diamond. The RF module of the COMSOL Multiphysics® software was applied to extract the optical response and to analyze the near-field and charge distribution. Conditional optimization has been performed by an in-house developed GLOBAL optimization algorithm. The criterion regarding deltaR radiative rate enhancement at the SiV excitation ensured that nanoresonators capable of enhancing excitation were evaluated, while the criterion regarding cQE corrected quantum efficiency at the SiV emission was modified in multiple steps. The optimization was performed by selecting either the product of the radiative rate enhancements at the excitation and emission nominated as Px factor, or the product of the Px*cQE as the objective function. Comparison of different coupled systems received via conditional optimization made it possible to uncover the advantages of different number of dipoles and types of nanoresonators, as well as of different optimization methods. To qualify the achievable fluorescence enhancements the Purcell factor, QE quantum efficiency and delteR radiative rate enhancement have been determined as function of wavelength. The quality factor of the optimized resonators was computed based on the extinction cross-section spectra extracted from plane wave illumination of nanoresonators of the specific geometry as well as based on the Purcell factor spectra.

Dependency of the two different FOMs on all geometrical parameters was inspected and compared for coupled systems optimized by applying the Px and PxcQE objective functions. In addition to this the PxcQE was inspected as a function of both composing quantities, while the Px was studied as a function of the cQE (Fig. 1). The achievable Px and PxcQE quantities were compared for different number of dipoles, different types of nanoresonators and for different methods of optimizations. The comparative study revealed that all geometrical parameters are larger in core-shell type nanoresonators optimized with the PxcQE objective function, since the larger dipole distance allows reaching larger cQE in larger nanoresonators.

The FWHM of the ECS and Purcell factor peaks are always larger, which implies that the quality factor is weaker in nanoresonators optimized to maximize for PxcQE. This indicates that the main advantages of the optimization performed by applying the Px (PxcQE) objective function manifest themselves in non-cooperative (cooperative) fluorescence enhancement. 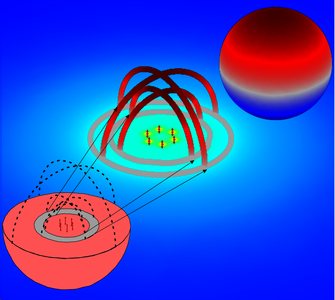