Modeling the Hyperloop with COMSOL®: on the Aerodynamics Design of the EPFLoop Capsule

The Hyperloop is a concept system targeting passenger transportation aiming to carry people in a pod running in a high vacuum tube at 1200 km/h. In 2015, SpaceX announced that they would sponsor a Hyperloop pod design competition, because of their interest in helping to accelerate the development of a functional Hyperloop prototype. The EPFLoop team (http://hyperloop.epfl.ch/) has been formed in September 2017 at EPFL with the intention of participating in the third round of this competition which took place in July 2018 and it groups PhD, master and bachelor students in a highly innovative environment that tackles the future of transportation. This year, over 5000 teams applied in October to participate in the competition and only 20 teams passed the final selection. The EPFLoop team is proud to be one of the teams in the final round.

Several challenging technical aspects are involved in this project. The reliability and flexibility of COMSOL Multiphysics® allows even those who are not experts in FEM to perform analysis at high level. Among several technical challenges, the aerodynamic design of the capsule aeroshell involved several iterations which led to an optimal solution for the EPFLoop pod. The internal pressure of the tube is 861 Pa (8/1000th of the atmospheric pressure) but the high speed for which the pod has been designed requires to consider compressible flow conditions (M>0.3). Thanks to Laminar Flow and High Mach Number Flow interfaces in COMSOL, 2D and 3D simulations were performed. To optimize computational time, preliminary 2D simulations have been carried out as a first attempt at shape optimization, using both the Optimization and LiveLink™ for MATLAB® modules, where a Genetic Algorithm developed by EPFLoop performed the optimization. Consequently, the 3D design has been studied, where the turbulent stationary conditions were simulated with the HMNF module. At M=0.4 the drag coefficient and the boundary layers were simulated, with three iterations of the design, which resulted in a fuse shape for the aeroshell. Eventually the pod was analyzed in the transonic flow region to evaluate where phenomena such as the Kantrowitz Limit can occur.

Then, the carbon fiber-epoxy composite aeroshell was designed. The aeroshell failure under load was studied using a stationary simulation and plies. A curvilinear coordinate interface has been used to define the properties on a complex geometry. Load conditions were the deceleration (2.6g) and the pressure maps obtained by the CFD simulations. The composite shell is locally reinforced with ribs. In an iterative process, additional plies were added to the places where the Tsai-Wu safety factor did not reach the required value of 2. Von Mises stress and deformation were found to be concentrated at the attachment points of the aeroshell to the chassis. The result is a light and strong aeroshell of about 8 kg, manufactured by the LPAC laboratory at EPFL, which will be exhibited at the COMSOL Conference Lausanne 2018. 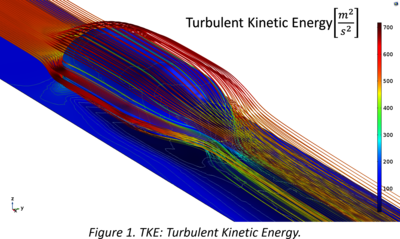