Transfer Impedance of a Perforate

Perforates are plates with a distribution of small perforations or holes. They are used in muffler systems, sound absorbing panels, and in many other places as liners, where it is important to control attenuation precisely. As the perforations become smaller and smaller, viscous and thermal losses become more important. The attenuation behavior, which is also frequency dependent, can be controlled by selecting the perforate size and distribution in a plate. The system is also sometimes referred to as micro-perforated plates or MPP.

While perforates have been theoretically studied for many years, analytical or semianalytical models can only be applied for simple geometries. A numerical approach is necessary for systems where the holes have various cross sections, if the perforations are tapered, or if the distribution of holes is uneven.

In this tutorial model, the effects are modeled in detail using the Thermoviscous Acoustics, Frequency Domain interface. While nonlinear loss mechanisms occur at high sound levels or in the presence of a flow (through or over the perforate), only the linear effects due to viscosity and thermal conduction are studied in this tutorial model. The transfer impedance, surface normal impedance, and attenuation coefficient of the system are determined. 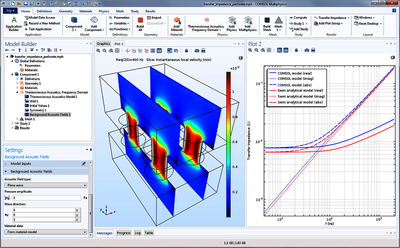