I present a practical model, to show basic properties and interactions and some additional phenomena und aspects in a stepwise approach to the realistic world of acoustic levitators.

In this levitator model the millimetre-sized spherical sample is located (in air environment) below the piezoelectric transducer (mechanical coupled resonator), which radiates the inaudible sound of 22 kHz downwards against the reflector. The transducer is based on a sophisticated 20 kHz model, designed by E.-G. Lierke. I used that version in 1991 at the Battelle Institute (Frankfurt/Main, Germany).

Results: The current available model contributes to understand the reality of acoustic levitation and helps to improve acoustic levitators for future applications. The model enables the user to study basic properties, like - the frequency-dependent power transfer on the way from the piezo electrodes into the levitation sound field, - the mechanical stress and deformation of the ultrasonic transducer, - the values for transducer amplitude, sound pressure level and acoustic radiation forces to levitate lightweight up to heavy samples, and - the force progression in case of a sample position change.

Furthermore, the model shows some additional phenomena, such as the resonance shift of single-axis acoustic levitation due to the presence of a rigid spherical sample. 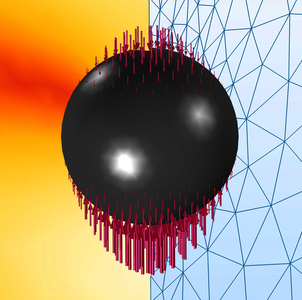