Kejako is developing a non-invasive solution for demanding presbyopia patients seeking to keep their quality of life through the compensation of visual accommodation decay. The company has already developed the first and proprietary 3D parametric model of the complete eye. The model combines multi-physics numerical modeling to compute the full eye’s normal optical and mechanical behavior, as well as resulting impacts due to a specific eye disease. The model was first built for research and development purposes as a powerful tool for understanding, experimentation, and the numerical proof of concept of potential solutions. Kejako is currently working on the numerical proof of concept of their proposed Phakorestoration™ solution.

A subset Kejako’s numerical proof of concept work, was focused on conducting an FEA (finite element analysis) to derive the shear modulus value of a porcine crystalline lens using data acquired from a centrifugal force test. COMSOL Multiphysics® was used to perform both a forward and inverse analysis to determine the shear modulus of the porcine lens. A 2D asymmetric model representing the lens was constructed in COMSOL Multiphysics® from geometrical data extracted from the centrifugal test. COMSOL’s Structural Mechanics module and Nonlinear Elastic Material module were used to define the physics and associated material properties of the lens as part of the development of the forward finite element analysis. Subsequently, COMSOL's Optimization module was used to perform the inverse finite element analysis, employing a geometrical comparison of a simulated lens geometry with that of deformed lens geometry to estimate the lens’ shear modulus which will minimize the difference between the two geometries. In addition, COMSOL’s Application Builder was used to design a Graphical User Interface (GUI) on top of the developed FEA model, which would allow non-simulation experts to use the Application to obtain the deduced shear modulus results of a test crystalline lens.

The results of this project, showed it was feasible to use COMSOL to create an FEA module which can be used to reverse engineer the shear modulus values acquired from a centrifugal force test data using the Nelder-Mead optimization algorithm provided by COMSOL’s optimization module. In addition, a custom GUI was created on top to the multi-simulation FEA study to enable non-simulation experts is run the application which was used to deduce the resulting shear modulus values of the crystalline lens.

Using COMSOL's Application Builder to create a customized GUI is relatively easy and straightforward. Even for those who are not programming geniuses; using the Application Builder’s graphical interface, allows even a novice to create a professional looking GUI. This tool is part of COMSOL's standard modules package and makes the potential for sharing simulation models much easier, especially with potential end users that have no experience in FEA modeling and simulation. Building a GUI on top of the simulation lets the simulation engineer decide and control what potential users can view and how they can use the simulation application. 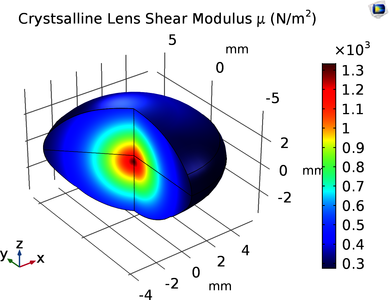