COMSOL Multiphysics® Software and PV: A Unified Platform for Numerical Simulation of Solar Cells and Modules

Introduction: Existing solar cell (photovoltaic, PV) device simulation software is either open source with limited capabilities (1D only) [1,2] or extremely expensive with obscure functionality [3]. PV researchers need an accessible and versatile simulation tool to optimize existing technologies and to reduce the time from concept to prototype for new technologies. This work demonstrates how COMSOL Multiphysics® software, with the latest version of the Semiconductor Module, can be customized to provide an evolutionary step in solar cell simulation. It unifies multiple physics modes (Figure 1), multiple dimensions/space scales (Figure 2) and multiple time scales.

The benefits over existing PV simulation software are that it facilitates higher dimensional modeling (2D, 3D, time), and can be coupled with other physics including optical, thermal, reaction-diffusion, etc. In addition, direct access to the terms in the partial differential equations makes it possible to test alternative physical models (e.g. quantum effects, plasmonics, etc.). The time-dependent solver features make it the first simulation tool that can predict both device performance and long-term reliability; our recent work has demonstrated both [4,5]. No existing software provides such broad functionality for PV device simulation.

Use of COMSOL Multiphysics: We will demonstrate the use of COMSOL software for PV applications by simulating a benchmark, thin-film PV technology known as cadmium telluride (CdTe). This initial demonstration of thin-film solar cell simulation employs the Semiconductor Module and the Wave Optics Module. The Semiconductor Module is the first that employs the numerical methods necessary for handling heterostructures in a robust way (essential for most PV devices). However, it is not set up for PV applications and a major goal of this work is customization to include: (i) mechanisms that are peculiar to thin-film semiconductors; (ii) interaction with light (via the optics module), (iii) proper accounting of defect occupations and charge states; and (iv) standard diagnostic outputs that are common in the PV industry; post-processing with LiveLink™ for MATLAB® can assist with the latter.

Results: Our results thus far are promising for CdTe thin-film solar cells. The standard diagnostics of current-voltage (JV) and quantum efficiency (QE) are shown in Figures 3 and 4, respectively. There it is shown that the COMSOL software results are in good agreement with a well-known 1D PV simulator [2]. We have also shown that user-defined physics can be used to simulate long-term performance degradation [4,5]. Future results will include additional PV metrics, other PV technologies, and larger space scales.

Conclusions: This work is a first step towards a simulation platform that could become ubiquitous in the PV industry. Broad adoption would be encouraged by establishing a customized module, possibly using the new Application Builder, and baseline models for several well-known PV technologies. 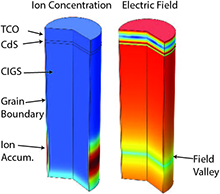