High power-density electronic devices had achieved levels of heat generation that have exceed the current heat removal capacities. Due to the increase in power density of modern electronic chips, there is a need of a higher heat flux removal capabilities, and single-phase fluid-flow wavy micro-channels offer an avenue to improve the thermal management. In this work, we present numerical simulations of the convective heat transfer on wavy micro-channels to investigate heat transfer enhancement in these systems by proposing a methodology based on local and global energy balances in the device instead of the commonly used Nusselt number.

The model consists of a square cross-section channel that is enclosed by a copper block; a single-wave baseline micro-channel model of size 0.5 mm by 0.5 mm by 20 mm length, with the fluid modeling as water flowing inside the channel, exposed to a heat influx of 47 W/cm² at the bottom. The governing equations for an incompressible laminar flow and conjugate heat transfer are first built, and then solved, for representative models by the finite element technique, under steady state conditions, with COMSOL Multiphysics®. This model uses Computational Fluid Dynamics and Heat Transfer Modules, along with LiveLink™ for MATLAB®. The specific physics interfaces used are Heat Transfer and Laminar Flow, both of which are coupled with the Multiphysics of Non-Isothermal Flow. The 3D wavy microchannel geometry is created using the geometry tools and functionality. The micro wavy-channel geometry is implemented with sinusoidal functions on the top and bottom surfaces, while the side-walls remain planar. For each geometry considered, we use 3D unstructured meshes with four-node tetrahedral elements for the fluid temperature, velocity and pressure, along with the temperatures within the solid. In the regions close to the walls we apply a mesh comprised of hexahedral elements enabling sharp representation of the fluid-solid interface. At the inlet of the channel- block system, a discontinuous Galerkin condition is used to accurately setup the thermal condition for the fluid and the solid domains, and sharply distinguish between them at the fluid-solid interface. In order to reduce computational time, symmetric conditions are prescribed at the mid-plane of the entire device.

The simulation was performed for five values of wave amplitude A= {0, 50, 100, 150, 200} µm, three values of Reynolds number, Re={50,100,150}, and a wavelength of 2 mm. In order to extract the data, we couple MATLAB® and COMSOL® via LiveLink™, which show that our numerical solutions are in good agreement with published data on single-wave channel. The results show that wave amplitude is not important, but the Reynolds number Re, plays a key role in the heat transfer enhancement of the device and in both the fluid and solid block temperature that are achieved. 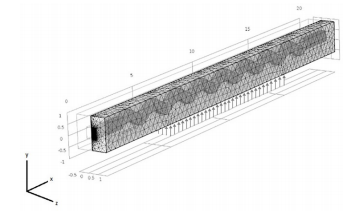