Optimization of YBCO based superconducting bolometer working above LN2 temperature

This study is focused on the optimization of a- YBa2Cu3O7-x (YBCO) based bolometer working above 77 K. The temperature distribution on the superconductor surface and the temperature profile through the whole system (bolometer plus plate with heaters) were studied at the working point (T = 85 K). Moreover, the response of the bolometer to pulses of different duration and intensity was analyzed finding a good agreement with theoretical predictions also for signals of ps length and few watts of power.

This work combines different functions of COMSOL Multiphysics® because of the different phenomena that we want to simulate: AC/DC (Joule effect and current in shells), thermal modules (in solids with radiation) and ODEs. Furthermore, due to the high complexity of the structure and the YBCO film shape, the importing tool of COMSOL is used to import the geometry directly from the CAD file. The whole detector was included in the “Heat transfer in solid” with particular attention to the superconducting film that was simulated with the thermal thin approximation. To reduce the time required for the simulation without losing accuracy in the thermalization of the YBCO layer, the “surface to surface radiation” was limited to the boundaries in which the radiation heating plays an important role for the equilibrium and for the transient with respect to the pure conduction. Regarding the AC/DC physics, a general electric current was used to simulate the action of the resistors acting as heaters, while the electrical current was controlled by a PID controller that was simulated with the ODE module. The single-layer current was used as the bias current in the YBCO film, whose behaviour was replicated by means of the resistance vs temperature curve obtained experimentally and then loaded and interpolated in the model.

The simulation allows obtaining the thermal profile of the sensor at the working temperature with excellent accuracy. The evolution of the output voltage well reproduces the expected curve and the decay time constant of the sensor. Ultimately, the original simulation is reproduced to analyze the effect of different materials for the screws, which are the thermal connection between the cold finger and the sensor, and how the parameters are affected from varying the size of the bolometer.

This study is instrumental for the simulation of low-temperature bolometers, in which thin film and thermal anchorage play a crucial role, and for more general analysis of micro devices in adiabatic environment for both steady-state and transient evolution. Further studies will be aimed at optimizing more complex and efficient sensors based on similar technology.

Acknowledgements This work is done in the framework of the INFN-CNS5 TERA Call. 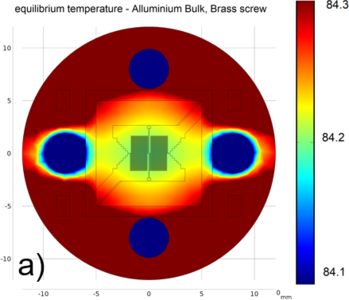