Ball bearings are used in vast majority of mechanisms for space applications (such as Solar Array Drive Mechanisms, pointing mechanisms or reaction wheels) in order to provide low friction and smooth motion between parts. These applications differ from the ground ones due to space environmental factors including high transient acceleration regimes during the launch phase, very low ambient pressure or vacuum during operation and poor heat transfer capability, resulting in more restrictive design requirements and constraints.

Space mechanisms are normally actuated via electric motors, which suffer from self-heating due to joule losses in the coils. This may lead to an important thermal gradient throughout the bearings assemblies where weak heat transfer is guaranteed due to the absence of convection and limited contact area. As for the actuator, the overheat will induce a thermal expansion, which can either cause gapping or increase the contact pressure between the balls and the race. In the first case, a further overheat can occur, as the thermal resistance is further increased, while the latter case may cause overloading of the bearings with wear and ultimately seizing of the bearing itself.

Considering a cooling system for a ball bearing is not a viable solution, instead increasing the thermal conductivity of the whole system, in order to more efficiently evacuate the heat losses of the motor, seems to be a better alternative. Therefore, the aim of this investigation is to study the thermo-elastic behaviour of a ball bearing set included in a motor, under the joule heating produced by the motor winding mounted in the neighbourhood.

Acknowledging the different physics involved in this study, COMSOL Multiphysics is considered as the most appropriate tool for modelling and simulation. The study includes the analysis of the system thermo-elastic behaviour with different configuration of materials offering different thermal conductance characteristic, and particularly stainless steel 440C (classic heritage material for ball bearings in space), as a reference, and series of different AlSi alloys and aluminium MMC-s offering better conductivity capabilities. The Solid Mechanics model is composed of different isotropic solid bodies (such as Motor housing, upper race, ball, bottom race and shaft) in contact, as illustrated in Figure 1. The joule heating is accounted, in the Heat Transfer in Solids module, as the heat flux entering from the motor housing. The latter cut across the bodies and leaves via the shaft end. Finally, the Thermal Expansion multiphysics coupling is used to model the thermal strain. Ultimately, the selected materials should permit a significant improvement of the thermos-elastic performance of the ball bearings. 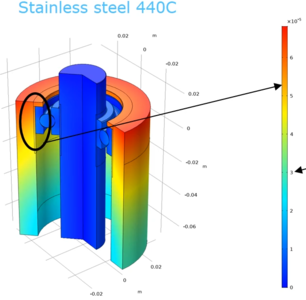