The most general method for calculating acoustics with thermoviscous effects involves solving the Full Linearized Navier-Stokes (FLNS) equation set, where the velocity vector field, the scalar pressure field and the scalar temperature (variation) field are coupled. The equation set in its general form does not easily lend itself to topology optimization, and no attempts at this are found in the available literature. There are, however, approximate methods which are accurate for typical applications and frequency ranges, such as acoustics for hearing aid audio. One method [1] in particular was found useful, since it involves solving a set of Helmholtz equations, for which both the velocity field and the thermal field have been decoupled from the acoustic pressure: The velocity and the temperature are both described via the equation

where kϕ is a wavenumber, and Ψϕ is a variable related to either temperature (ϕ=h) or velocity (ϕ=v). Both the temperature and the velocity field are combined wave and diffusion processes, and this nature is described via the complex and frequency-dependent wavenumber. The build-in damping nature of the problem could help also stabilize the optimization process. For straight tubes, the Ψ_ϕ-field is fairly simple, and so it should be possible to set up an optimization routine for such geometries. The averaged (over the cross-section of the tube) fields can be directly linked to transmission line parameters, which in turn completely describe the acoustic behavior.

Isentropic (i.e. standard) acoustic topology optimization involves finding an optimum, and preferably binary, distribution of air and “solid-like” material, where a design (parameter) determines the density and bulk modulus of the material, within given constraints. The sound field is typically quite complex, and finding an optimum solution can be a challenge.

With the proposed thermoviscous model a topology optimization scheme is set up for straight tubes, where an interpolation between air and “solid” is obtained, using interpolations of both the source term in (Eq.1) as well as the absorption coefficient. An example is shown in the attached figure, where a circular cross-section is optimized to have the highest “loss-to-acoustic mass” ratio possible within given constraints. Filtering has yet to be applied to the optimization routine, so mesh sensitivity is seen. 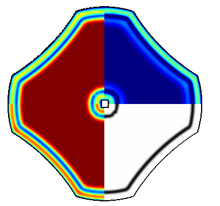