Evonetix is a Cambridge-based start-up company working on a revolutionary new technology to synthesize high-fidelity DNA at scale. Our technology is based on a silicon MEMS chip with a large number of reaction sites that facilitate multiple parallel synthesis channels. We operate a modified phosphoramidite cycle on these sites and combine with a proprietary error-detection scheme to enhance yield.

Our silicon MEMS chip consists of an array of heaters that operate in a common fluidic environment to create distinct and independent thermal wells – fluid volumes centered around the heaters whose temperature can be controlled precisely. Despite not being separated by physical barriers, the wells can be addressed and tuned independently, even under conditions of flowing liquid. Chemical reactions can be reversibly enabled/disabled on each site using temperature control.

Each reaction site (see figure) consists of an electrical heater on a SiO2 membrane supported by SiO2 pillars. The heater is passivated by a dielectric layer and capped with gold to host the chemistry. There are approximately 10 heaters per mm2, electrical connections to which are made using through-silicon-vias. Fluid flows over the heaters and is used to transport chemical reagents. We simulated the system in COMSOL Multiphysics® using the Heat Transfer and Chemical Reaction Engineering modules in conjunction with fluid flow multiphysics coupling. The simulations involved setting up the geometry as described above with realistic material parameters and inducing the heating/cooling using a combination of Joule heating and thermoelectric cooling. We compared situations with and without liquid flowing over the chip, with particular focus on the velocity limit beyond which the shape of the thermal well distorted. We also considered the influence of geometry, diffusion, and flow on the efficacy of chemical reactions.

We found that by carefully tuning the heater design and using a heat spreader, the temperature at the bottom of the well could be made spatially uniform to significantly better than 1% accuracy. Furthermore, we thermally isolated the individual membranes by patterning the bottom membrane surface into regions of high and low thermal conductivity, thereby directing heat leakage paths away from neighboring sites.

Based on our simulations, we manufactured prototype MEMS chips whose performance compared very favorably to predictions. The experimental tests included fluorescent microscopy to measure the volumetric and surface temperature profiles within a thermal well. For the former we used rhodamine B, a dye with temperature-sensitive fluorescence, suspended in the fluid and confocal microscopy to map the temperature within the well. For the latter we used the dye Cy5 covalently tethered to the chip surface, enabling the thermal environment at the surface to be probed. Using electrical measurements we characterized the reaction sites by their ‘thermal resistance’, i.e., the temperature rise per unit increase in power, and the predicted and observed values for this agreed to within 15%.

Our simulations have provided an excellent grounding for the MEMS design, and we have found COMSOL Multiphysics® to be invaluable towards springboarding into the next stage of development, namely performing DNA chemistry at the single site level. 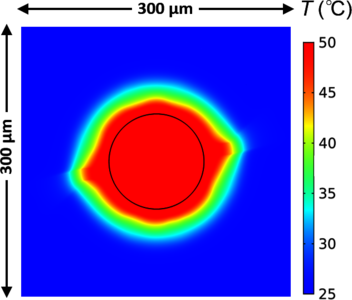