As covered in the first part of this course, the COMSOL Desktop® is the integrated user environment for creating and managing simulations in the COMSOL Multiphysics® software. It includes the Model Builder, Application Builder, and Model Manager workspaces. There are many parts to each workspace, and in this part of the course, we will show you some examples to personalize the COMSOL Desktop®.

Customizing the Layout of the COMSOL Desktop®

The COMSOL Multiphysics® user interface contains a number of windows, each with its own purpose. The following windows are always present:

Of these windows, only the Messages window can be closed. There are also a number of other windows that you can open from the Window menu.

An at-a-glance overview of the different ways you can customize the COMSOL Desktop® as well as restore it back to the default layout.

If you want to increase the size of the Graphics window for displaying a results plot, for example, you can maximize it by double-clicking at the top of the window. The window then becomes maximized and all other windows are hidden. Double-click again and the user interface is restored to the previous layout, before the window was maximized. You can maximize any window in the user interface this way.

To resize a window, click and drag the edges of the window to increase or decrease its width or height. You can also make a window “float”, or detach it, in three ways. One option is to drag the window outside of the desktop, or you can right-click the window and choose Float. Or, choose Float from the Window position menu at the upper-right corner of the window (the small downward-pointing arrow). This detaches the window, which “floats” as a separate window on the screen. You can move and resize a floating window as desired.

The Window position button and menu.

A screenshot of the Model Builder, with the model tree on the left, 3D Plot Group settings in the center, and Graphics window with a surface transistor model open and the positioning guide shown as an overlay.
The positioning guide for docking a window to the COMSOL Desktop. 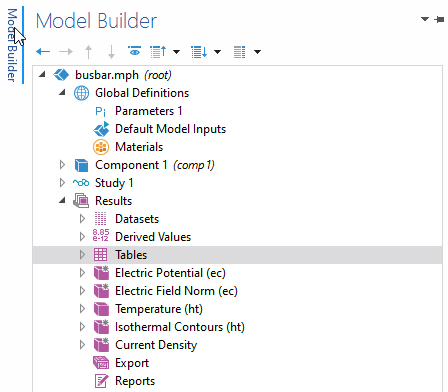 The cursor hovering over the Model Builder tab in the tray, yielding a preview of the currently hidden window.

Some of the most important windows, listed at the start of this article, are not closable. To close any of the other windows, click the Close button (the cross). To open a closed window again, choose it from the Windows menu.

You can use the flexibility of the user interface to tile several plot windows so that you can view them simultaneously. Doing this allows you to show multiple different results plots for a model's solution. We will use the surface resistor tutorial model below as an example.

To visualize multiple plots at once in the Graphics window, complete the following steps:

The Window Settings section, wherein the settings have been updated so that the stress results are displayed in a seperate plot window named Stress Distribution.

To tile the plots, proceed as follows: 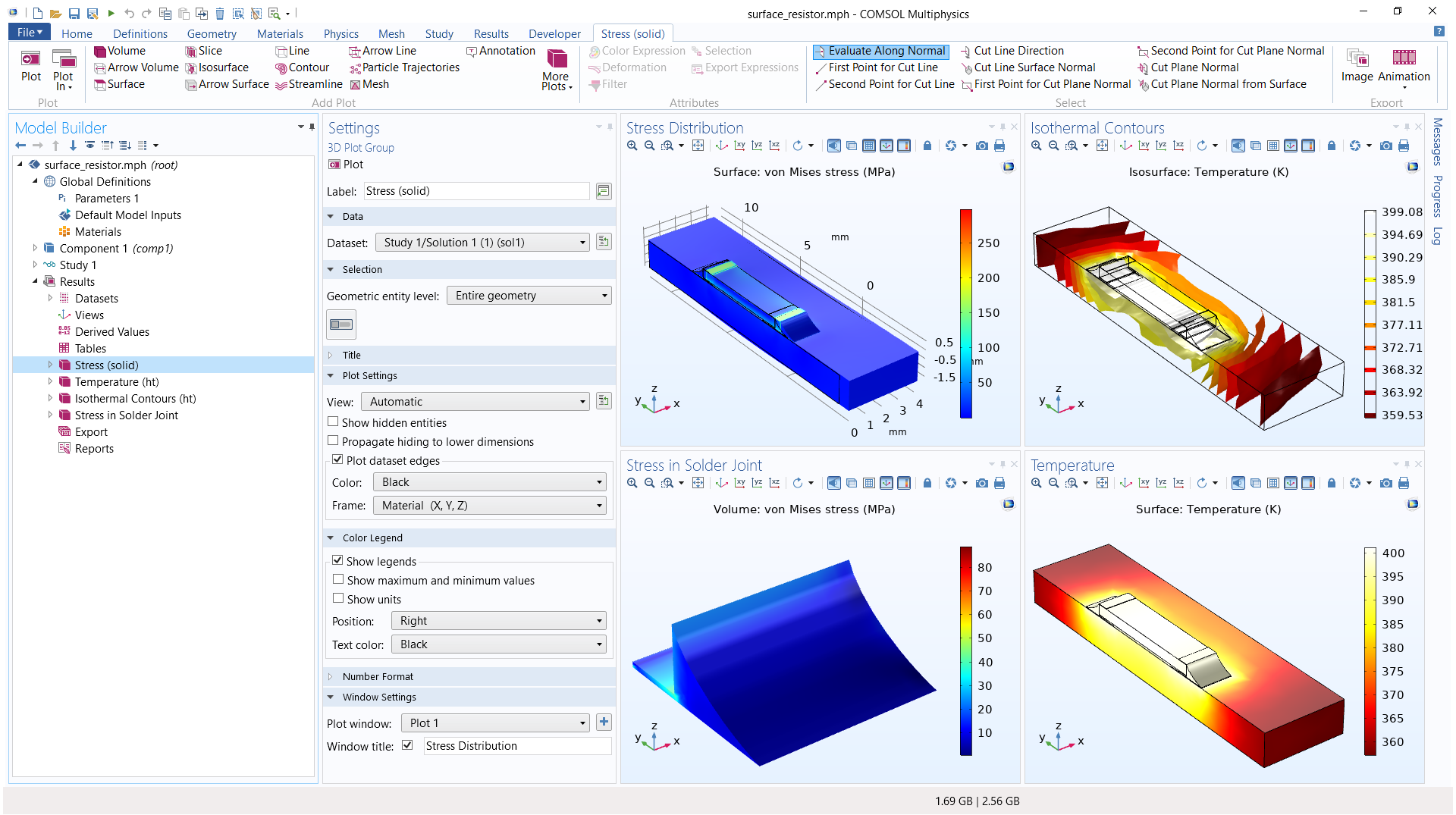 Show Option for the Messages Window

The Show on New Message option in the Messages window.

Restoring the COMSOL Desktop® to a Built-In Layout

After adding and rearranging a number of windows, you might want to return to the default layout. To do so, click the Reset Desktop button. This will close any added windows and restore the size and position of the windows discussed previously.

There are two built-in layouts to choose from:

One of these layouts is always selected, and it’s the selected layout that the Reset Desktop button restores. 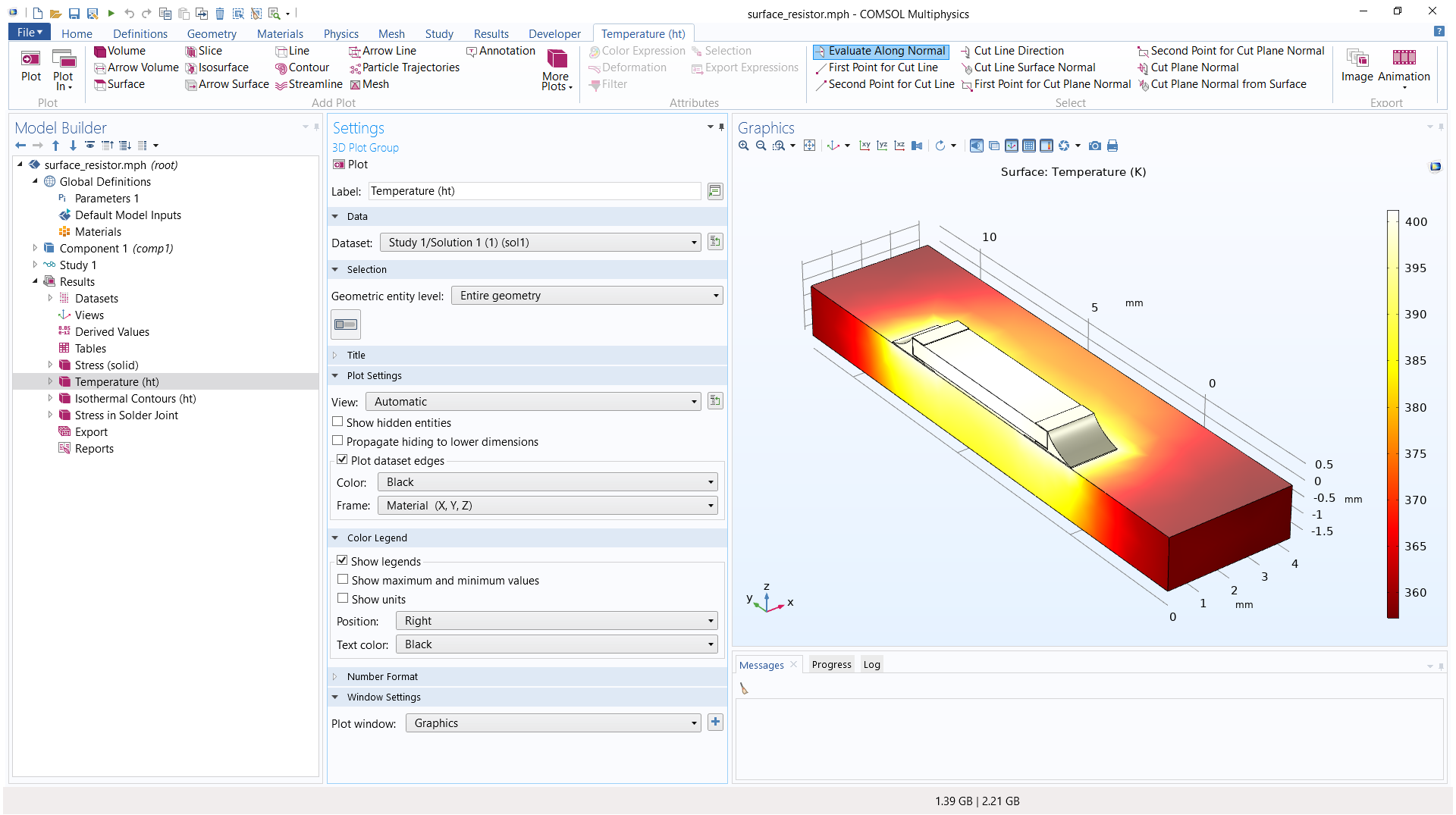 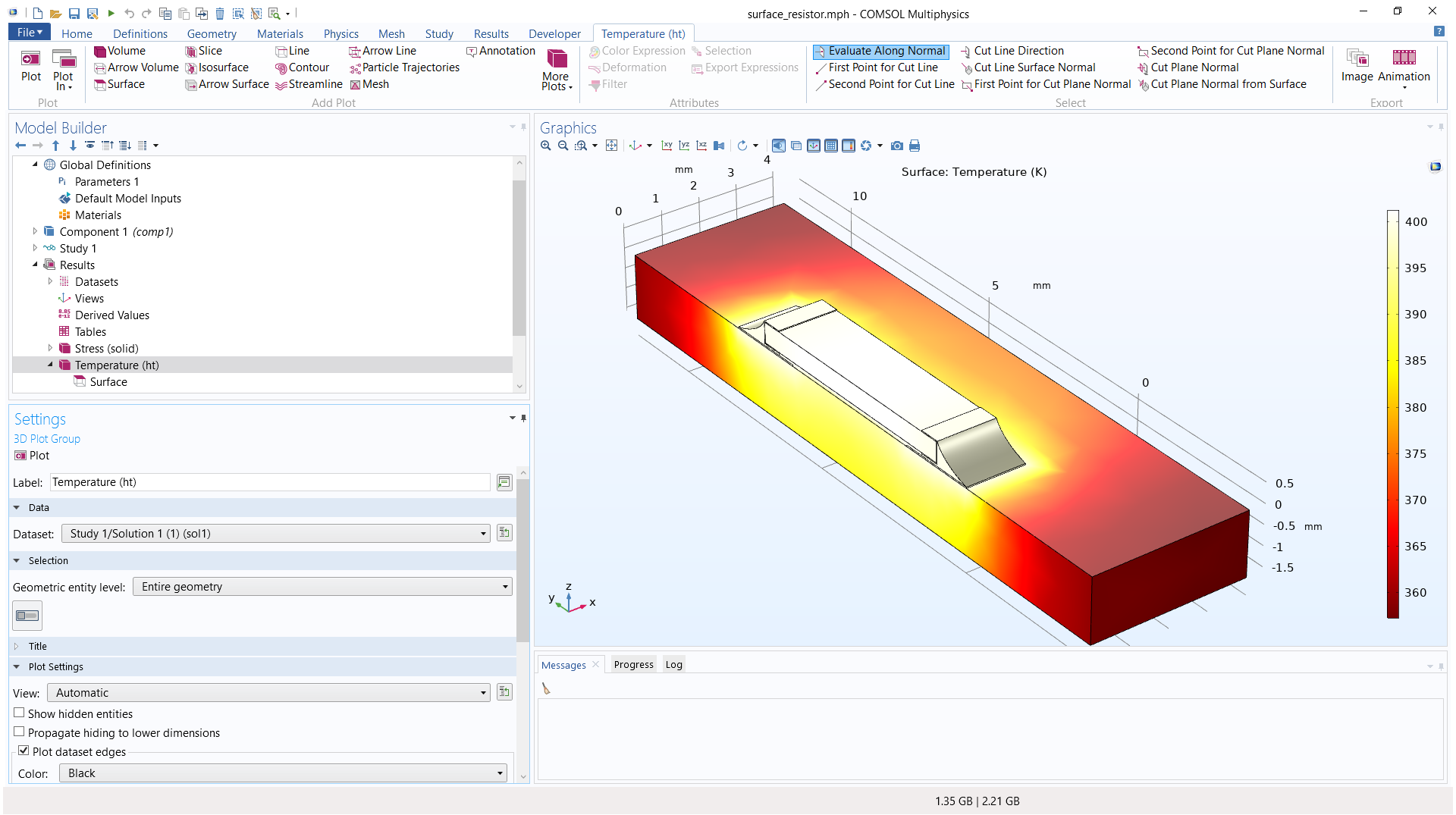 The widescreen layout (left) and regular layout (right) for a reset desktop.

The desktop appears in your modified layout until you select the Reset Desktop button. You can use this ability to keep two custom layouts with a Widescreen Layout for one purpose and a Regular Screen Layout for another purpose. For example, if your desktop computer setup includes dual monitors, you can configure the Regular Screen Layout so that the COMSOL Desktop® appears in one monitor with the Model Builder and Settings windows (and perhaps other windows of interest). You can then have a floating and maximized Graphics window fill the second window. Such a configuration can be useful for postprocessing and visualization of results. The Widescreen Layout could then keep its basic integrated environment and perhaps be used for preprocessing and setting up the geometry and physics. You can then quickly switch between the custom layouts by choosing Widescreen Layout or Regular Screen Layout.

Customizing the COMSOL Desktop® for the Linux® Operating System and macOS

Location of the Minimize and Maximize buttons in the COMSOL Desktop® for macOS and Linux® operating systems.