When to Use the Manual Approach with Predefined Couplings

Each physics phenomena described in a multiphysics model may contain complex operating conditions, material properties, initial conditions, and boundary conditions. These have to be defined in the physics settings for each physics interface included in the model.

In order to control each step of the modeling process, it may be good to introduce one physics phenomenon at a time and check the results for every added phenomenon. This sequential bootstrapping strategy gives you a better chance to catch any errors in your formulation of the problem and in entering the settings in the COMSOL Multiphysics® user interface (UI). In addition, solving the full multiphysics model equations every time you want to check if a formulation or input for one of the physics interfaces is correct may be very time consuming and computationally expensive. Using this approach enables you to examine and validate both the implementation of and results for each physics.

A model of a busbar, showing the electric potential in a multislice plot in rainbow.

A model of a busbar showing heat transfer and electromagnetic heating its surface in a red–white color gradient.
Results for the standalone analyses building up to the full multiphysics model of a busbar, using the manual approach with predefined couplings. In an initial study, only the Electric Currents interface is included in the model, and the results for the electric potential are computed (left). In a follow-up study, the Heat Transfer in Solids interface and Electromagnetic Heating multiphysics coupling are added and computed with the results for the temperature distribution displayed (right).

Procedure to Implement the Approach

The purpose of the sequential modeling strategy is to compartmentalize the model-building process to make it easier. As such, a general outline of the procedure for using the sequential approach is as follows:

In another article discussing the fully automatic approach for defining multiphysics models, a noteworthy benefit discussed is that the optimal study and solver settings for the combination of physics interfaces in your model are automatically handled. The Add Multiphysics window gives you the same benefit as when you add physics interfaces manually one-by-one. When a multiphysics coupling is added to your model component through these means, the software automatically adjusts the settings for each participating physics interface. This enables you to still take advantage of the functionality even if you are not using the fully automatic approach.

Below, we demonstrate use of the approach with a tutorial model serving as our multiphysics example.

To demonstrate using the approach, we can revisit the thermal-electrical-mechanical ("tem") version of the thermal microactuator tutorial model, which is found in the Application Library under the Multiphysics section of the COMSOL Multiphysics folder. It is assumed that all details regarding the model setup, except for the physics settings, have been completed, and we will specifically focus on defining the multiphysics couplings in the model.

Since we are employing a sequential strategy, we first need to determine the order of the separate analyses. In a microactuator, an electric potential is applied over the anchors of the two hot arms. As current flows through the hot arms, resistive heating heats them up, causing thermal expansion. The cold arm does not expand to the same extent and this results in the deformation, in the negative y direction, of the actuator.

This means that the process starts with the electric potential, continues with the induced current causing a temperature increase, which in turn causes the structural deformation. The natural order of the physics phenomena occurring dictate the order of the analyses:

It should be noted, however, that in general, when using this approach, we can add and define the physics interfaces in any order. In this case, only one specific order makes sense, since computing the thermal model without a current would just give a uniform temperature field. Without a varying temperature field, the actuator does not move and it is meaningless to perform the structural analysis. Let's now dive into implementing the sequential approach with the plan above.

For the electrical analysis, we start by adding the Electric Currents interface to the model component and define the physics settings by adding the boundary conditions. Then, using the stationary study previously added, we compute and obtain the results for the electric potential of the microactuator. 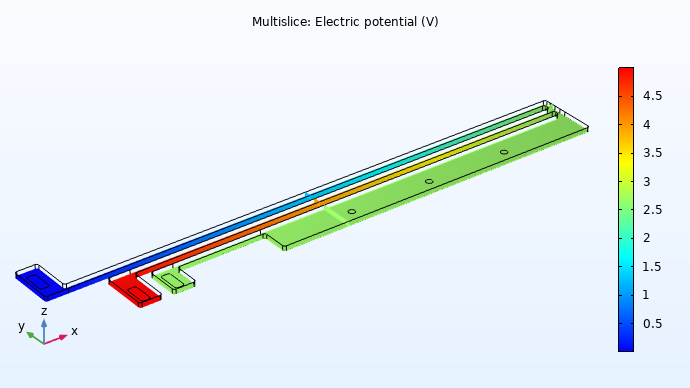 Electric potential results plot for the electrical analysis of the microactuator.

After computing the study for this first single-physics model, we want to verify that the results are accurate. If they are, we can proceed with performing our second study, the electrical-thermal analysis. If they are not, we would then take this time to trace and correct any faults in our model. As seen above, the results show an electric potential range of 0–5 volts throughout the device, with the highest current observed at the middle hot arm's anchor and the lowest at the long hot arm's anchor. These results are consistent with how we defined the physics and are what we would expect, since an electric potential of 5 volts was applied to the middle hot arm's anchor and was ground at the long hot arm's anchor, while all other surfaces were electrically insulated.

Having confirmed our results for the electrical analysis of the microactuator, we can move forward and repeat this process for the electrical-thermal analysis of the device. To keep the results organized, it would be best to use multiple studies. We add a new stationary study to the model component, using the study to solve for both the electric and heat transfer interface equations. To do this, we add the Heat Transfer in Solids interface to the model component. Once again, we add the physics nodes needed to define the heat transfer in the microactuator. Thereafter, we need to implement a multiphysics coupling to couple the physics interfaces. To do this, we can open the Add Multiphysics window, choose both physics interfaces to be coupled, choose only the second study under the Solve column, select the Joule Heating, and then add it to the component. 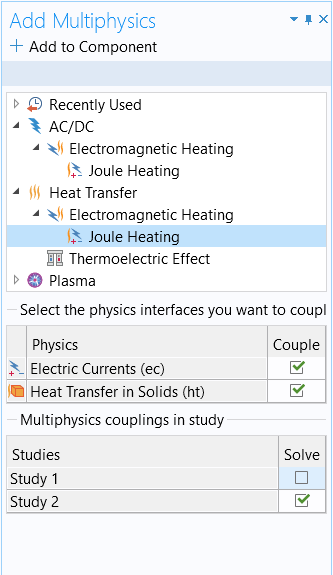 The Add Multiphysics window with the selections for the electrical-thermal analysis, as specified above.

Now, we can compute the second study in our model component. Upon solving, we are provided with both temperature and isothermal contour plots showing the temperature distribution in the microactuator. 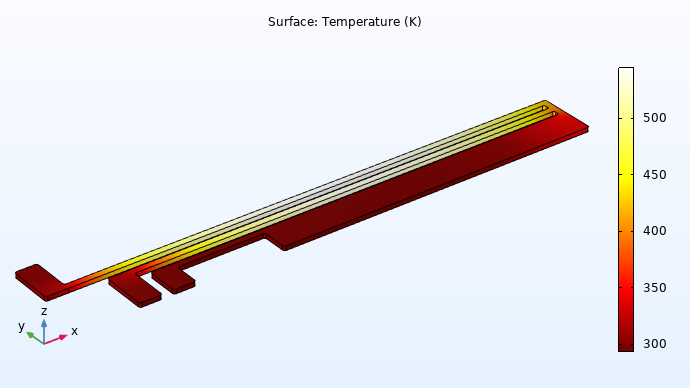 Temperature plot for the electrical-thermal analysis of the microactuator.

Once again, we examine the results. If they are accurate and the model is behaving as we expect it to be, we can proceed. Here, the maximum temperature is observed between the two hot arms. As we move toward the anchors of the hot arms or the cold arm, there is minimal — if any — temperature rise. These results are appropriate, as the electric potential was applied between the two hot arms, wherein heat is generated through resistive losses. The actuator also experiences convective cooling over all boundaries through a thin air layer, which reduces the temperature closer to ambient temperature. 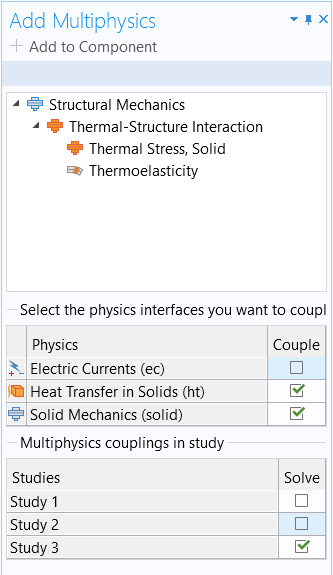 The Add Multiphysics window with the selections for the full multiphysics analysis, as specified above.

Now, we can select the Study 3 node, computing it to solve the model equations. When it has finished solving, three new results plots are generated that display the electrical, thermal, and structural results of the microactuator. Selecting the newly generated stress plot reveals that thermally induced stresses and strains develop between the two hot arms, causing them to expand and bend the actuator. 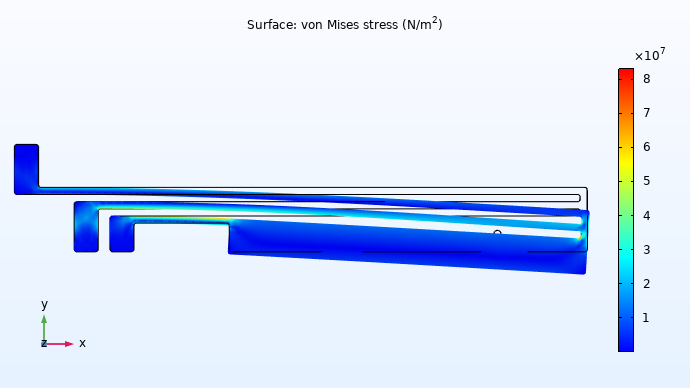 Von Mises stress distribution results for the multiphysics analysis of the thermal microactuator. The black geometry outline shows the original configuration of the actuator geometry, indicating the degree to which it deforms due to thermal expansion. Note that a deformation scale factor of approximately 6.6 is used.

To see the step-by-step process in detail for using this approach, you can watch the video below for a full demonstration.

Demonstrate the knowledge you have gained from this article by putting it into practice with the follow-up modeling exercises listed below. The directions provided for each modeling exercise contain all the information necessary in order to complete it, but are intentionally generalized to encourage self-guided problem-solving. You can check your implementation with the solution model files provided by comparing them manually or using the Comparison tool to exactly identify the differences.