Manually Setting the Scaling of Variables

The default behavior of the COMSOL® software is to assume a different scaling for each set of variables in your model. These scale factors are automatically determined by default, but sometimes need to be manually tuned. In this article, we discuss the importance of scaling for a model and how to manually set the scaling of dependent variables. 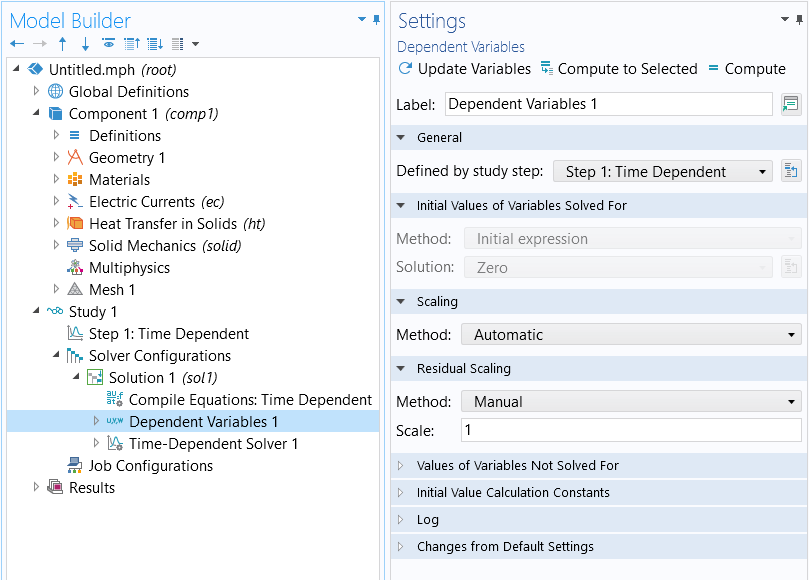 Significance of Scaling of Variables

Scaling is often necessary for numerical purposes. When solving for several different fields, some fields may have an average magnitude quite different from the others, and solving for both at once may lead to numerical issues. Scaling is used to avoid this.

As an example, consider a transient problem involving electric currents, heat transfer, and solid mechanics physics. The default initial value for the Heat Transfer in Solids physics interface is 293.15 K, and the software will automatically use this as the scale. The default initial values for the Electric Currents and Solid Mechanics physics interfaces set the electric potential and displacement fields to zero, respectively.

A screenshot of the Initial Values node Settings window when modeling electrical physics in COMSOL Multiphysics.

The Settings window for the Initial Values node, with the Domain Selection and Initial Values sections expanded and set for a structural modeling problem.

The Settings window for the Initial Values node, with the Domain Selection and Initial Values sections expanded and set for a structural modeling problem.

When the initial values are zero, the software will automatically use information from the physics interfaces to estimate a scaling. In the case of the Solid Mechanics interface, for example, a scaling of 0.01 times the bounding box size of the geometry is used. Other physics interfaces will have different defaults. The scaling is shown at the beginning of the Log window, as in the screenshot below.

Solver log window showing the default scales that are automatically determined by the software.

Sometimes, these automatically determined scale factors are not reasonable, and you will need to manually set them.

For example, you may know that the actual electric potential can get up to 10 kV and the temperatures up to 500 K, but the displacements are expected to be quite small, on the order of 0.01 mm.

To manually set scales, first generate the default solver sequence, if it does not already exist. Right-click the Study node and select Show Default Solver. This will populate the Study > Solver Configurations node with the default solver settings. Go to the Dependent Variables node and expand it. You will see separate nodes for each field being solved for within the model.

Select each node and, in the Settings window for that node, switch the Scaling Method to Manual and enter the expected peak magnitude of that field over the whole simulation timespan, as shown in the screenshot below. 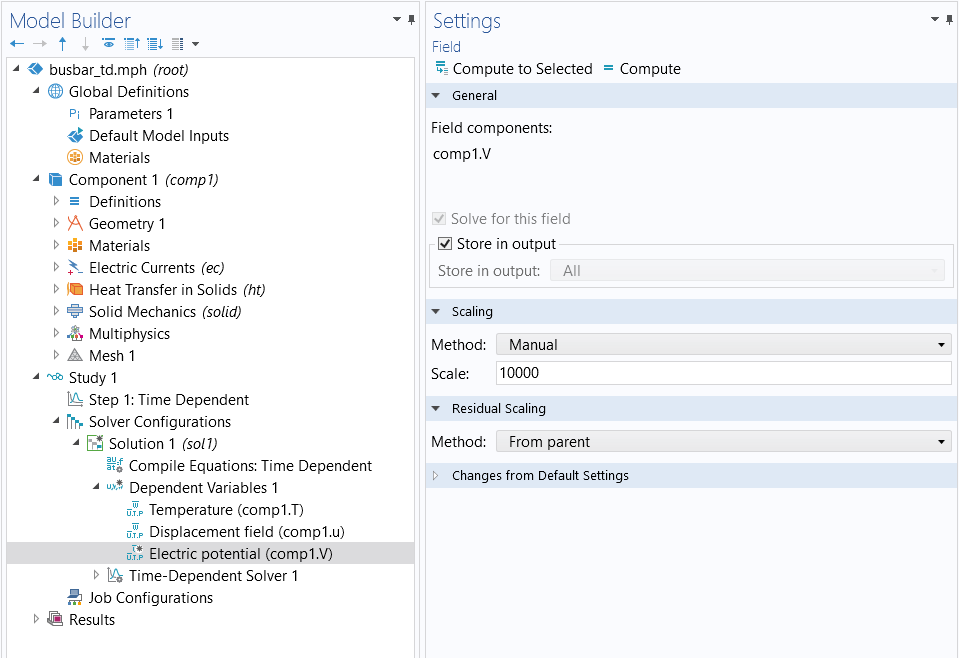 Manual scaling of the electric potential, assuming a peak voltage of 10 kV during the simulation. 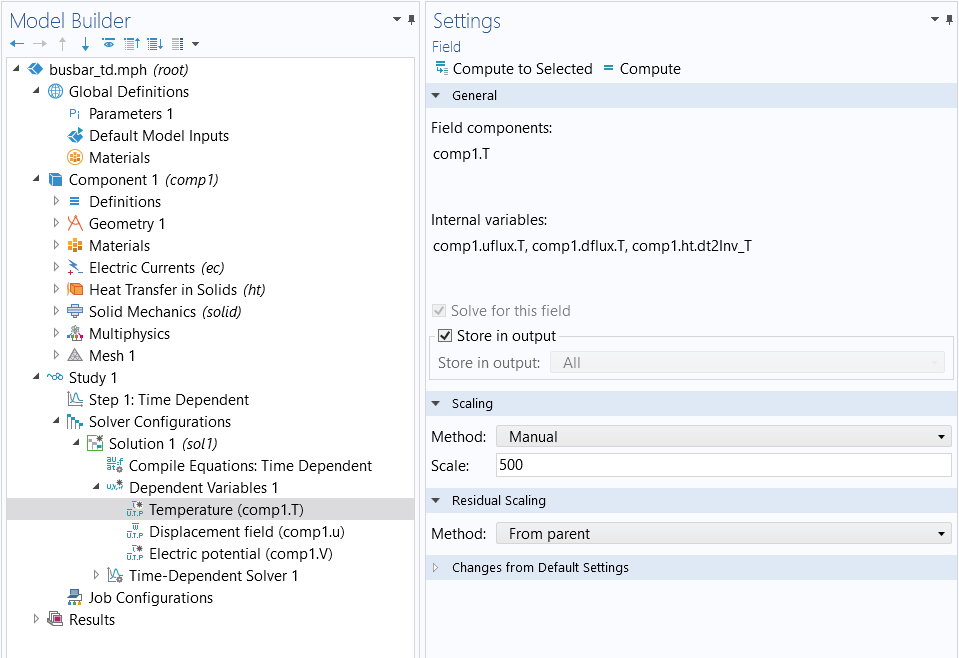 Manual scaling of the temperature, assuming a peak temperature of 500 K during the simulation. 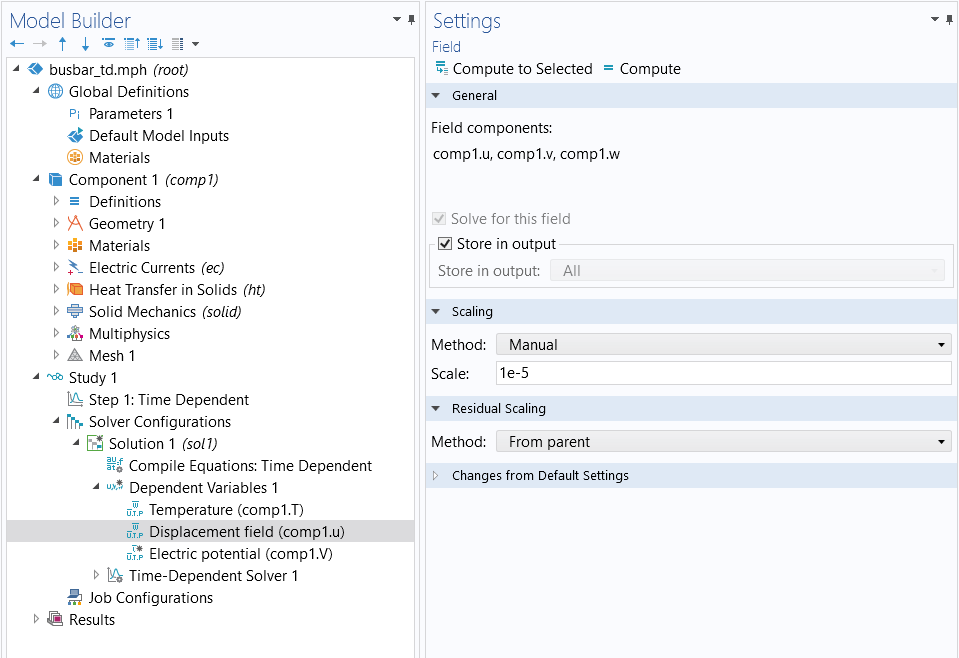 Manual scaling of the displacement, assuming it to be quite small, on the order of 0.01 mm.

After completing the simulation, check the actual computed peak absolute values of all of the fields and compare them to these scale factors. If they differ by significantly more than an order of magnitude, recompute the results with new scales and compare results.

For more information on the scaling of variables, you can check out the Scaling of Variables and Equations and Dependent Variables sections in the COMSOL Multiphysics Reference Manual.