This example studies a narrow vertical cylinder placed on top of a reservoir filled with water. Because of wall adhesion and surface tension at the air/water interface, water rises through the channel.

Surface tension and wall adhesive forces are often used to transport fluid through microchannels in MEMS devices or to measure, transport and position small amounts of fluid using micropipettes. Multiphase flow through a porous medium and droplets on solid walls are other examples where wall adhesion and surface tension strongly influence the dynamics of the flow.

To model the adhesive forces at the walls correctly, the treatment of the boundary conditions is important. If you fix the velocity to zero on the walls, the interface cannot move along the walls. Instead, you need to allow a non-zero slip velocity and to add a frictional force at the wall. With such a boundary condition, it is possible to explicitly set the contact angle, that is, the angle between the fluid interface and the wall.

The model calculates the pressure field, the velocity field, and the water surface’s shape and position. It uses a level set method, or a phase field method, to track the air/water interface and shows how to add friction and specify the contact angle at the channel walls. The capillary forces dominate over gravity throughout the simulation so that the interface moves upwards during the entire simulation. 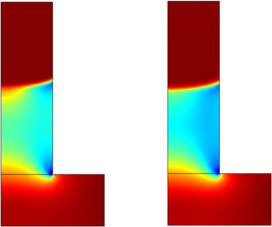