Exciting plasma in inductive mode is attractive due to the high electron density and the absence of ion interaction with the reactor walls. However, any real system excites plasma at low power in capacitive mode with strong interaction with the walls. The transition from one mode to the other, the effect of the strong but variable magnetic field on the current path are still under investigation. The conductivity becomes anisotropic and time dependent due to the Lorentz forces. The consequence is a nonlinear transport and the appearance of harmonics in the inductive excitation. A standard analysis in frequency domain at the excitation frequency is therefore not possible. The present investigation makes use of the time domain RF simulations within COMSOL. We use a simple 2D representation of the plasma reactor, assuming homogeneity in z axis. The program calculates in a time slice dt the evolution of the electric and magnetic fields and of the current density, respectively, using constant conductivity. The calculation of the next slice dt uses initial values taken from the end of the previous stage and an anisotropic conductivity defined by the microwave magnetic field. The procedure is automatized using the COMSOL routines in Matlab for many periods of the microwave oscillation. Although small, the simulation confirms the nonlinear effect of the magnetic field and reveals new details about the inductive excitation at low absorbed power, i.e. at low electron density. The experimental system is presented in Fig. 1 and consists of a copper block having a hole for the plasma quartz tube and a slid. The hole is a one turn inductivity and the slid the capacitor, together forming a parallel resonator. Details are presented in [1]. Spectral analysis of the near-field reveals harmonics for the inductive excitation, while for the capacitive one they are not detectable, Fig. 2. Two relevant current paths in the transition mode are presented in Fig. 3. Within a period, there are fluctuations between the two modes. Fig. 4 shows the linear response of the system at low electron density and the distorted behavior at high electron density. Similar effects have been found in experiments at 3 and 6 MHz [2] and theoretically analyzed in [3,4]. 1. H.-E. Porteanu, I. Stefanović, N. Bibinov, M. Klute, P. Awakowicz, R. P. Brinkmann, and W. Heinrich, Plasma Sources Sci. Technol. 28, 035013 (2019). 2. V. A. Godyak et al., “Observation of Second Harmonic Currents in Inductively Coupled Plasmas“, Phys. Rev. Lett. 83, 1610 (1999). 3. A. Smolyakov et al., “On nonlinear effects in inductively coupled plasmas“, Physics of Plasmas, 7, 4755 (2000). 4. J. D. Evans and F. F. Chen, “Nonlocal Power Deposition in Inductively Coupled Plasmas“, Phys. Rev. Lett. 86, 5502 (2001). 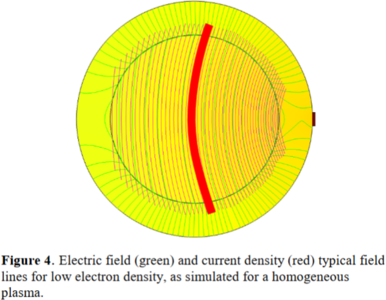