In COMSOL Multiphysics®, when defining the physics settings for a multiphysics model, you can completely streamline the process by utilizing the predefined multiphysics interfaces. This yields an almost fully automatic approach, whereas the manual approach with predefined couplings and manual approach with user-defined couplings require manual tuning to implement. We will explain what this automatic approach is, detail the advantages of using it, and go over how to employ this functionality in a multiphysics model.

When to Use the Automatic Approach

The multiphysics interfaces formulate mathematical models as coupled systems of partial differential equations, which describe the coupled physics phenomena. In addition, the multiphysics interfaces also determine how this system of equations is discretized to form the corresponding numerical model equations, for example, using a finite element method, and how these equations are solved. This means that the multiphysics interfaces automatically include the optimal element discretization settings and solver settings for the specific system of equations. In this way, the automatic approach enables you to more quickly get to and focus on defining the multiphysics model, without having to get bogged down with formulating the mathematical couplings or with the numerical technicalities that may be involved if you have to do the work from scratch.

Now that we have discussed the advantages of this approach, we will outline the steps and show the use of it with an example in subsequent sections.

Procedure to Implement the Approach

Below, we demonstrate use of the approach with a tutorial model serving as our multiphysics example.

Let’s use the thermal-electrical-mechanical (“tem”) version of the thermal microactuator tutorial model found in the Application Libraries to demonstrate the automatic approach for adding the physics interfaces for a multiphysics model.

Note: For the sake of brevity, assume that all steps in the modeling workflow, apart from defining the physics settings, are complete. Thus, the geometry, materials, mesh, and study are already set up. Additionally, we will narrow our focus to defining the multiphysics aspects of the model and not go into detail regarding how to add and define specific boundary conditions for the constituent physics interfaces.

First, we define the physics settings for Joule heating and thermal expansion. A voltage is applied between the two anchors connected to the hot arms, as pictured in the figure below. The conducted current is resisted as it flows through the actuator's hot arms, resulting in electric heating, which raises the temperature of the hot arms and causes them to expand through thermal expansion. The cold arm does not expand to the same extent and this causes the actuator to move in the negative y-direction in the figure. The base of all of the anchors are fixed, but the dimples enable the arms to move in the xy-plane. 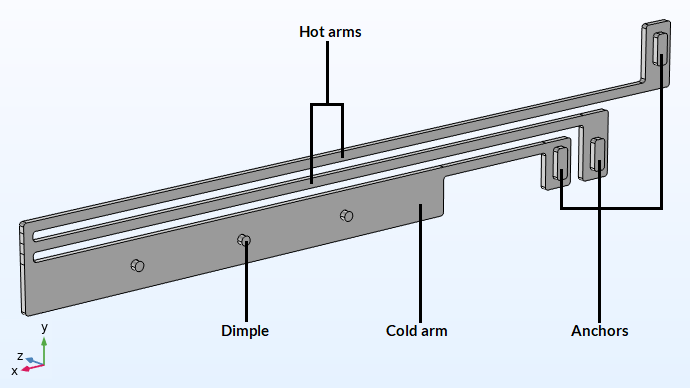 The thermal microactuator geometry with the parts labeled. The device is made of polycrystalline silicon.

To study the electrical-thermal-structural interaction that occurs, we can use the predefined Joule Heating and Thermal Expansion interface. To include this multiphysics interface in the simulation:

A screenshot of the Model Builder, with the thermal microactuator model open and the Electromagnetic Heating interface expanded.
A screenshot of the physics and multiphysics nodes (each with with the corresponding settings) that are automatically added to the model tree when using the automatic approach.

The Electromagnetic Heating multiphysics coupling uses the electric current and the electric conductivity to add the resistive heating as a heat source in the heat transfer equations. Note also that temperature may influence the electrical and thermal conductivities. The Thermal Expansion multiphysics coupling uses the temperature field and the coefficient of thermal expansion in the formulation of the thermal strain vector in the structural mechanics model, yielding the expansion and the stresses and strains caused by this expansion when the model is computed. 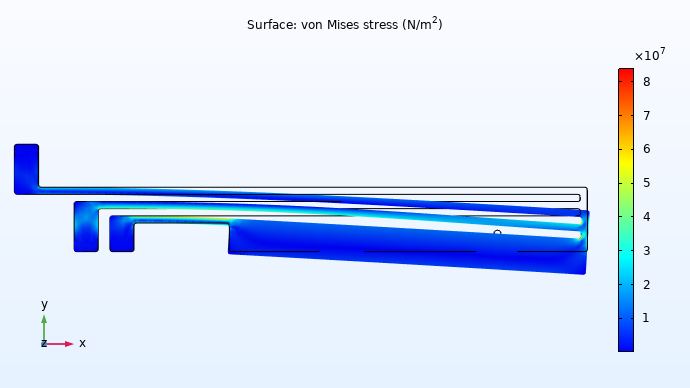 An xy-plane view of the results for stress and deformation of the thermal microactuator.

As you can see, the automatic approach makes a complex problem quite easy to define and solve. You don’t have to worry about recalling if you’ve included the correct multiphysics nodes, applied the appropriate settings from one physics interface to another, or defined the proper solver settings, since it is all automated.

From this point forward, we can focus on defining the physics settings for each individual physics interface, such as adding any necessary boundary conditions or constraints and editing the settings.

To see how to build the complete model using this approach, watch the tutorial video below for a full demonstration.

Demonstrate the knowledge you have gained from this article by putting it into practice with the follow-up modeling exercises listed below. The directions provided for each modeling exercise contain all the information necessary in order to complete it, but are intentionally generalized to encourage self-guided problem solving. You can check your implementation with the solution model files provided here manually or use the Comparison tool to exactly identify the differences.