Geometry optimization of a 3D complex-shaped coil for induction heating

The model features the optimization of the geometry of a complex-shaped coil similar to those for induction heating applications. The geometry if fully built and parametrized in COMSOL Multiphysics (taking advantage of Geometry Parts; geometrical construction requires Design Module). The optimization target is to control the magnetic flux and this is done with standard built-in COMSOL optimization functionalities. Given a prescribed current, a cylindrical domain specifies the “Target region” where the field must be as uniform as possible; two other cylindrical domains specify the “Suppression region” where the field must be the minimized. A complex shaped coil is required to accomplish these requirements.

To improve the performance of the 3D optimization, a special formulation has been set up to describe magnetic fields: Magnetic Fields interface is coupled with Magnetic Fields, No Currents where a Magnetic Scalar Potential Discontinuity is used to implement an equivalent of the Single Conductor Coil without needing the Coil feature itself (and the associated Coil Geometry Analysis). This formulation is exact and fully capable of including 3D eddy currents.

To represent a realistic workflow, the optimization is first performed approximating the coil with a 2Daxi section (model [01]), where the first and last turn (half-open in the 3D geometry) are mimicked by a parameter. The output of the 2Daxi analysis is used as initial guess for the 3D optimization, performed in model [02]; also, one control variable is fixed to its maximum allowed value. Nelder-Mead is used for the 3D optimization, while in 2Daxi we use the gradient-based SNOPT and Moving Mesh. The results of the optimal geometry are finally validated in model [03] using the standard Magnetic Fields + Single Conductor Coil interface.

The entry contains the presentation and three models:

• 03. Validation of the results against two other implementation: 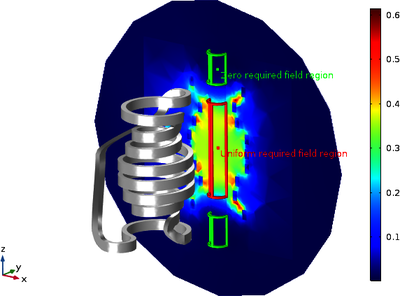 This application example illustrates applications of this type that would nominally be built using the following products: