Today, many are celebrating Ada Lovelace Day around the world. This day is not a public holiday, but a day to honor women in science, technology, engineering, and mathematics (STEM).

Who Was Ada Lovelace and What’s Her Day all About?

Ada Lovelace is, of course, not famous for creating a day in her own name. The day was first created by Suw Charman-Anderson as recently as 2009 and named after Ada Lovelace to celebrate all women in STEM.

Why single out this particular woman’s name? Well, she was quite extraordinary; you might say she was before her time. Born on December 10, 1815, Lovelace is considered one of the first computer programmers.

She did not inherit her interest in mathematics from her father, poet George Gordon, Lord Byron. No, it was her mother, Annabella Milbanke, who stressed the importance of science, math, and logic, in an attempt to dissuade her from taking after her father’s poetic traits. Growing up, Lovelace spent her days designing machines and boats and studying the Industrial Revolution inventions featured in science magazines. 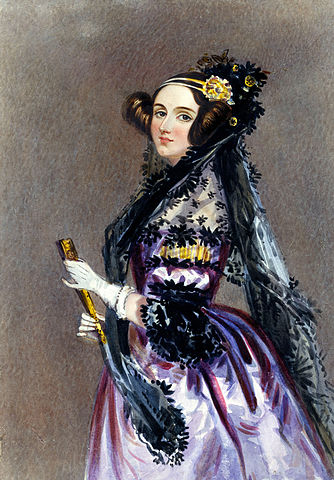 In 1833, Lovelace came into contact with Charles Babbage. This man was already famous for his fascination with machines — and the two got along swimmingly. Babbage had been working on a design for what he called the Analytical Engine, which was right up Lovelace’s alley. While Babbage was more concerned with conceptualizing the hardware for the machine, Lovelace focused on the software. She wrote an addendum to an article on using machines by manipulating symbols — sounds like modern-day coding, right?

She is said to have invented the theory of the subroutine, looping, and the conditional jump long before they were actually put into practice.

(You can read more about Ada Lovelace here and here.)

The international Ada Lovelace Day originates from the United Kingdom, but has come to be recognized in the STEM community around the globe. The concept is very simple: take a moment and honor your favorite female scientist, engineer, or mathematician.

Tip: Check out what people are saying on Twitter, by searching for #ALD14. Many people — both men and women — are weighing in with blog posts, articles, and 140-character comments of their own.

Engineering inventions: Fresnel lens and generator. Both from my recent trip to the Swedish National Museum of Science and Technology.

Behind Every Great Man, There’s a Great Woman

You know Alan Turing, the man who is often credited with inventing the computer? A remarkable man, Turing created the Turing Machine in 1936. This machine was basically an “idealized model of a computer” (wolframscience.com).

What does this have to do with Ada Lovelace? Turing was inspired by her notes on the Analytical Engine. Now known as Lady Lovelace’s Objection, she noted that computers are not capable of originality:

“The Analytical Engine has no pretensions whatever to originate anything. It can do whatever we know how to order it to perform. It can follow analysis; but it has no power of anticipating any analytical relations or truths.”

Turing, on the other hand, was consumed with the idea of artificial intelligence (AI) — a theory he had that computers would eventually be able to think on their own. But how would you know? He created the famous Turing Test that would reveal whether or not a computer was intelligent. In short, a judge would pose a question (via a computer terminal) to a human and a computer and then judge the answers to decide which one came from the human versus the computer. If the judge is wrong, the computer is thought to be intelligent.

Being at a multiphysics software company such as COMSOL, I work alongside both men and women with STEM backgrounds. If you asked me which scientist or engineer I admired most, I’d respond “My brilliant colleagues.” In the spirit of Ada Lovelace Day, I asked some of my female colleagues to tell me their story on being a woman in STEM. Here’s what three of them said.

Responses from Fellow Ladies in STEM

“It is a great thing to be a woman in STEM. To be able to play an integral part in the daily life that our parents/grandparents could have only dreamed about. I think it is harder for women to show their worth in this industry, but those that shine do so brightly,” Susie Kimball noted.

“My mother and father [encouraged me to get involved in STEM]. My dad always let me build stuff with him and encouraged me to dig deep until I found what I wanted. My mother pushed me further by being one of the only females in her field, so I figured I would give it a shot for what I wanted to do in life. They laid the groundwork for me to know I could do it (and helped along the way). Whether it was connecting me with a colleague who knows about HVAC for a fluid flow project so I could understand it better, to dismantling a car’s front end on the weekend to get the exact angles and dimensions for a math project for oval track racing.”

When asked which female scientist, engineer, or developer she admires most, she said: “I admire a few: My sixth grade science teacher who showed us it was fun and could turn the hardest topic into a fun experiment! Two of my college roommates who I still chat with today. The three of us are in the STEM field, doing what we love, and chat about it frequently. It is really them [sic] that keep me going.”

My other colleague, Web Developer Jessica Roy Mitchell, mentioned that she sometimes forgets that she’s even a part of the STEM group. She went on to say that “Thinking back to my education it is worth noting that I was the only female in my [Computer Science] CS classes, while my art classes were much more dominated by my gender, or close to equally split.”

Amelia Halliday, whom you may know from this very blog, responded: “I was fortunate enough to be both encouraged and inspired by a few teachers along the way in my education. The most memorable being my calculus teacher in high school, who was a woman. She encouraged me to conduct my own research and exploration with math and its role in nearly all facets of our everyday lives. I will always remember how fascinating I found partial differential equations to be, in that nearly all physical phenomena that we experience on this planet can be described mathematically.”

In terms of who she admires most, she said “I don’t necessarily admire any individual, more so the average, everyday women that work in STEM roles within organizations. From my high school teachers in mathematics and science to some of the very women I work with in this COMSOL office — you need not be in a position of power to evoke admiration. Those are the women who I admire. They are living proof to the youth that it is possible.”