In the previous installment of this series, we explained two concepts needed to model the release and propagation of real-world charged particle beams. We first introduced probability distribution functions in a purely mathematical sense and then discussed a specific type of distribution — the transverse phase space distribution of a charged particle beam in 2D. Now, let’s combine what we’ve learned and find out how to sample the initial positions and velocities of 3D beam particles from this distribution.

To start, let’s briefly review phase space distributions and ellipses in 2D, both of which are fully explained in the previous post in the Phase Space Distributions in Beam Physics series. The particles in real-world nonlaminar charged particle beams occupy a region in phase space that is often elliptical in shape. The equation for this phase space ellipse in 2D depends on the beam emittance ε and Twiss parameters,

where x and x’ are the transverse position and inclination angle of the particle, respectively. The Twiss parameters are further related by the Courant-Snyder condition, 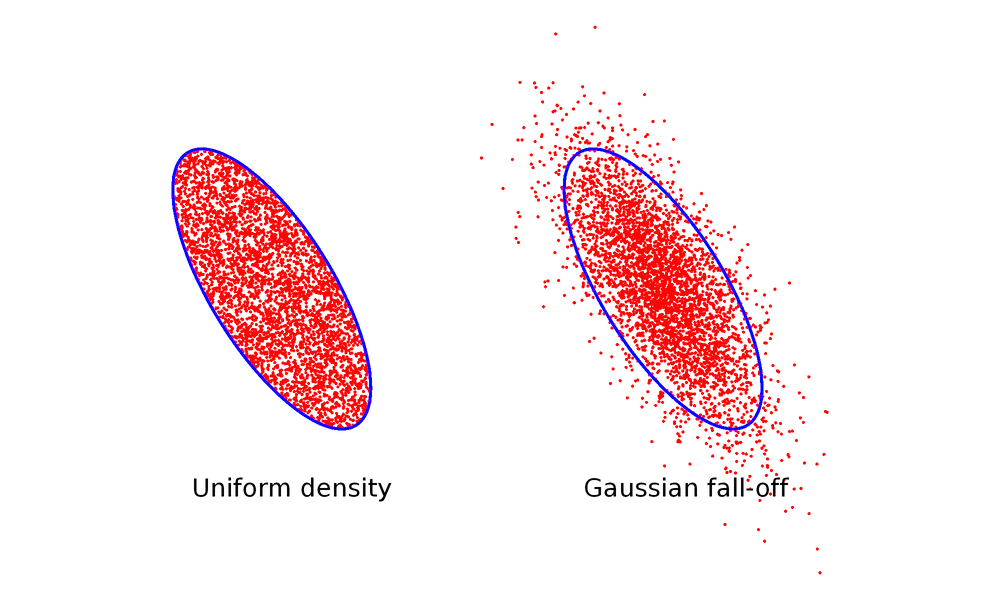 Comparison of a uniform and Gaussian distribution.

Let’s consider a simpler case in which the probability of finding a particle at any point in phase space is constant inside the ellipse and zero outside of it. For this problem, substituting Eq.(2) into Eq.(1) and solving for x’ yields

The probability distribution function is then

where the constant C depends on the size of the ellipse. The probability g(x) of the particle having a given x-coordinate is

Considering the locations where Eq.(3) can take on real values, we get

Suppose we have a population of model particles that we want to sample using the probability distribution function given by Eq.(4). More specifically, we’d like to first sample the initial transverse positions of the particles according to Eq.(5) and then assign appropriate inclination angles so that the particles lie within the phase space ellipse. One way to accomplish this is to compute a cumulative distribution function starting from Eq.(5) and then use the method of inverse random sampling. Another possible method is using Eq.(5) to define the density of particles, which we can enter directly into the Inlet and Release features in the particle tracing interfaces. In this case, the normalization is done automatically. 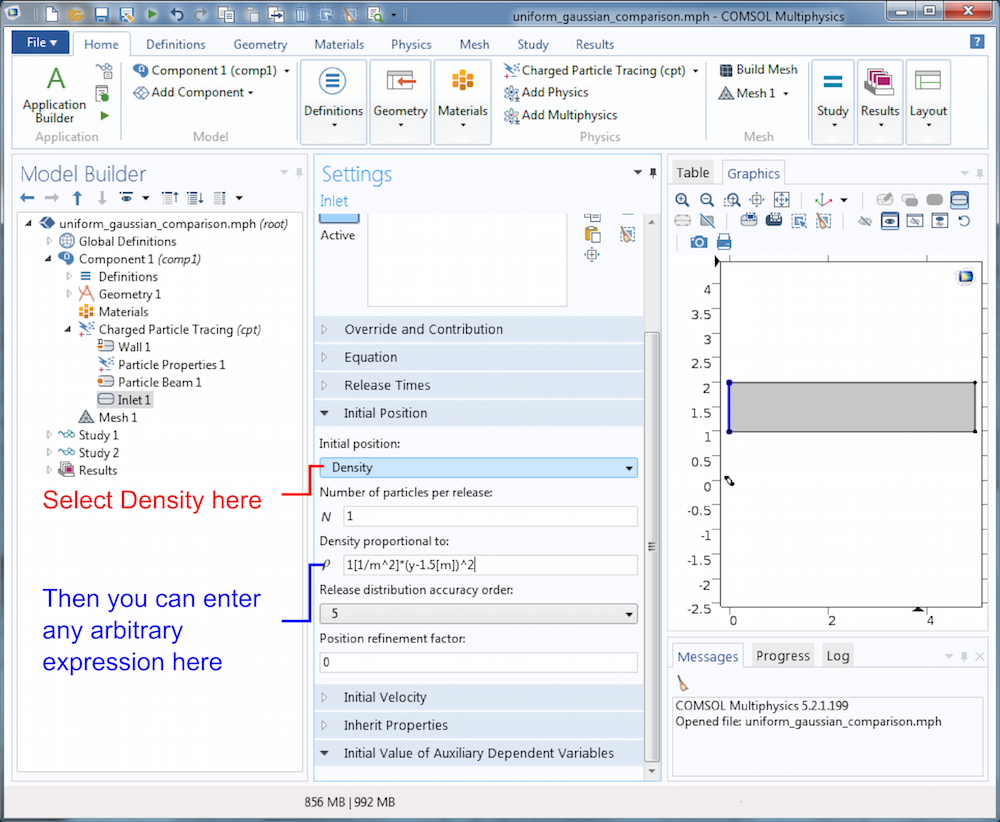 Screenshot showing how to input the particle density in the Inlet feature. 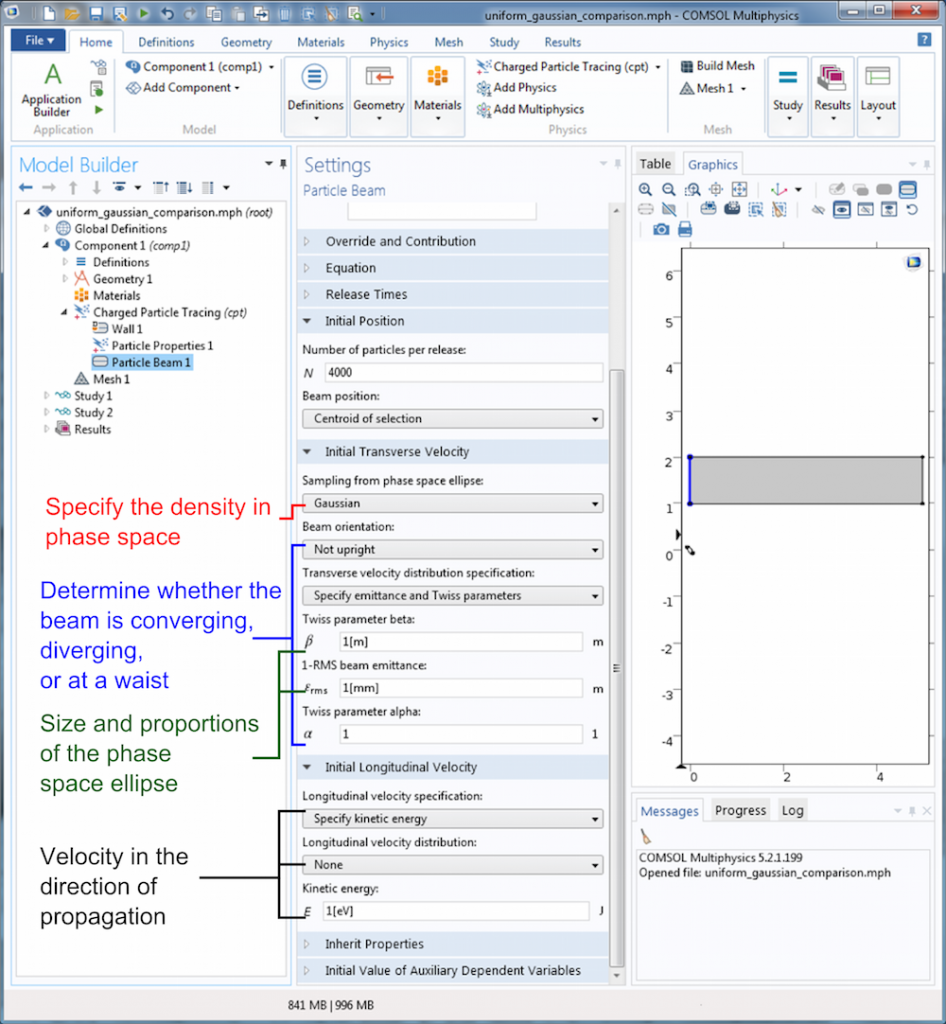 Screenshot showing how to input the particle density in the Particle Beam feature.

So far, we’ve only considered charged particle beams as idealized sheet beams where the out-of-plane (y) component of the transverse position and velocity can be ignored. However, real beams propagate in 3D space and only extend a finite distance in both transverse directions. Thus, in order to get a complete picture of a beam, we must consider two orthogonal transverse directions x and y as well as the inclination angles x' = v_x/ v_z and y' = v_y/v_z. 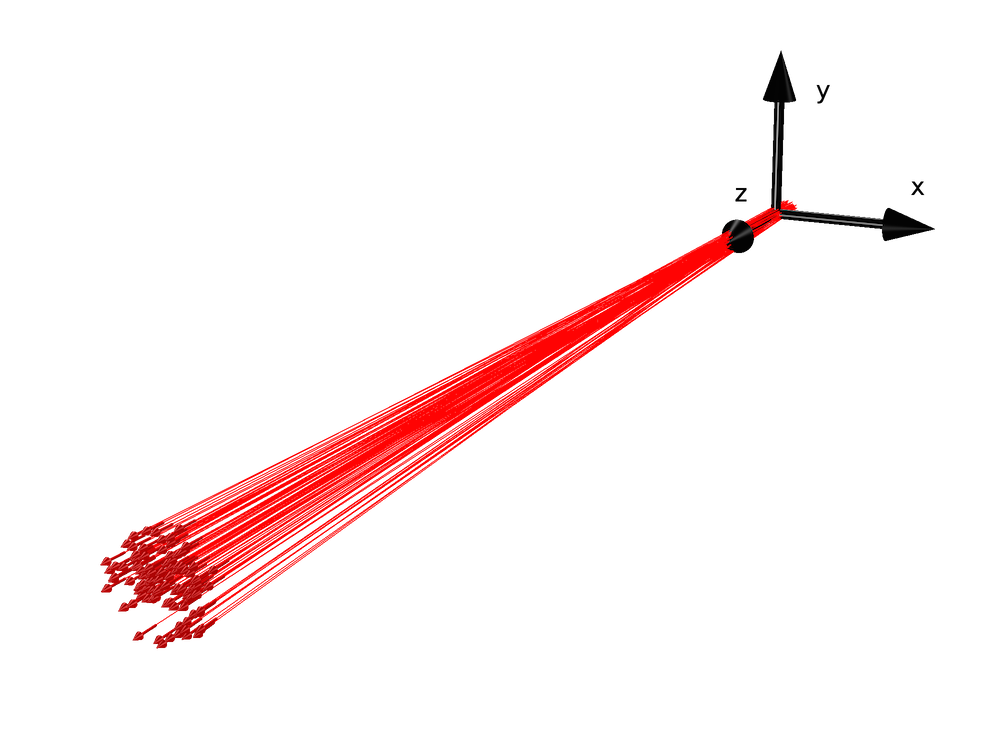 To phrase this problem in a more abstract sense: Instead of considering the two transverse directions as separate 2D phase space ellipses, we actually need to think about the transverse particle motion using distributions of phase space in four dimensions! Since we’re used to seeing objects only in 2D or 3D, distributions with more than three space dimensions are much harder to visualize.

Mathematically, the KV distribution considers the beam particles to be uniformly distributed on an infinitesimally thin, 4D hyperellipsoid in phase space. It’s written as

where rx and ry are the maximum extents of the beam in the x and y directions, εx and εy are the beam emittances associated with the two transverse directions, and r’x and r’y are the inclination angles at the edge of the beam envelope.

Because it is more difficult to visualize 4D probability distribution functions than functions of lower dimensions, it is often convenient to visualize the distribution indirectly by plotting its projection onto lower dimensions. An interesting property of the KV distribution is that its projection onto any 2D plane is an ellipse of uniform density. The projections onto six such planes are shown below. The projections of the 4D hyperellipsoid onto the x-x’ and y-y’ planes are tilted because nonzero values have been specified for the Twiss parameter α in each transverse direction. 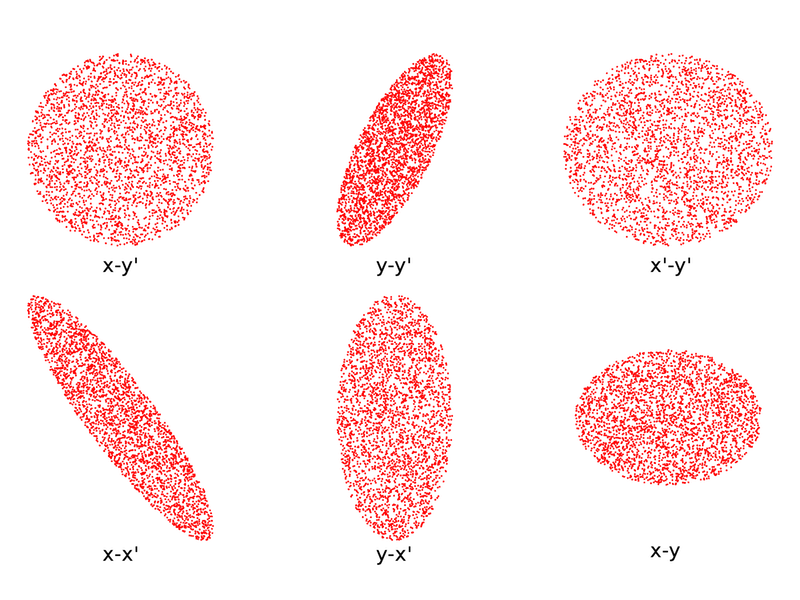 Compare the distributions shown above to the following alternatives. 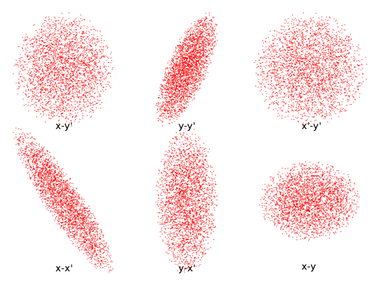 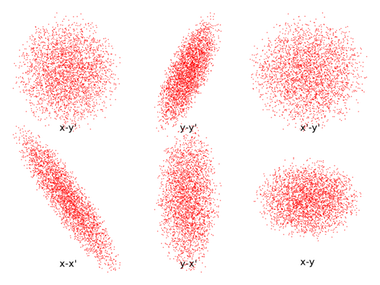 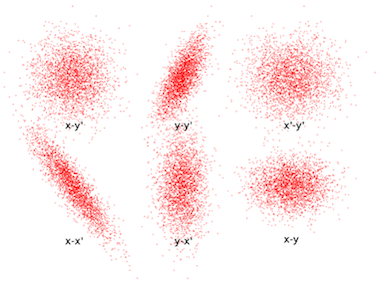 We see that the projection onto any 2D plane forms an ellipse-shaped distribution in all cases, but the ellipses are only uniformly filled in the KV distribution.

Even as this blog series on modeling charged particle beams comes to a close, we have only scratched the surface of the intricate and highly technical field of beam physics. While we’ve discussed transverse phase space distributions in 3D, we haven’t examined longitudinal emittance or the related phenomenon of bunching. We also haven’t categorized the phenomena that causes emittance to increase, decrease, or remain constant as the beam propagates.

This series is meant to be an introduction to the way in which random or pseudorandom sampling from probability distribution functions plays an important role in capturing the real-world physics of high-energy ion and electron beams. For a more comprehensive overview of beam physics, references 1-3 provide an excellent starting point. More technical details about each of the 4D transverse phase space distributions described above, including algorithms for sampling pseudorandom numbers from these distributions, can be found in references 4-7. To learn more about how these concepts apply in the COMSOL Multiphysics® software, browse the resources featured below or contact us for guidance.