Back To Press Release Gallery

You are currently viewing contact information for:
Zoetermeer, Netherlands

The power of multiphysics simulation reaches all elements of product and process design projects with the introduction of the Model Manager server, which facilitates the collaboration between stakeholders and colleagues working on a modeling and simulation project.

BURLINGTON, MA (April 26, 2022) — COMSOL announces a major update to the COMSOL Multiphysics® software version 6.0. The update builds out the Model Manager server with a web interface — an asset management system — to make it easier for COMSOL® users and nonusers alike to manage models, simulation apps, and supplementary and auxiliary files.

Through two decades of development, COMSOL Multiphysics® evolved from a software that solved partial differential equations to one that defines the nature of multiphysics modeling: being able to build models with any combination of physics phenomena via the Model Builder. Thereby, engineers versed in the underlying physics and using software to build models began using COMSOL Multiphysics® across technology-driven industries, academia, and research organizations for modeling and simulation. Next, COMSOL introduced the Application Builder and concept of simulation apps to expand the realm of who could access simulation to include those who had not traditionally been able to work with models and simulations.

Today, COMSOL completes the environment for managing modeling and simulation projects for product and process design through the recently introduced Model Manager and the Model Manager server with its accompanying asset management system.

About the Model Manager Server and Its Asset Management System

Released in December 2021, the Model Manager allows you to: 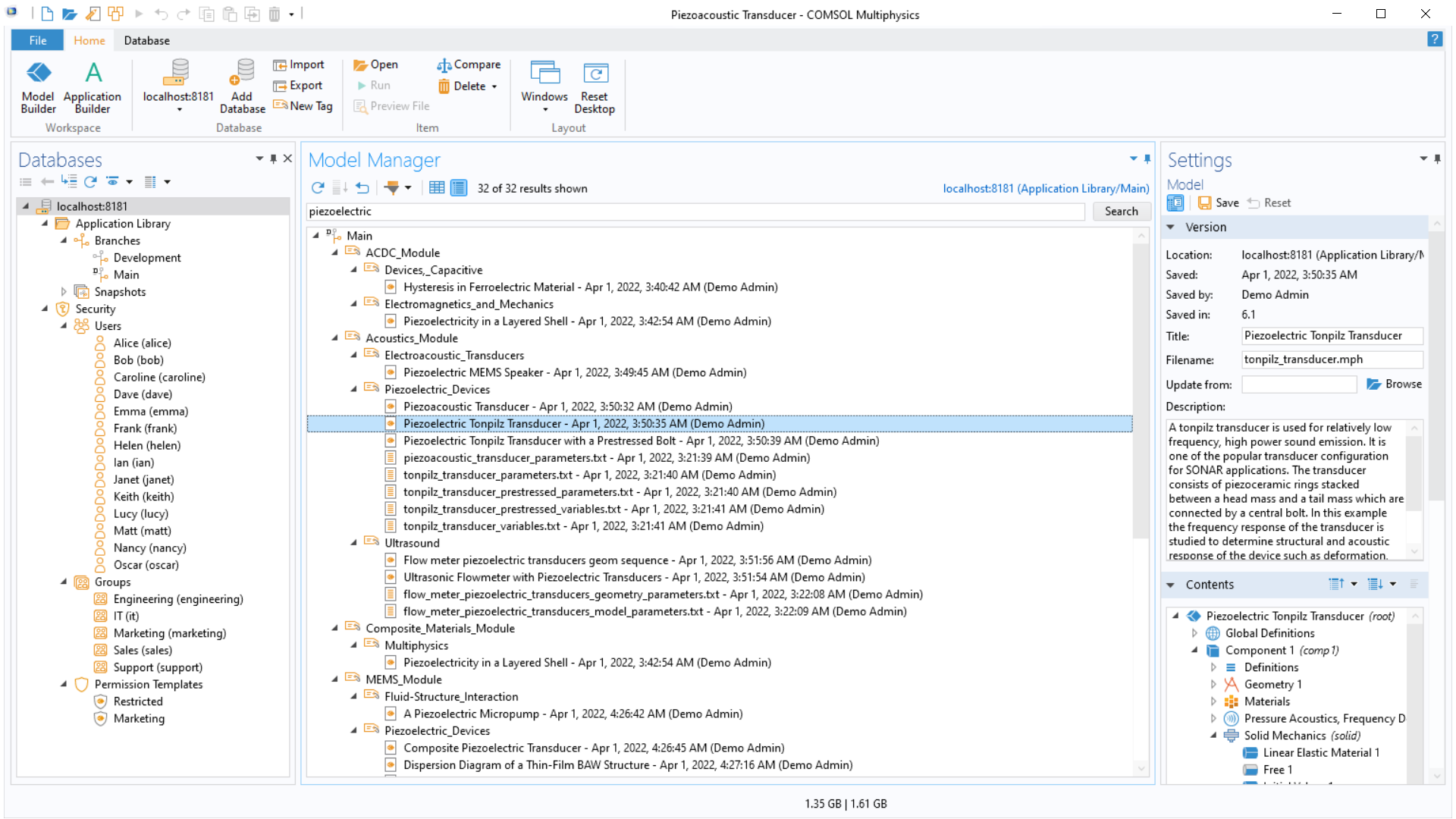 A screenshot from the Model Manager UI within the COMSOL Desktop® that shows the different databases that have been set up to administrate and structure models, along with branching, version control, feature lists, and the folder system used to manage the simulation. The model tree of a selected model can be previewed without opening the model.

“As an extension of the COMSOL Multiphysics® simulation platform, the Model Manager server's asset management system is useful for administrating and managing your models, apps, and simulations in a corporate network environment set up to your own liking,” says Sr. VP of Sales Phil Kinnane. “This could be project-based, model-based, team-based, or similar, according to how you want your organization to structure and organize such work.” 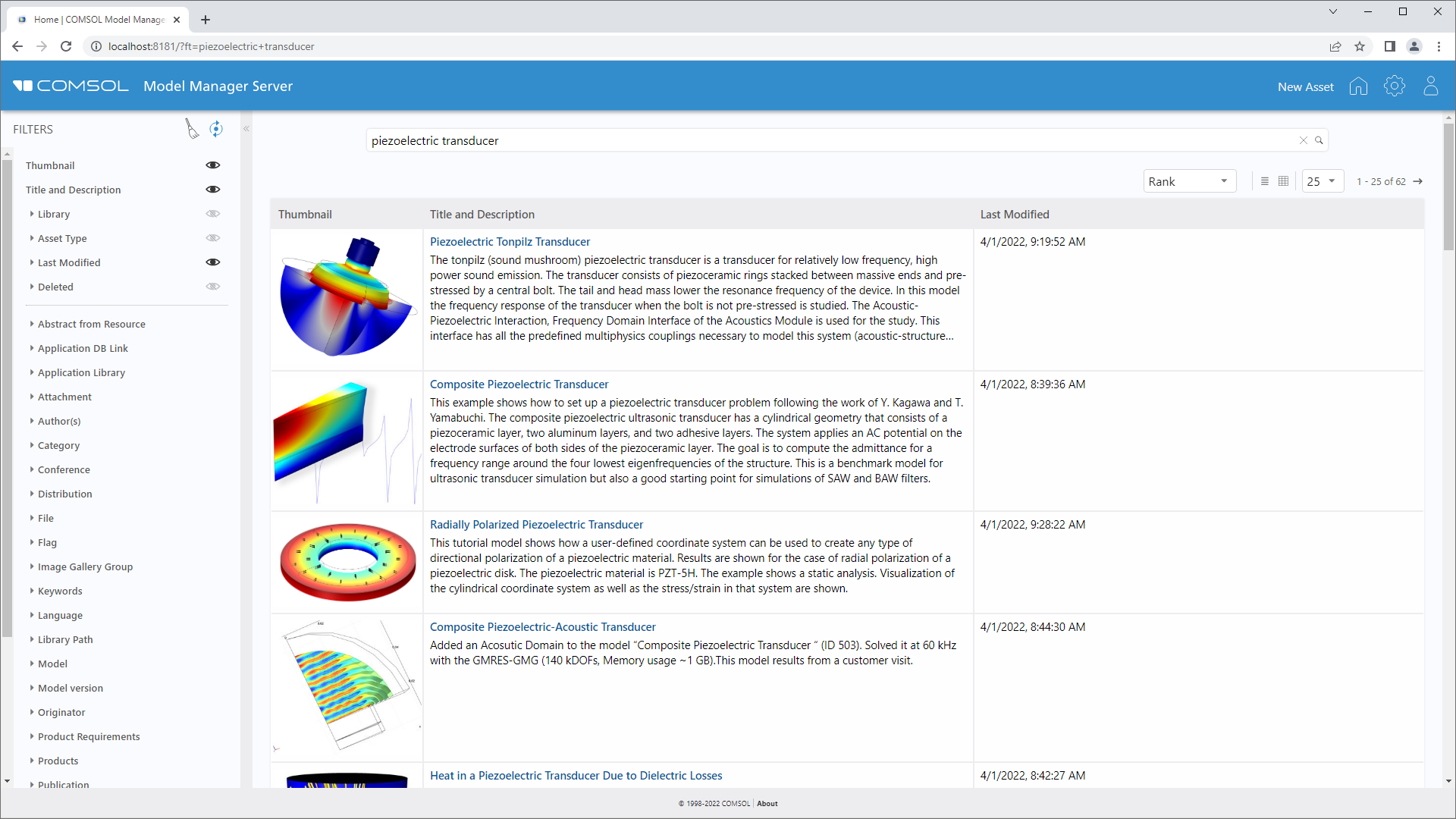 A Collaborative Environment to Cover All Elements of an Organization

The Model Manager server is a database system that can be managed from either the COMSOL Desktop® or a web-based UI. A local installation of any license type of COMSOL Multiphysics® with the Model Manager and a local database is usually the initial step for a modeling engineer to acclimatize themselves to how this system can be best used within their organization. From there, full deployment can occur by installing the Model Manager server on a central server. Local installations of COMSOL Multiphysics® can connect to the central server with the Model Manager server. “I think organizations will start by moving the tens and hundreds of COMSOL models they have been developing over the years to their asset management systems as a communal model library,” adds Kinnane. “Instead of chasing down the many engineers using the software for different purposes, they can now find and search through those models as a centralized repository instead.”

The Full Power of the Model Manager Server

COMSOL CTO Ed Fontes describes how the Model Manager server will take an organization’s simulation-driven project to the next level: “The true power of the Model Manager is not only in its ability to manage your simulation data, but in being able to version control and audit your actual model-building process.” He adds, “there are a number of simulation data management systems out there, but COMSOL has focused the Model Manager on the model-building process, such as to easily browse through the model tree of certain models or search for specific features like domain settings, boundary conditions, or study types to revisit, update, or even reuse.”

Internal or external customers may use the database system to keep track and use results from a project. They may also use simulation apps and provide feedback about their measurement and test data by uploading them and reports to the relevant asset. And, of course, contributors on the model development can also add their auxiliary data, such as CAD files and specifications, to the project. “In all,” says Fontes, “the Model Manager server and asset management system truly provide the complete working environment for modeling and simulation projects.”

Learn More About the Model Manager

COMSOL is a global provider of simulation software for product design and research to technical enterprises, research labs, and universities. Its COMSOL Multiphysics® product is an integrated software environment for creating physics-based models and simulation apps. A particular strength is its ability to account for coupled or multiphysics phenomena. Add-on products expand the simulation platform for electromagnetics, structural, acoustics, fluid flow, heat transfer, and chemical applications. Interfacing tools enable the integration of COMSOL Multiphysics® simulations with all major technical computing and CAD tools on the CAE market. Simulation experts rely on COMSOL Compiler™ and COMSOL Server™ to deploy applications to their design teams, manufacturing departments, test laboratories, and customers throughout the world. Founded in 1986, COMSOL has 17 offices worldwide and extends its reach with a network of distributors.