Back To Press Release Gallery

You are currently viewing contact information for:
Burlington, MA, USA 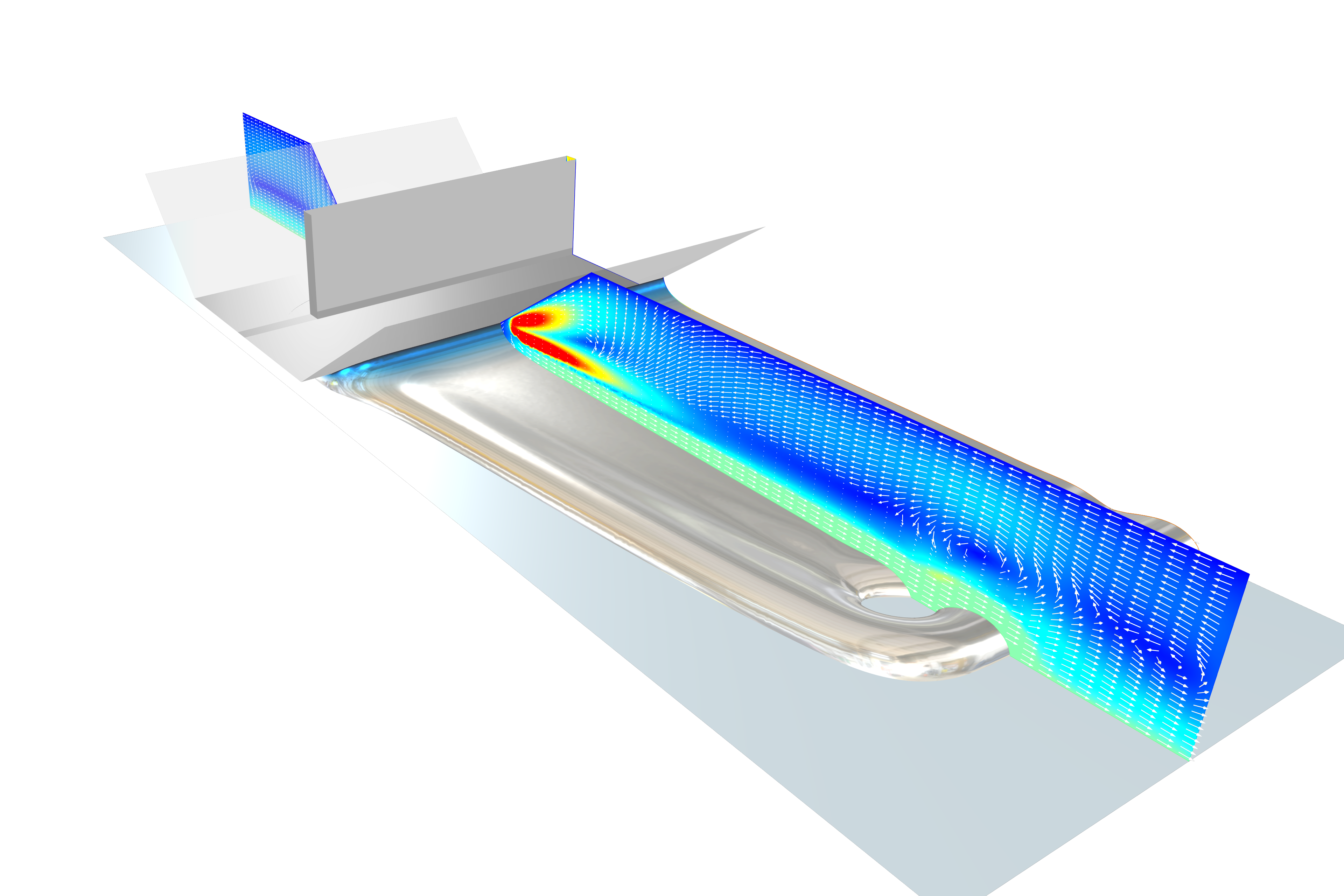 Solver performance has greatly improved in version 5.6, to the benefit of COMSOL® users working with large models that have millions of degrees of freedom. "In version 5.6, we have made general improvements to both the algebraic multigrid and the domain decomposition solver technologies. These improvements benefit most models using these solvers, giving performance improvements up to 30%. The improvements are even more pronounced when using clusters, giving improvements in the range of 20–50% for both CPU time and memory requirements. For CFD, we have improved the coupled velocity-pressure preconditioner and also added a brand new preconditioner that decouples the updates of these variables. With all of these improvements, the CPU time improvements can even exceed 50% for time-dependent CFD,” said Jacob Ystrom, technology manager of numerical analysis at COMSOL. Certain classes of viscoelastic structural analysis are now more than 10 times faster. A new boundary element method formulation enables analyses of acoustics models that are up to an order of magnitude larger than previous versions. This type of analysis is useful within automotive and sonar research and development. 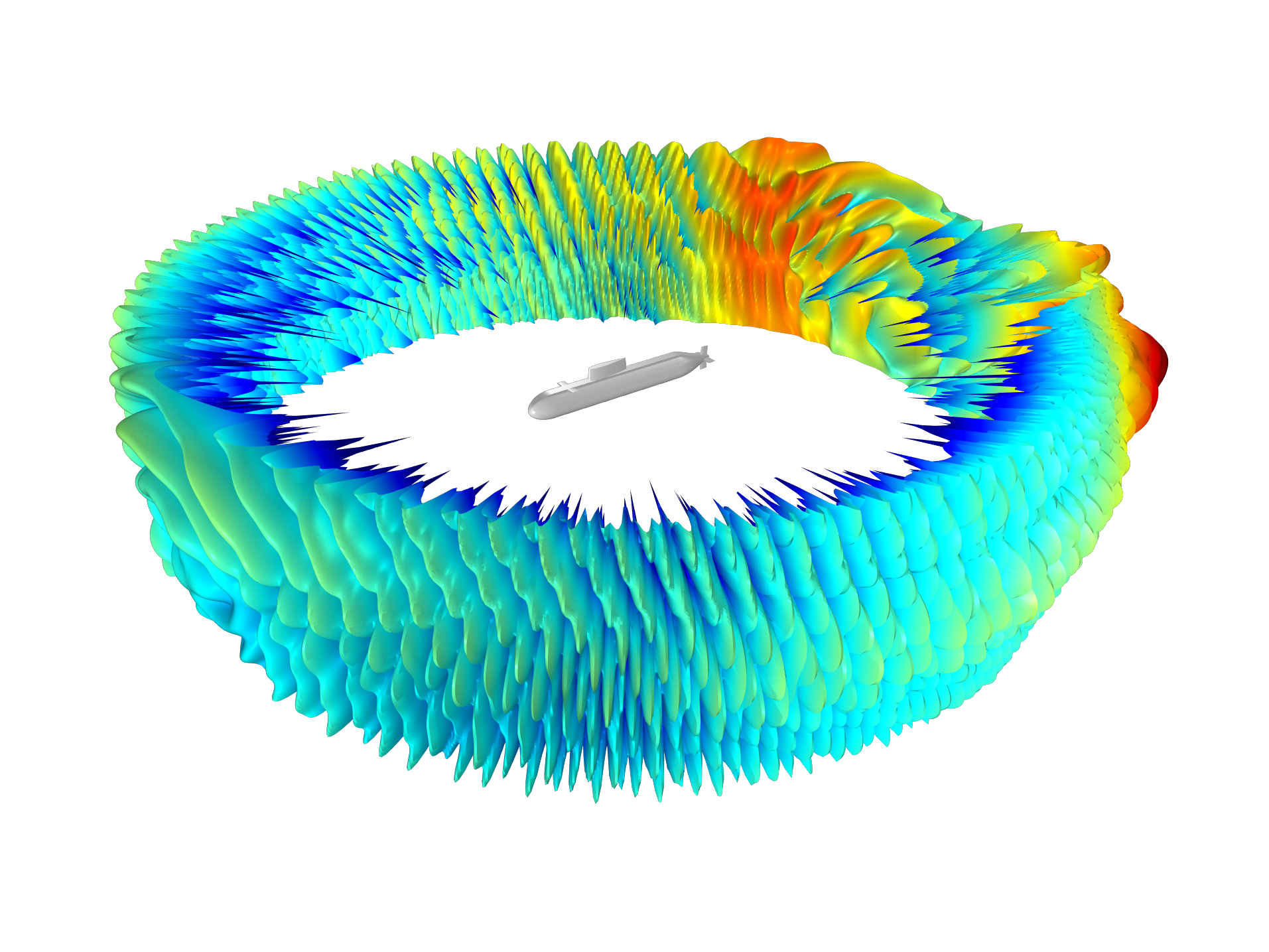 Clip planes enable easy selection of boundaries and domains inside of complex CAD models. Other graphics news includes visualizations that are partly opaque and partly transparent and the ability to make imported images part of a visualization. Material rendering of, for example, metals can be mixed with field visualizations and have environment reflections that look more real. Handling of larger CAD assemblies has improved with more robust solid operations and easier detection of gaps and overlaps in assemblies. In the Application Builder, new application templates provide a quick and intuitive way to create organized user interfaces for simulation apps. 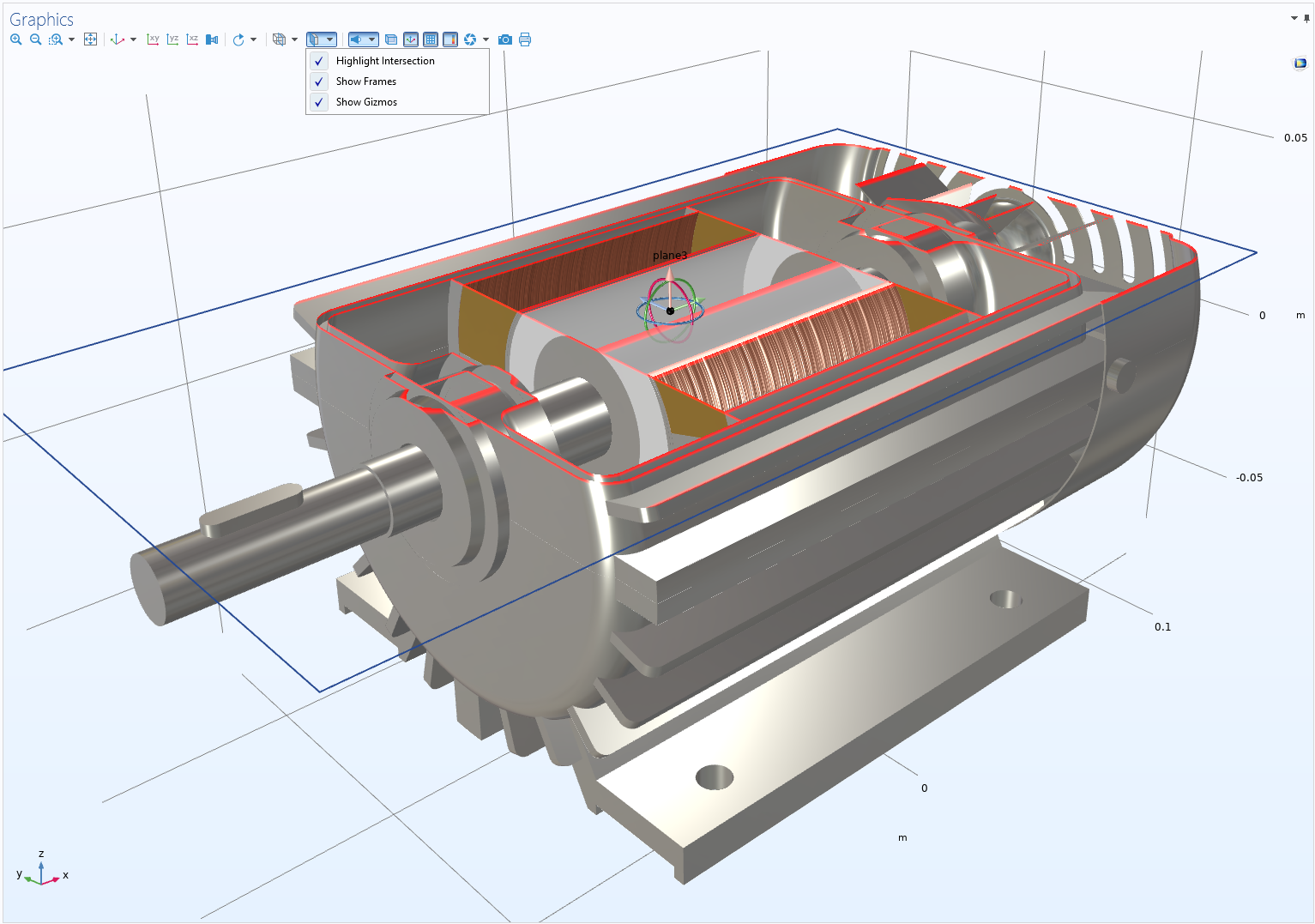 An electric motor simulation in COMSOL Multiphysics version 5.6, where a clip plane is used for easier access to the inside of the model for assigning material properties and loads.

Four new products expand what you can do with COMSOL Multiphysics, including modeling fuel cells and electrolyzers, polymer flow, control systems, and fluid properties.

The Fuel Cell & Electrolyzer Module provides engineers in hydrogen technology with new functionality for investigating the conversion and storage of electrical energy. "We see an important emergent market in the hydrogen economy, but also in understanding and optimizing existing electrolyzer processes. With this new product, we can provide users in the automotive, renewable energy, hydrogen technology, and electrochemical process industries with state-of-the-art modeling and simulation tools," said Henrik Ekstrom, technology manager of electrochemistry products at COMSOL. In version 5.6, the Batteries & Fuel Cells Module has changed its name to the Battery Design Module while retaining all functionality. Users with a current subscription of the Batteries & Fuel Cells Module will receive the Battery Design Module as part of the upgrade to version 5.6.

The Polymer Flow Module can be used to design and optimize processes involving viscoelastic and general non-Newtonian fluids, which is beneficial in industries such as polymer, food, pharmaceutical, cosmetics, household, and fine chemicals. In addition to the advanced rheology models, the module also features functionality for free surface tracking using two-phase flow.

The Liquid & Gas Properties Module can be used to compute properties for gas, liquids, and mixtures, enabling more accurate simulations within acoustics, CFD, and heat transfer.

Engineers can use the LiveLink™ for Simulink® product for control design and cosimulation of COMSOL Multiphysics models in Simulink diagrams. Simulink® is a product by The MathWorks, Inc. 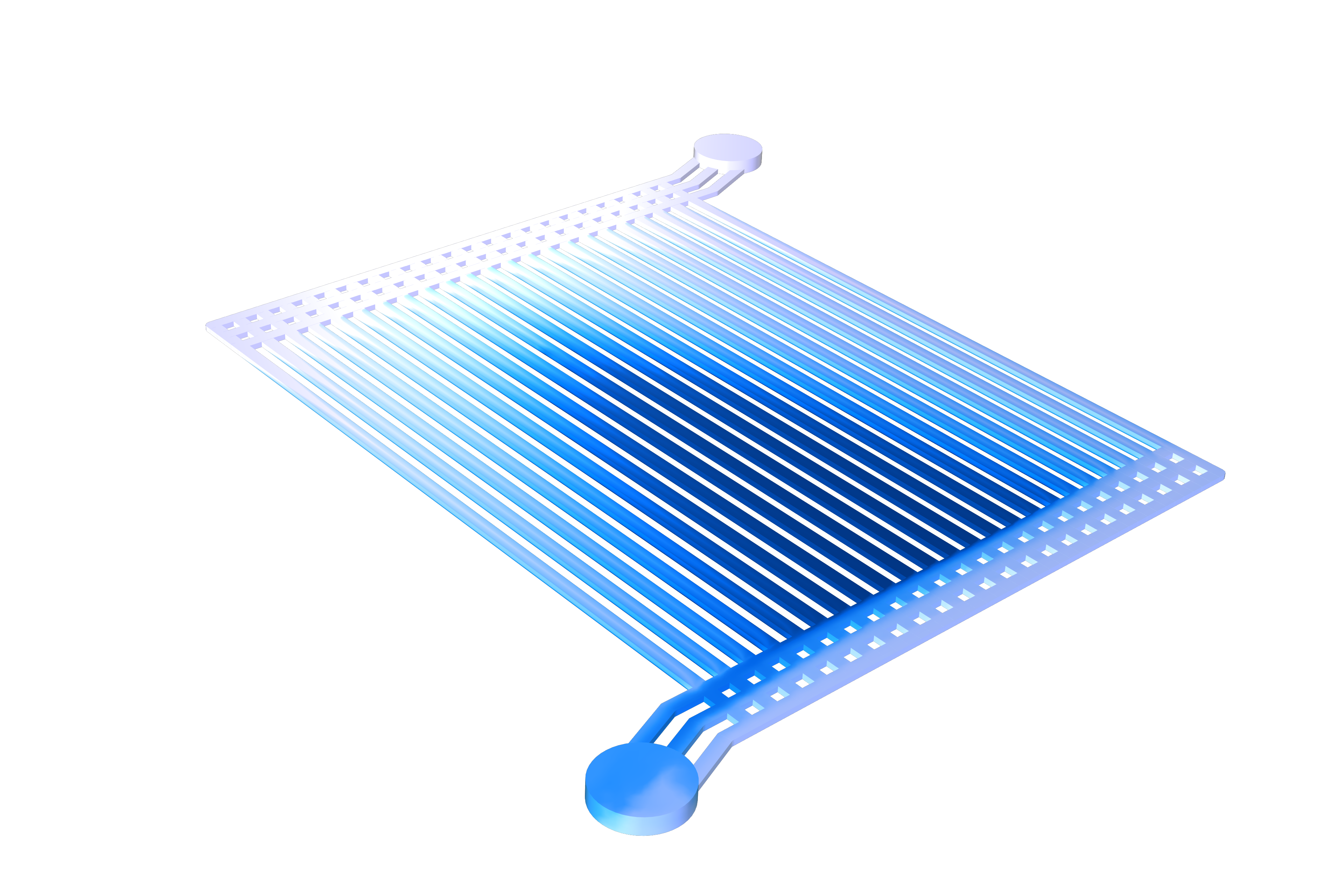 The AC/DC Module includes an expanded material library with 322 new magnetic materials from Bomatec. The material data contains several types of permanent magnets, such as NdFeB, SmCo, and AlNiCo, with properties that depend on the temperature and the electromagnetic field. The new version of the AC/DC Module also provides specialized tools for the extraction of parasitic inductance with L-matrix computations, which is essential for designing printed circuit boards. New nonlinear material models are useful for modeling laminated iron core losses in electric motors and transformers.

The RF Module and Wave Optics Module provide a new option for port sweeps that enables faster computations of full S-parameter, transmission, and reflection coefficient matrices. For periodic structures within metamaterials and plasmonic devices, a new powerful polarization plot tool makes evaluation and visualization of transmitted and reflected waves significantly easier. The Ray Optics Module enables faster ray tracing and offers specialized tools for scattering from surfaces due to surface roughness and within volumetric domains due to Rayleigh and Mie scattering from particles. A multiphysics model of a cascaded cavity filter operating in the millimeter-wave 5G band, including temperature changes and thermal stress. The visualization demonstrates the new functionality for partial transparency.

In the Composite Materials Module, the functionality for analyzing poroelastic effects has been expanded to include composite shells. Applications include the simulation of layered soil, paperboard, fiber-reinforced plastic, laminated plates, and sandwich panels.

The suite of nonlinear multiphysics material models in the MEMS Module now includes ferroelectric elasticity, which can be used for modeling nonlinear effects in piezoelectric materials such as hysteresis and polarization saturation. This functionality is also available by combining the AC/DC Module with either the Structural Mechanics Module or the Acoustics Module. A transient contact simulation of striking a golf ball with an iron.

The Acoustics Module can now be used to simulate high-intensity ultrasound as well as sound distortion in mobile device loudspeakers caused by nonlinear thermoviscous effects. New mechanical port conditions, available in the Structural Mechanics Module, Acoustics Module, and MEMS Module, simplify the analysis of vibration paths and mechanical feedback in applications involving the propagation of ultrasonic elastic waves, such as ultrasonic sensing and nondestructive evaluation. Audio engineers will appreciate the Acoustics Module's new room acoustics metrics for improving the sound quality of rooms and concert halls, including reverberation time and clarity based on ray acoustics simulations. 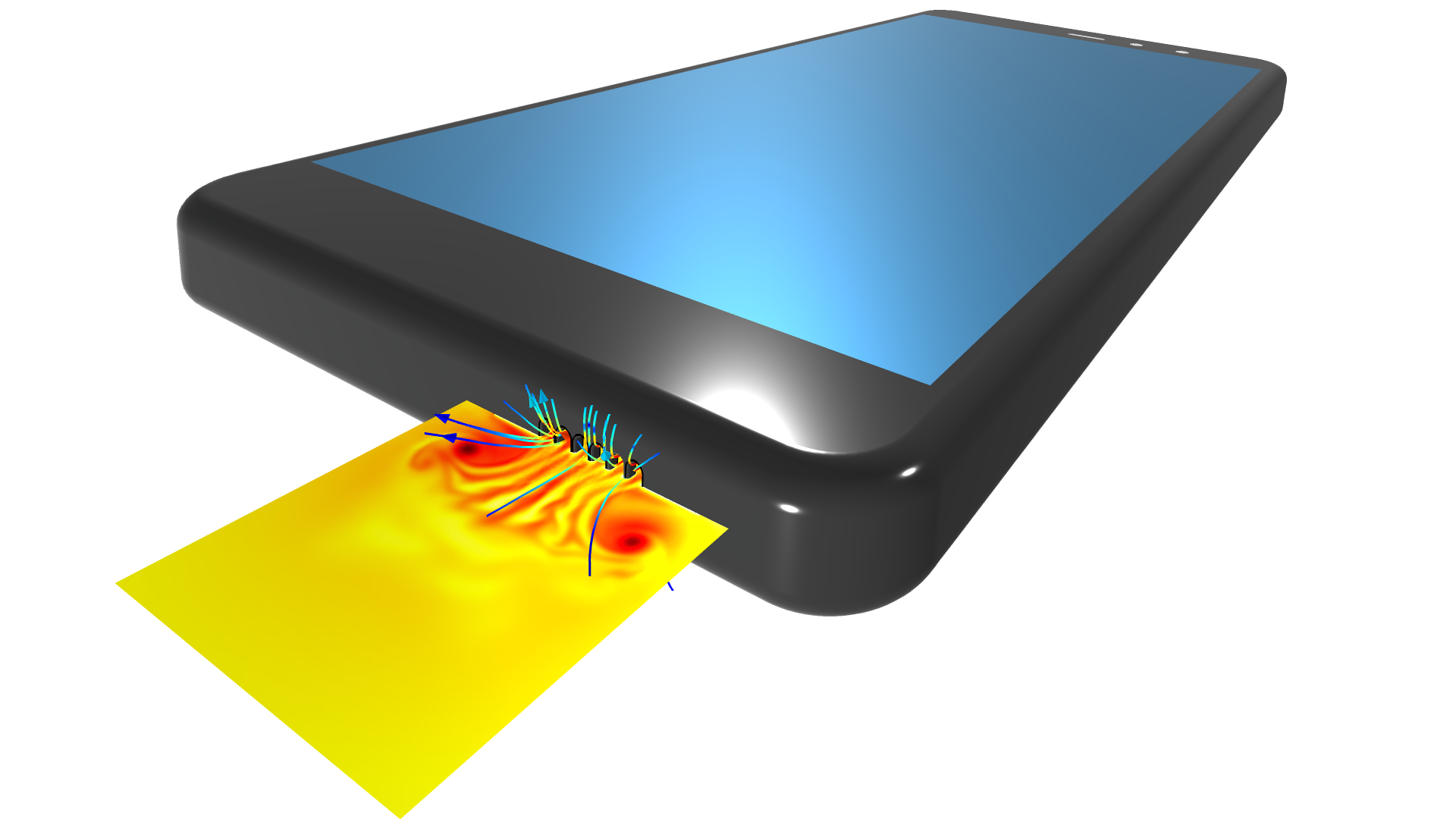 Acoustic velocity and thermal perturbations showing vortex shedding as a large-amplitude pressure wave interacts with a grid with small narrow slits. This type of nonlinear thermoviscous acoustics effect is important in the analysis of high-fidelity mobile device loudspeakers.

The CFD Module features new powerful tools for modeling combinations of separated and dispersed multiphase flow including support for compressible dispersed multiphase flow. Engineers and scientists can now easily model free surfaces in combination with dispersed multiphase flow to study problems like millions of small bubbles bursting through a free liquid surface. A new nonisothermal mixture model interface for multiphase flow can be used for phase change phenomena such as boiling. In the Porous Media Flow Module and Heat Transfer Module, there is a new transport in porous media interface that enables you to model two-phase flow of moisture transport by vapor convection and diffusion coupled to liquid water convection and capillary flow. The Particle Tracing Module has new functionality for modeling droplet evaporation, which is important for understanding the spread of contagions as well as a range of industrial processes.

Researchers and engineers working with hydrological applications will benefit from the new option for simulating the shallow water equations, now available in the CFD Module. The shallow water equations are frequently applied in oceanographic and atmospheric applications to predict effects of tsunami impacts, areas affected by pollution, coastal erosion, polar ice cap melting, and more.

In the Heat Transfer Module, new functionality for surface-to-surface radiation lets you define surface properties that are sensitive to the direction of heat radiation, with applications such as passive cooling of solar panels. To model glass surfaces as exterior boundaries in radiation in participating media, the new semitransparent surface functionality lets you specify an external radiation intensity and account for the part of this incoming intensity that is diffusively or specularly transmitted through the surface.

The Corrosion Module now includes a material library with more than 270 instances of polarization data. The Chemical Reaction Engineering Module features a new tool for automatic reaction balancing with stoichiometric coefficient computations as well as three predefined thermodynamic systems for dry air, moist air, and water-steam mixtures, with a wide range of applications. There is also a new reactive pellet bed interface in the Chemical Reaction Engineering Module for multiscale modeling of fixed bed reactors by defining a microscale of very small pores inside the catalyst's particles and a macroscale of larger pores between the particles (bimodal pore structure).

COMSOL is a global provider of simulation software for product design and research to technical enterprises, research labs and universities. Its COMSOL Multiphysics® product is an integrated software environment for creating physics-based models and simulation apps. A particular strength is its ability to account for coupled or multiphysics phenomena. Add-on products expand the simulation platform for electromagnetics, structural, acoustics, fluid flow, heat transfer and chemical applications. Interfacing tools enable the integration of COMSOL Multiphysics® simulations with all major technical computing and CAD tools on the CAE market. Simulation experts rely on COMSOL Compiler™ and COMSOL Server™ to deploy applications to their design teams, manufacturing departments, test laboratories and customers throughout the world. Founded in 1986, COMSOL has 20 offices worldwide and extends its reach with a network of distributors.