When solving a transient (i.e., time-dependent) study in COMSOL Multiphysics®, it is important to have your model set up so that the initial conditions are consistent with the loads and boundary conditions. This is important for any time-dependent model, but it is especially notable when performing transient fluid flow studies. In this article, we will explain why such consistency is important, its impact on your model, and the different approaches that you can use to solve the transient model equations when you have inconsistent initial values.

To illustrate with context why it is necessary for the initial values of your model to be consistent with the loads and boundary conditions, let us use an example. A simple fluid flow model is represented below, consisting of a 2D channel that is 3 meters long and 1 meter wide, where the left boundary is the inlet and the right boundary is the outlet. We want to solve for the laminar flow of a fluid through a channel. The fluid has a density of 1 kg/m3 and a viscosity of 0.01 Pa·s. A velocity of 1 m/s is specified at the inlet, and a zero-pressure boundary condition is applied to the outlet.

A diagram of the fluid flow example model.

When your model has inconsistent initial values, you may observe the solver taking very small time steps or ending the computation and reporting an error message like the following:

An error message stating the source of the error that prohibited the model computation from completing. 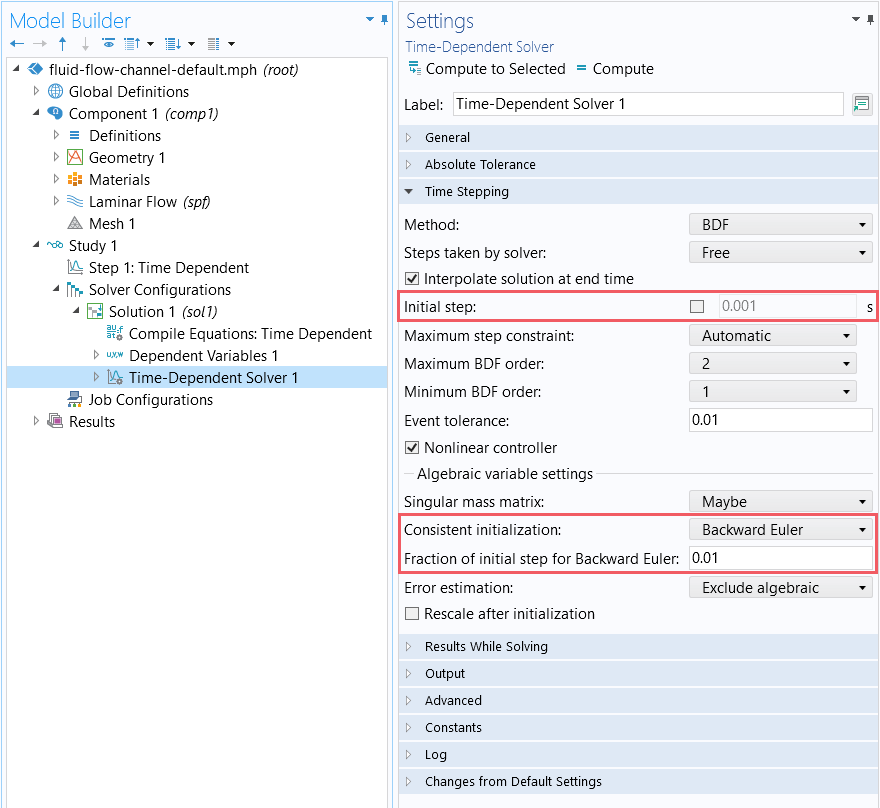 The Settings window showing the default settings for the Time-Dependent Solver.

The consistent initialization may fail if the backward Euler step is too large or if the boundary conditions in your model are inconsistent with each other or the physics in your model. More commonly, the results may be very far from what is expected, and the solver will likely need to take very small time steps at the beginning of the simulation to evolve from the initial solution. This is undesirable because it can lead to long solution times.

Please note that if your boundary conditions are truly inconsistent, then the resolutions in this article will not be applicable. Always check the applied loads and boundary conditions in your model carefully for consistency. The recommendations we outline here are only applicable to well-posed problems, so it is important that your model meet that threshold first.

The first approach you can use to solve a time-dependent model with inconsistent initial values is to initialize your transient study with a stationary study. There are a couple of ways that this can be done, as are described below.

A single study can include multiple study steps. By default, the results of each study step are passed on to the following study step as its initial values. When a Stationary study step is added before a Time Dependent study step, the study will solve first for the fields under the steady-state assumption and then use these computations to provide consistent initial values for the transient step, overriding the initial values specified within the Initial Values node in the physics interface. As long as the two steps are within the same study, as shown in the screenshot below, no other changes are needed. When the study is solved, both steps will be recomputed. 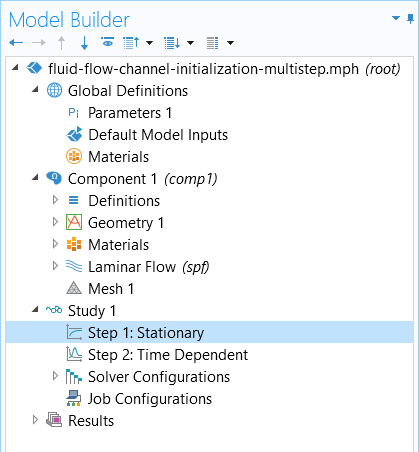 A Stationary study step is used to compute the initial values for the transient study step.

You can see this multistep approach firsthand in the attached model file for the fluid flow example introduced earlier. 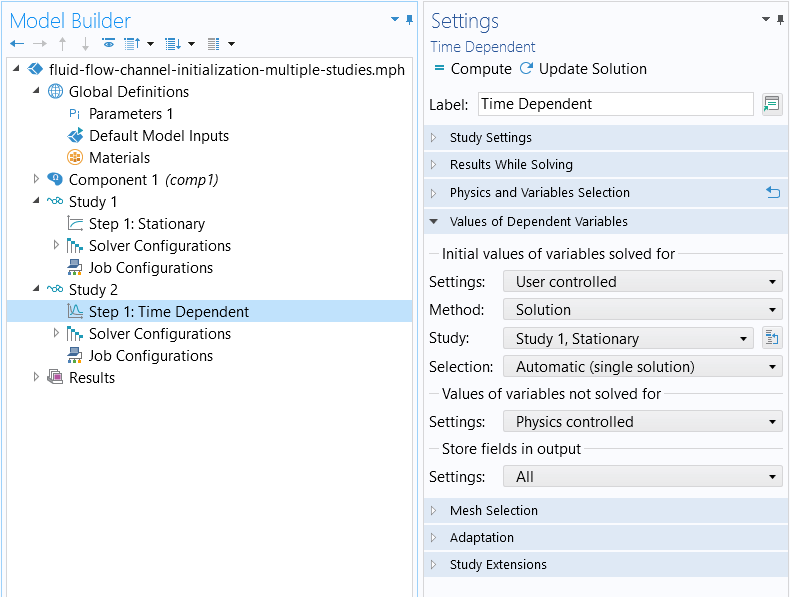 The settings for the Time Dependent study step node, which uses the initial values computed from the previous stationary study.

You can explore how this version of the approach was implemented for the fluid flow example in the model file included here.

Although this strategy is available, it does come with a number of drawbacks:

In either case, use the second method, described below.

When splitting the analysis into two separate studies, another option for referring to the results of the stationary study would be to use the withsol operator. The withsol operator enables you to extract and use the solution from one study as input for another study. It is equivalent to making the changes in the Values of Dependent Variables section of a study step's settings, discussed in the preceding section.

In the Initial Values node, we can enter the appropriate syntax for using the withsol operator, formatted as: withsol('tag',expr). For a split-study analysis, where 'tag' is, we enter 'sol1' to refer to the stationary study's solver sequence, and for expr, we enter the appropriate physics variable (u for the x-component of the fluid flow velocity field, v for the y-component of the fluid flow velocity field, or p for the pressure). 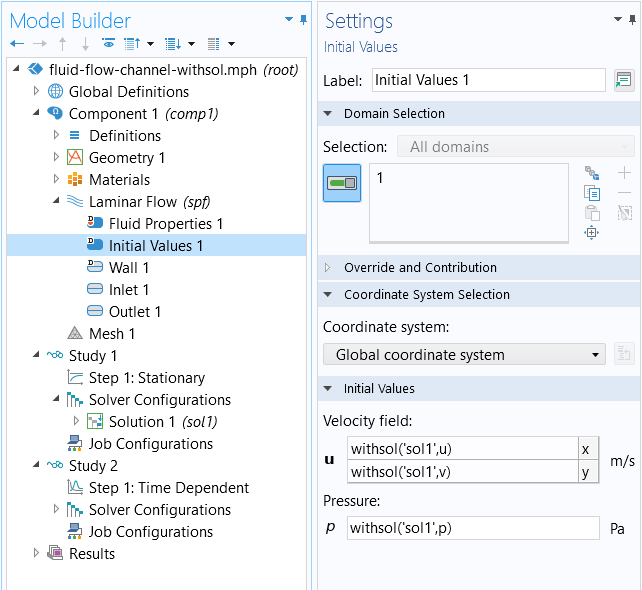 The settings for the Initial Values node, wherein the withsol _operator is used to refer to the solution for the stationary study.

More details and examples of using the withsol operator are available in our Learning Center article on this topic.

The second approach you can use to compute a time-dependent model with inconsistent initial values is to ramp up the loads and boundary conditions in your model over time.

The loads and boundary conditions in a transient model can be ramped up from values that are consistent with the initial values. The most common case is an at-equilibrium system, where the initial values are zero everywhere. The COMSOL Multiphysics® software includes several built-in functions that you can use to transition from these initial values to other values. In this example, we use the built-in Step function with smoothing, as shown in the screenshot below.

There are several other functions that also include a Smoothing option, as described here, where we discuss the modeling of step transitions. By default, these will all have a time derivative equal to zero at the start of the smoothing zone, which is helpful because there will be no abrupt step or change and it allows for a gradual transition.

We can use the smoothed Step function to modify the loads and boundary conditions of our transient fluid flow model, as shown in the screenshot below. The corresponding model file can be downloaded here. 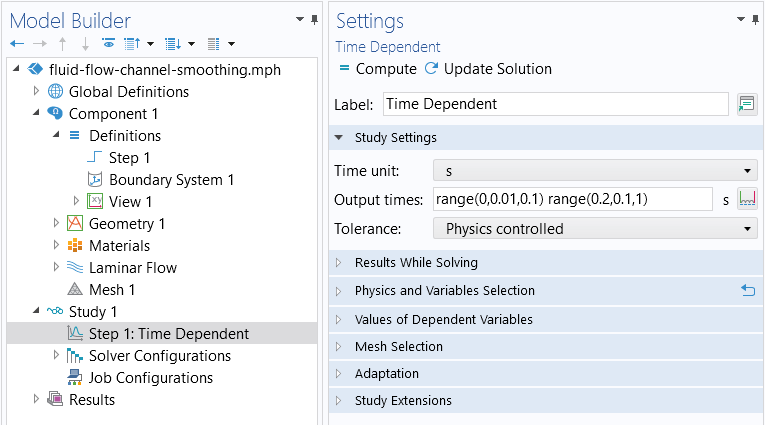 The settings for the Time Dependent study step. A short time range (from 0 to 0.1 seconds) with a smaller step size (0.01 seconds) is used where our Step function is defined and ramping up the velocity at the Inlet boundary condition in the model.

Note that not all problems will require this type of smoothing. Some problems, particularly heat transfer problems that do not involve convection, can be solved with step changes to the loads. If these step changes happen during the simulation time span, you should use the Events interface to accurately model these cases, as described here, where we discuss solving models with pulsed loads in time.

Using either of the above techniques to solve transient models with inconsistent initial values should resolve the issue of finding a consistent initialization, and you should not have to alter the study settings in your model. However, if you find that you still are encountering issues with convergence, this could be due to a few reasons: