Studying the Airflow Over a Car Using an Ahmed Body

As the burning of fossil fuels becomes a more pressing issue, manufacturers are introducing more fuel efficient cars to the market. One main contributor to fuel burn is the car’s aerodynamic drag. Complexly shaped, cars are very challenging to model and it’s difficult to quantify the aerodynamic drag computationally. The Ahmed body is a benchmark model widely used in the automotive industry for validating simulation tools. The Ahmed body shape is simple enough to model, while maintaining car-like geometry features.

Why Study the Drag Coefficient in Cars?

There are certain ways to modify a car to optimize its aerodynamics and decrease the drag coefficient. To streamline the exterior, you can remove certain aftermarket items such as the roof rack, mud flaps, spoilers, and radio antenna. Professional car racers also take off their windshield wipers and side mirrors, but this isn’t recommended for the average driver! You can also add wheel covers, a partial grille block, an under tray, fender skirts, and a modified front bumper to improve the drag coefficient and make your car stand out in the process.

What Is an Ahmed Body?

The Ahmed Body was first created by S.R. Ahmed in his research “Some Salient Features of the Time-Averaged Ground Vehicle Wake” in 1984. Since then, it has become a benchmark for aerodynamic simulation tools. The simple geometrical shape has a length of 1.044 meters, height of 0.288 meters, and a width of 0.389 meters. It also has 0.5-meter cylindrical legs attached to the bottom of the body and the rear surface has a slant that falls off at 40 degrees. 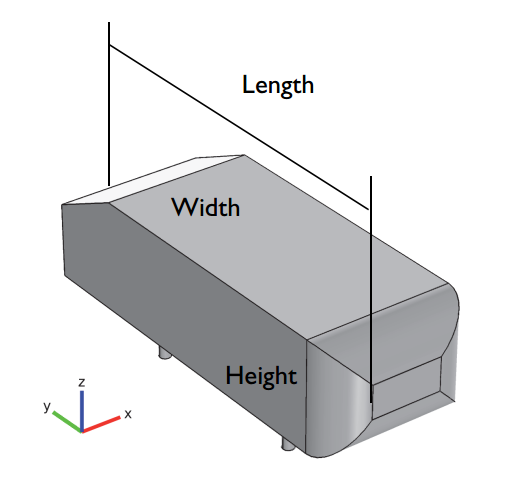 The simple geometry of an Ahmed body.

Modeling Airflow Over an Ahmed Body

In the Airflow Over an Ahmed Body verification model, our Ahmed body has a 25-degree slant and is placed in the following domain, measuring 8.352-by-2.088-by-2.088 meters, to compute the flow field. 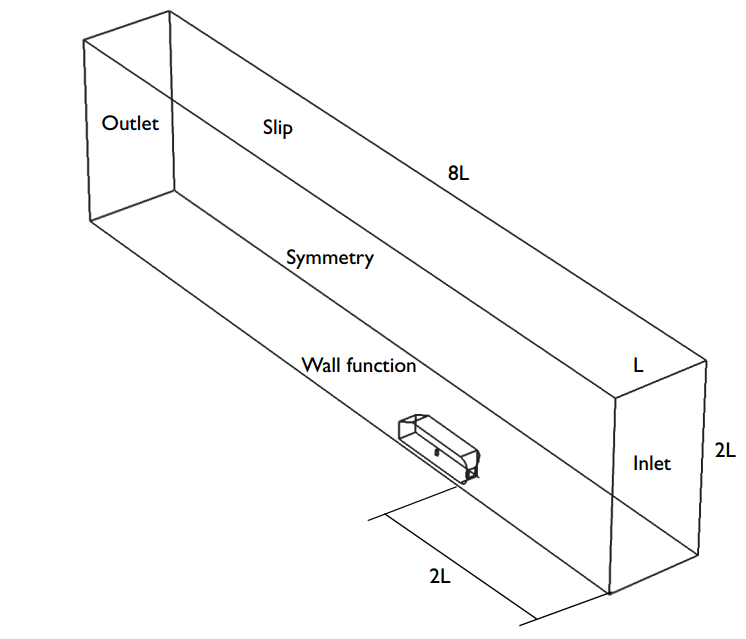 Computational domain and boundary conditions for the fluid flow simulation.

The front of the body is placed at a distance of 2 car lengths (2L) from the flow inlet. To reduce the computational cost, a symmetry plane is introduced to model half of the model.

The flow for this model is turbulent, which is based on the Reynolds number determined by the body length and inlet velocity. The simulation solves for the turbulent kinetic energy in addition to the velocity field. For this simulation, we need a larger mesh size than what is usually common to resolve the turbulent flow. More specifically, we use a finer mesh downstream of the model to capture the wake zone.

The flow for this model is turbulent, which is based on the Reynolds number determined by the body length and inlet velocity. The simulation solves for the turbulent kinetic energy and dissipation in addition to the velocity and pressure fields.

The total drag coefficient of the Ahmed body is the key measurement for this simulation. It is made up of measurements for the pressure coefficients in the front, slant, and base of the body as well as the body’s skin friction. In the results of our simulation, the total drag is very well predicted but the individual measurements deviate from the experimental results in varying amounts.

A few different factors cause these deviations in data. For the front and roof of the body, wall functions used in the simulation aren’t effective at predicting the flow transitions observed in the experiments.

In terms of deviations in the slant coefficient data, we see the flow along the slant shown by streamlines in the figure below. The thickness of these streamlines is determined by turbulent kinetic energy. 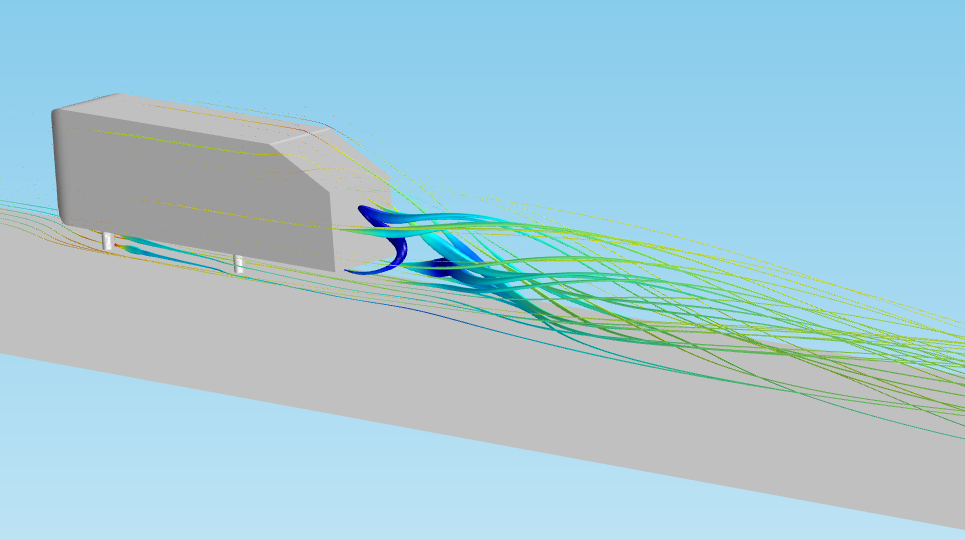 Streamlines behind the Ahmed body have thickness proportional to their turbulent kinetic energy.

In the experimental data, these lines show that the flow along the slant is attached almost everywhere and that there are two small recirculation zones behind the base. In the simulation results, this effect is captured but the extent of the recirculation zones is over-predicted.

Streamlines showing the recirculation zones past the Ahmed body.

The pressure drag for the slant coefficient is very sensitive to the exact shape and location of the recirculation regions, which accounts for the deviation in measurements.

Although the data has quantitative differences, it is qualitatively equal to experimental results because the total drag coefficients are so close. There may be deviating details in the smaller data but the simulation still captures the major features of the flow over an Ahmed body. This simulation is more than adequate for calculating the overall drag coefficient.

Get the “Airflow Over an Ahmed Body” Verification Model

Mercedes-Benz and C-Class are registered trademarks of Daimler AG Corporation.