Calculating the Spectral Properties of an Optical Ring Resonator

If you ever visit the extravagant dome within St. Paul’s Cathedral in London, be careful what you say. As Lord Rayleigh discovered circa 1878, the vaulted structure exhibits an interesting acoustics phenomenon: Whispers from one part of the dome can be clearly heard in other areas. Rayleigh called the effect a “whispering gallery”. Surprisingly, you can observe a similar effect in another field of science entirely: light waves traveling in an optical ring resonator.

What Is an Optical Ring Resonator?

The waveguide cores are placed close together and light waves are coupled from one waveguide to the other. 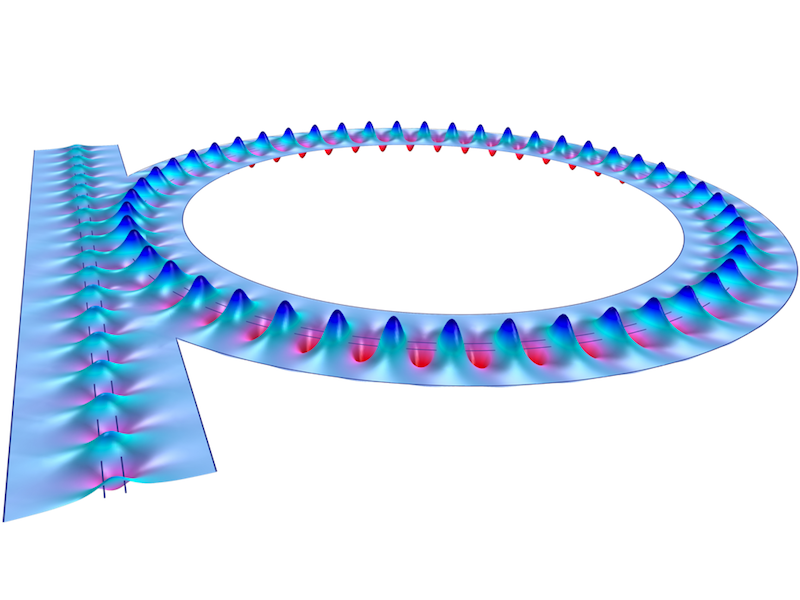 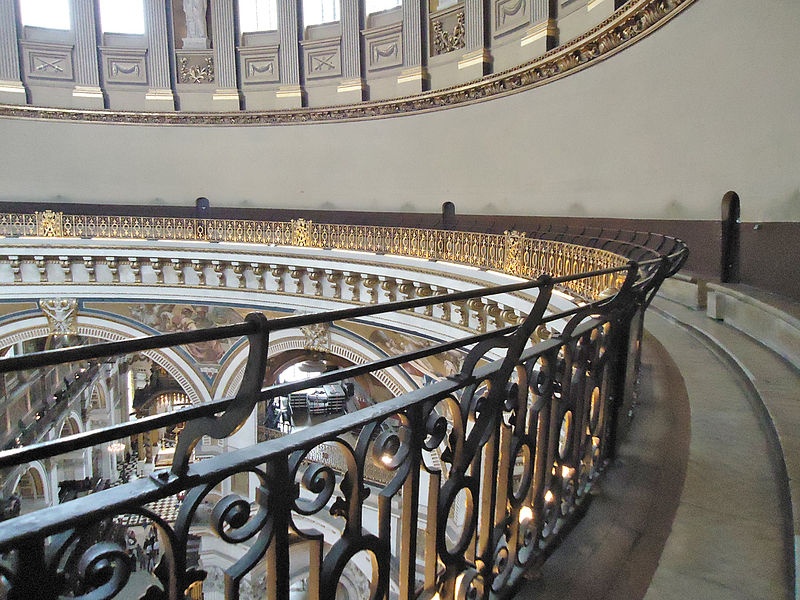 An optical ring resonator (left) exhibits an effect similar to that of a whispering gallery (right), but with light waves instead of sound. Right: The whispering gallery at St. Paul’s Cathedral in London. Image by Femtoquake — Own work. Licensed under CC BY-SA 3.0, via Wikimedia Commons.

In the field of silicon photonics, optical ring resonators show potential as components for photonic integrated circuits. Due to the resonators’ high refractive index contrast, extremely small circuits can be produced. In addition, two or more optical ring resonators can be combined to develop high-order optical filters with compact size, minimal losses, and easy integration into existing networks. Other applications of optical ring resonators include tunable mechanical sensors, biosensors and spectroscopy, as well as quantum photon research.

In an optical ring resonator, light propagates around the loop and remains in the waveguides because of total internal reflection (TIR), a phenomenon in which light rays do not refract through the boundary of the medium they strike.

Since only a few wavelengths reach resonance within these loops, optical ring resonators are used as filters. The transmission loss of the resonator’s coupler balances the loss for the propagating wave, which is ideal for notch filters especially.

Simulating an Optical Ring Resonator in the COMSOL® Software

Wave optics modeling software is helpful for evaluating the spectral properties of optical ring resonators. For example, you can use the COMSOL Multiphysics® software and the add-on Wave Optics Module, which includes the predefined Electromagnetic Waves, Beam Envelopes interface. This interface is used to model optical wave propagation over many wavelengths and the results can help you evaluate the performance of an optical ring resonator as a notch filter.

The Electromagnetic Waves, Beam Envelopes interface is based on the beam envelope method, a numerical method used to analyze the slowly varying electric field envelope for an optically large simulation. When compared to traditional optical analysis methods, the beam envelope method doesn’t require a fine mesh to resolve the propagating waves. This makes it a computationally efficient option. 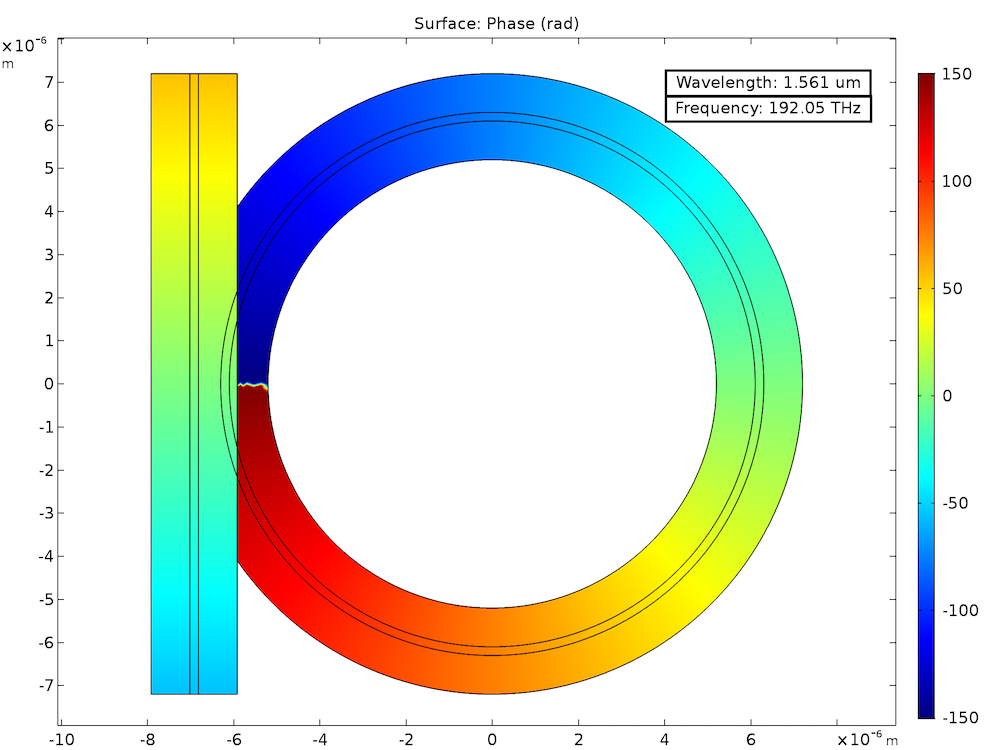 An optical ring resonator with a phase jump at the boundary between both waveguides (y = 0). 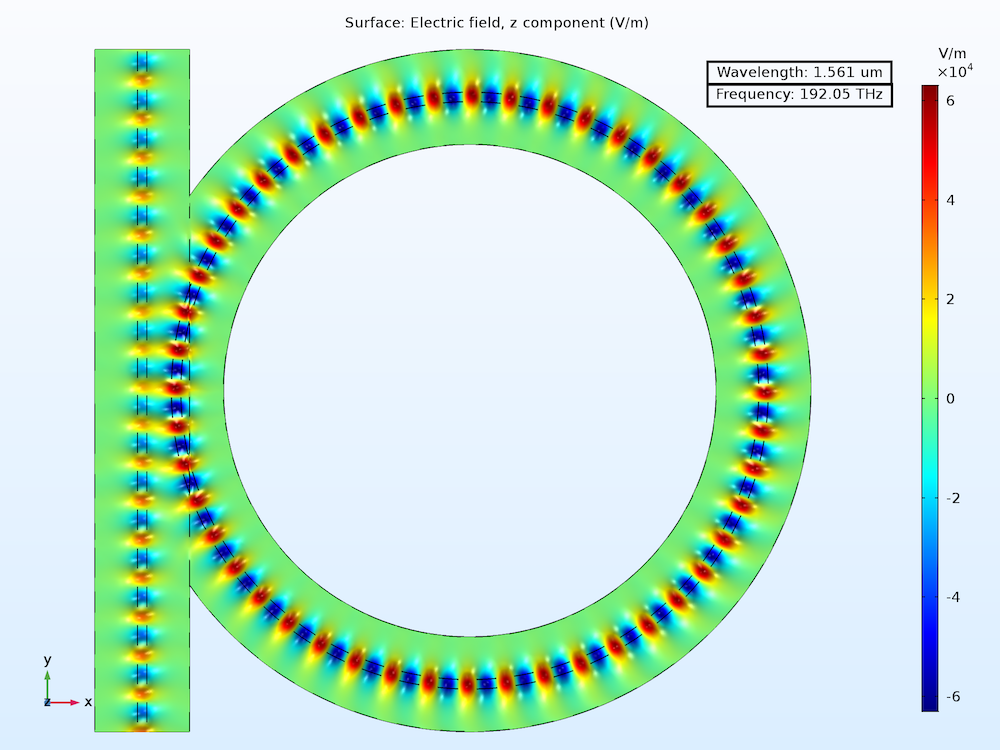 You could test the parameters of the model to design an improved optical ring resonator that completely blocks light at the resonant wavelength — perhaps even by building an app to efficiently run multiple analyses.

Check out these related resources:

It is really a good thing. Can you please help me how to work on add-drop ring (even more than one ring) resonator with COMSOL ? I really need this.

I’ve already done reading your blog post and it’s really a good read ! I’m able to learn much more now on the fundamental concept of the Optical Microring Resonator but somehow would you suggest me something (either webinar or forum post) regarding the 3D design implementation of the OMR?

We have a few technical papers and presentations on OMRs: https://www.comsol.com/search/?s=microring

Thanks for the useful blog!

Based on what I understood from the wave optics module, beam envelope is for frequency domain analysis. But for ring, one needs to see the response over a spectrum which I guess should use time dependent interface?

Please refer to the PDF documentation for the tutorial for more information, as well as support@comsol.com for any further assistance.

I am trying to run the comsol program after increasing the dimensions of the ring resonator. But mostly I am getting a flat curve with no peaks and sometimes getting transmission greater than 1 which is not possible as it shall be normalized. I am very curious to know why this is happening?