Equation-Based Modeling, a Custom Model of a Beating Heart

Equation-based modeling is one of the great strengths of COMSOL Multiphysics. The ability for you to easily access the equations describing the physics you are working with, and adding or manipulating them as you see fit, dramatically opens up the realm of possibilities that you can achieve through modeling and simulation. This is exemplified by the following custom model of a beating heart.

The heart is a central part of a unique biological system where a complex series of chemical, electrical, and mechanical events create and regulate the familiar rhythmic heartbeat. Simulation of the electrical activity in cardiac tissue can, in particular, lead to a greater understanding of the underlying mechanisms involved in both the normally and abnormally functioning heart.

The sinoatrial (SA) node initiates the propagation of the rhythmic electrical signals that coordinate the contraction of each of the four chambers within the heart. The electrical signal starts at the SA node, passes through the atria to the atrioventricular (AV) node, and then finally through the Purkinje fibers to the ventricles. This process repeats 60-100 times per minute in a normally functioning heart. At the end of each cycle, the electrical signal is naturally damped. Improper functioning of the SA node or signal re-entry due to an underlying heart condition can produce an irregular heartbeat referred to as an arrhythmia.

Simulating the Electrical Signals in a Heart

There aren’t very many software products for simulation out there that are specifically designed for modeling the complex processes of a beating heart — even COMSOL Multiphysics doesn’t have a “Heart Module”. However, researchers from the Università Campus Biomedico di Roma, Italy developed a model of the electrical signal propagation in a heart using COMSOL Multiphysics with equation-based modeling.

Cardiac tissue is comprised of a network of cardiomyocytes, a highly differentiated cell type that allows for the propagation of electrical signals throughout the heart. The electrical signal is actually an ionic current that diffuses between neighboring cells through small pores called voltage-gated ion channels in the cellular membrane. The membrane potential must exceed a threshold voltage for the gates to open (excited state), otherwise they remain closed (rest state), and the electrical signal is not able to propagate. For purposes of simulation, cardiac tissue can be classified as excitable media, indicating that its cellular constituents exhibit:

Accordingly, the FitzHugh-Nagumo equations for excitable media were implemented by the researchers, through equation-based modeling, to simulate the electrical signal propagation in a heart. In order to add custom physics to their model, the researchers defined two partial differential equations (PDE) via the PDE user interface. The equations are defined as:

and contain two dependent variables that represent the activation (u1) and inhibition (u2) of electrical signal propagation in the model. COMSOL Multiphysics does not have a readily available interface specifically for the FitzHugh-Nagumo equations, however, the PDE interface includes a simple template for adding them, as shown in the figure below. In this example, a General Form PDE is selected from the PDE interface menu.

Next you can see a screenshot of a graphical user interface from COMSOL Multiphysics, with the template open for a general form PDE. In this case, the equations to model the electrical signal propagation in a beating heart have been entered. 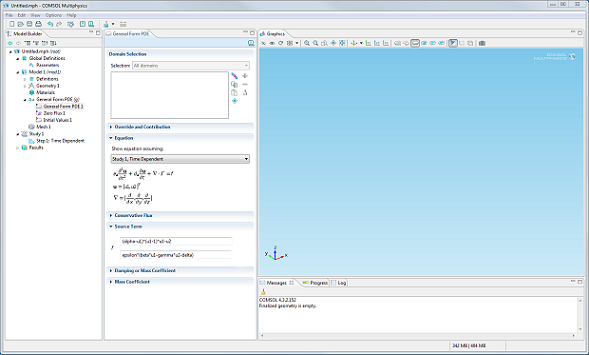 The FitzHugh-Nagumo equations are entered in the Source Term fields in the General Form PDE template:

The researchers from Università Campus Biomedico di Roma simply had to type “(alpha-u1)*(u1-1)*u1-u2” and “epsilon*(beta*u1-gamma*u2-delta)” into the two fields for the source terms to set them up. The equations were solved for a simplified geometry of the heart, comprised of two chambers represented by semispherical cavities. A solution to the FitzHugh-Nagumo equation for the activation potential (u1) at time t = 500 seconds is presented in the figure below, along with a schematic of the model geometry.

The parameters chosen for the model, along with the initial pulse, lead to a reentrant wave that travels around the tissue in a spiral pattern without damping. This is representative of a case where cardiac arrhythmias can develop.

Equation-based modeling generally includes the use of partial differential equations (PDEs), ordinary differential equations (ODEs), and algebraic equations to describe the physics that best represents your own unique system. There are four approaches available within COMSOL Multiphysics to create an equation-based model, in addition to the Physics Builder that allows you to generate your own interface that conveniently conceals the mathematics. On May 30th, we are hosting a webinar on “Equation-Based Modeling” where Bjorn Sjodin, VP of Product Management, will describe the power and flexibility in developing your own custom models without the need for user-written subroutines. The webinar includes a demonstration of equation-based modeling applied to custom materials definitions, phase change, and time-dependent loads and sources. If you’re interested in equation-based modeling, I recommend that you join us for the webinar.

You can view the model in the Model Gallery: http://www.comsol.com/model/electrical-signals-in-a-heart-981

If it is possible for acoustics model as same. how can I model builded.

When I enter the first equation in the source term, it gives me a warning stating inconsistent unit. How do I solve that?

You can suppress this warning message by turning off unit support in the settings window that is shown when you click on the model’s root node.

When you log into your COMSOL Access account, you can access the documentation for the model referred to in this post by going to: http://www.comsol.com/model/electrical-signals-in-a-heart-981 . The associated pdf document contains all the modeling steps. On page 8, you’ll find specific instructions on how to turn off unit support and avoid the warning message.

I hope this helps…just let me know if you have any further questions.

Hi I’m built in Comsol RF ablation for hepatic tissue. I use bioheat and Laplace equations. I need to include vaporization of tissue. Maybe someone know any standart equation in Comsol?