The phrase “well-oiled machine” is often used to describe a smooth-running operation, and with good reason: Introducing lubrication (like oil) between contacting bodies in systems helps ease movement and reduce wear. However, adding a lubricant changes the mechanism behavior, which brings new challenges to the engineers. Experts at SIMTEC designed a lubricated mechanical contact using numerical modeling to quickly predict the behavior of a bearing within a system. They also built an application for optimizing the use of lubrication in designs.

The study of interactive surfaces when they are in relative motion is called tribology. This field of study is fundamental to many systems, whether they are mechanical, electromechanical, or even biological. Tribologists study the multiphysics components of friction, such as the wear, heat transfer, and lubrication of interacting surfaces.

Experiments in this field can be traced back to Leonardo da Vinci, who is considered (among many other roles based on his artistic and scientific contributions) the “father of tribology” for developing two laws of friction. 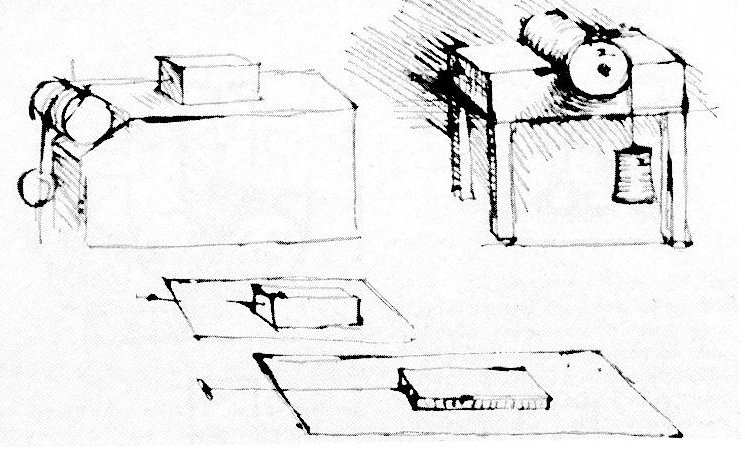 A classic tribology example of a machine component that minimizes friction between two moving parts is a bearing. Both sliding and rolling element bearings act as a barrier between materials. Sliding bearings facilitate movement in a sliding motion, and rolling bearings facilitate movement in a rolling motion. Jean-David Wheeler and Vincent Bruyère, simulation experts at SIMTEC, a COMSOL Certified Consultant, explain: “In sliding and rolling bearings, the aim is to allow the velocity accommodation between two moving bodies with minimum friction and minimum wear.”

There are many complex multiphysics phenomena involved in bearings and their movement. In a rolling bearing, for example, issues can arise with the sliding contacts between the cage and rolling elements, namely because they contribute to power losses. Other issues with this setup: The load is not purely radial and the geometry where the roller and flange meet can vary. As Wheeler and Bruyère note: “If a bearing is not well designed for its application, it can be severely damaged and even destroyed, leading to the whole mechanism failure.”

Introducing lubrication is mandatory with such issues. A lubricant material is typically placed in the bearing and will spread itself between the two contacting surfaces, usually in the form of a film, so that the materials avoid direct contact with each other. However, while Wheeler and Bruyère say that introducing oil and grease in contacts is often key, “accurate friction and wear predictions are difficult to obtain.” Why is the lubricant behavior so hard to predict, and how can it be accounted for in designs? An example of a bearing from a bicycle that failed prematurely, in part due to lubrication issues. Image by Ben pcc — Own work and in the public domain via Wikimedia Commons.

Environmental factors like climate and weather contribute to the unpredictable behavior of lubricants, as well as thermal factors within the system and energy dissipation. The process of adding the lubricant can also cause issues: If the oil is fed in too harshly, for example, there is a reduction in film thickness, which causes premature wear. This surface damage can lead to the jamming of the bearing. And some contacts, like a flange roller-end critical contact in a roller bearing, can be harder to feed with oil and can generate high power losses. In addition, the exact location of the contact often moves to the sides rather than the middle, leading to contact truncation. This power loss converts to heat generation, changes lubricant properties, and reduces film thickness.

In general, lubricant and motion ultimately lead to elastohydrodynamic lubrication (EHL), which involves fluid flow, solid mechanics, and thermal effects due to fluid compression and shear-generated heat. EHL phenomena are also multiscale in the sense that the solids are on a centimeter/decimeter scale, the contact surface is at a millimeter scale, and the film thickness is at a micro-/nanometer scale. These problems may become even more complex when velocity fields and the shapes of the contacting bodies are unusual (as in the flange roller-end contact). Under pressure, the lubricant flows away from the contact. This same pressure increases the oil viscosity and decreases the flows at higher pressures. The piezoviscous fluid is dragged between the surfaces, and this EHL phenomenon can ultimately cause the lubricant film to separate the surfaces.

That’s why it’s important to be able to predict lubricant behavior early on in the design process. According to the SIMTEC team, modeling the contact behavior helps to build reliable systems. “Simulation can also help to better understand failure modes after they have happened by reproducing the working conditions of the bearing,” say Wheeler and Bruyère. This helps them gain insight into the mechanism and often enables them to better identify the problem.

To deal with these unpredictable behaviors, SIMTEC created a numerical model and a simulation application using the COMSOL Multiphysics® software. 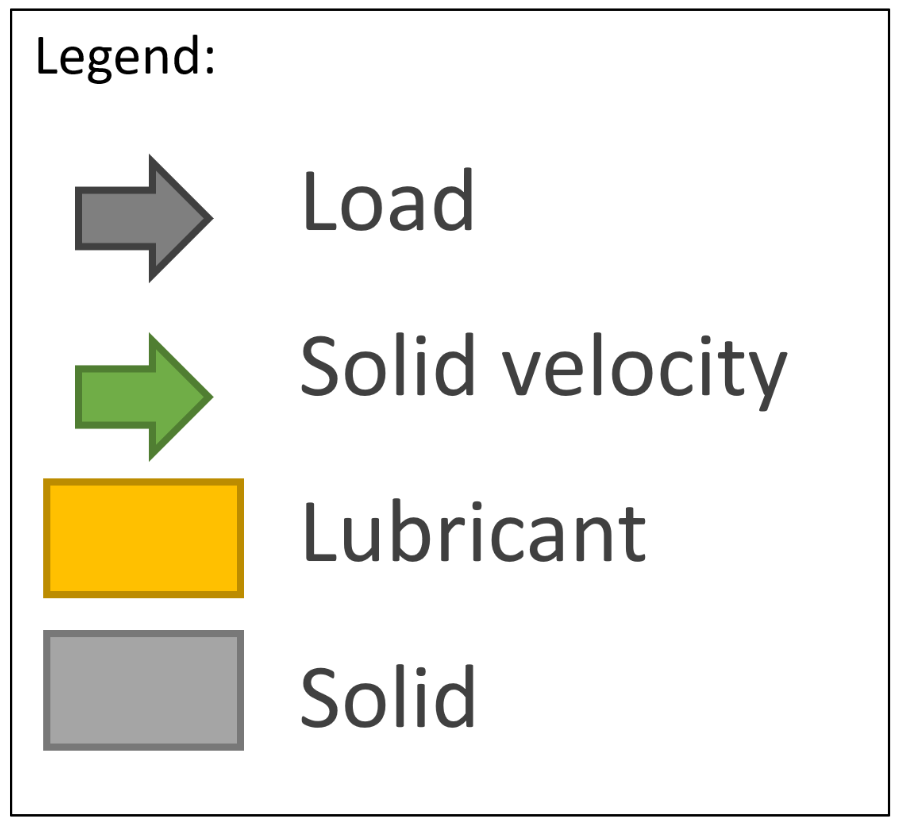 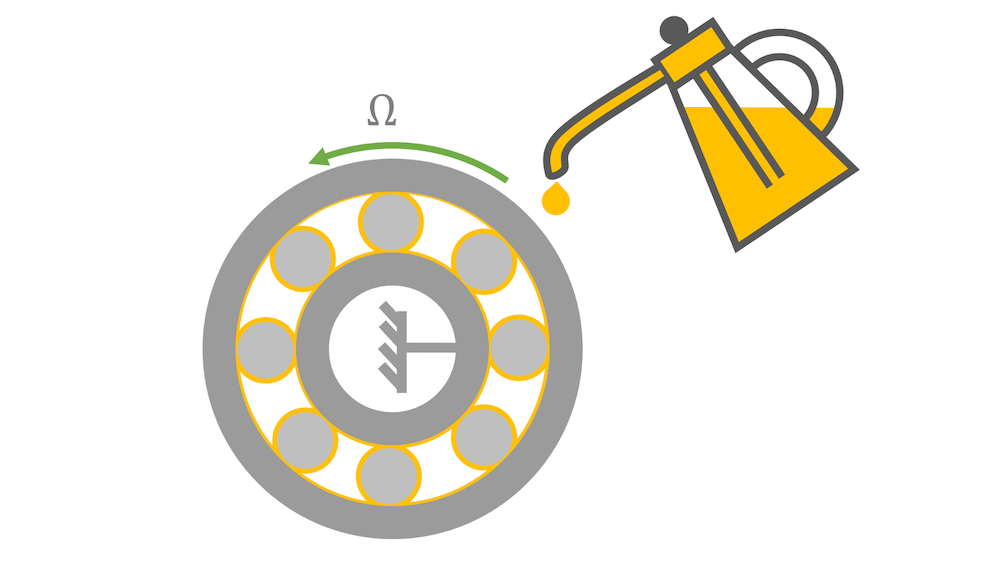 Computational tribology combined with experiments is best for studying the behavior of lubricated contacts due to the complex multiphysics behavior going on between the contacts. Engineers must be able to predict both the friction and thickness of the film from the start. To save time and money, SIMTEC created a finite element model of a sliding bearing with a lubricated mechanical contact pad. These components are commonly found in industrial machinery.

“COMSOL Multiphysics really is the ideal tool for us within SIMTEC,” the team says. “As COMSOL Certified Consultants, our main mission is to introduce laboratory research results in numerical models for the industry. Therefore, we have high expectations from our FEM software. Indeed, it must be flexible enough to implement nonstandard research features, but it must also be easy to use and efficient to meet the engineering requirements.”

To set up the complex numerical model that requires simulation knowledge as well as expertise in tribology, the SIMTEC team first defined the sliding bearing geometry by its length, thickness, and wedge, with the lubricant placed between the two solids. The top solid is static (ut = 0 m/s), while the bottom solid slides at the velocity ub. A load (w) is applied to the top solid, generating hydrodynamic pressure in the lubricant that transmits to the bottom solid. The flow of the lubricant distributes the pressure in the convergent shape of the top solid so that the mean pressure under the solid becomes w/(width * length).

The team factored in various conditions that are common in industrial machinery. These conditions need to be considered in order to predict the influences that contribute to film thickness and friction. Such effects include the geometry and linear deformation of the solids, heat dissipation, and the thin film itself.

The governing equations required to cover these phenomena involve: 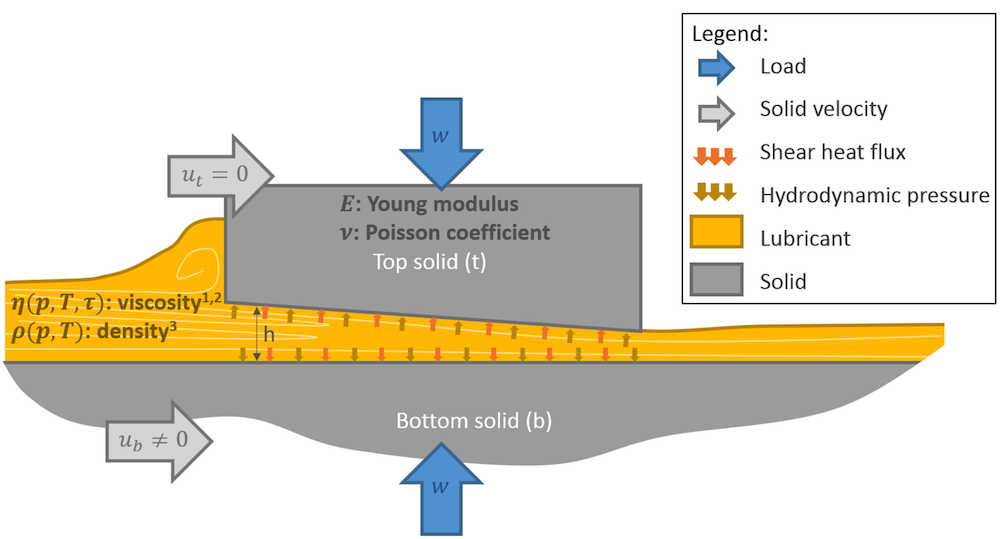 A schematic of the sliding bearing. Image courtesy SIMTEC.

This numerical model and simulation application the SIMTEC experts created involve complex math and science, but they did their best to make it accessible to users who do not have a deep background in tribology.

Through numerical modeling, the SIMTEC team was able to verify the results from their model and compare them to published literature. In addition, they were able to run simulations for common problems that arise under various working conditions to predict and address friction and wear for the contact, overall bearing, and system. This is useful for understanding tribology applications in a variety of fields. As the team mentions, there are often tribology issues in journal bearings, tires, gears, artificial hip joints, breaks, engines, and more.

As a validation case, the team studied the simple isothermal rigid contact with an isoviscous and incompressible Newtonian lubricant. As shown in the plot below, the results are in good agreement with a reference data (analytical approach). The solid squares are the numerical results from the simulation, and the outlined circles are the reference results. Comparing the film thickness (blue) and pressure (green) between the numerical results and the reference. Image courtesy SIMTEC. 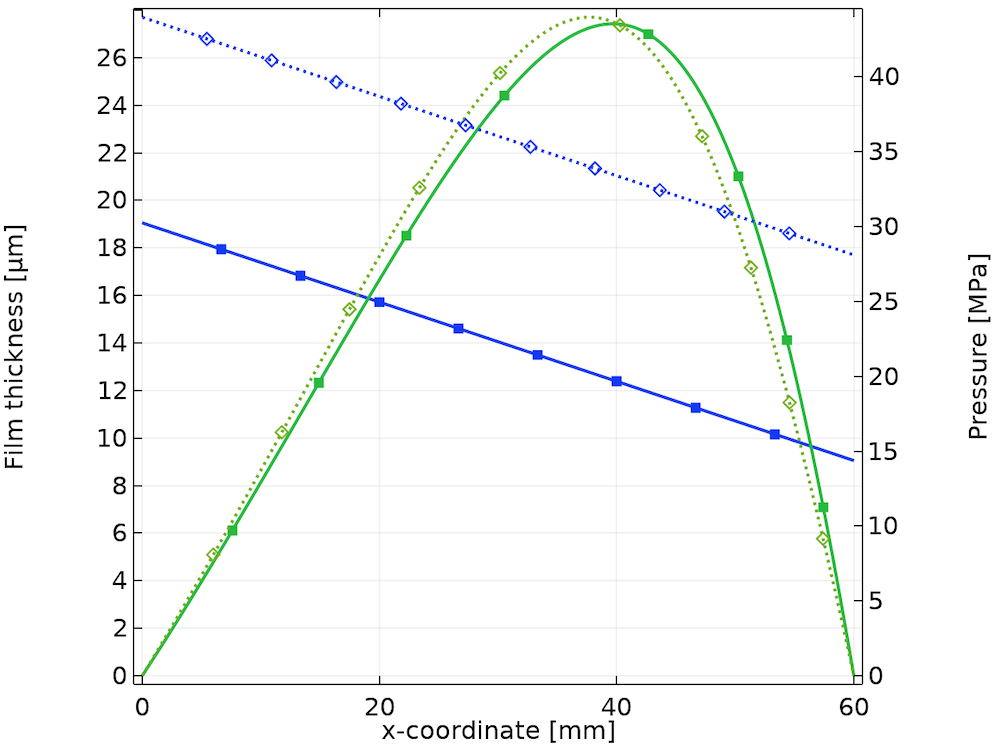 Ultimately, the results from these and similar studies for different physical phenomena helped them predict both friction and wear.

While extremely precise results require complex rheology modeling, it is fortunately realistic enough nowadays to provide quantitative predictions for realistic industrial cases via the models discussed here. The SIMTEC team was able to predict a rise in friction due to the shear rate increase followed by a drop due to thermal and non-Newtonian effects, as shown in the plot below. The physically expected behavior is obtained for the sliding bearing friction. As for the wear, the results help determine what the required operating conditions would be for the sliding bearing. This sliding bearing needs to operate at ub ≥ 1 m/s to be effective. To easily solve the involved equations and make the simulations accessible to customers, SIMTEC created an application with a user-friendly interface so that application users can analyze the lubricated pad’s behavior under a number of conditions and parameters. They built a demo application so that anyone interested can see how easy it is to run analyses for themselves.

“Our sliding bearing demo application is dedicated to the modeling of a sliding bearing,” says the SIMTEC team. “Various geometries, working conditions, and lubricants can be defined under basic and advanced assumptions. On the demo application, all of the parameters can be triggered, but only a few can be selected at the same time. Of course, there are no such limitations on the full application.” 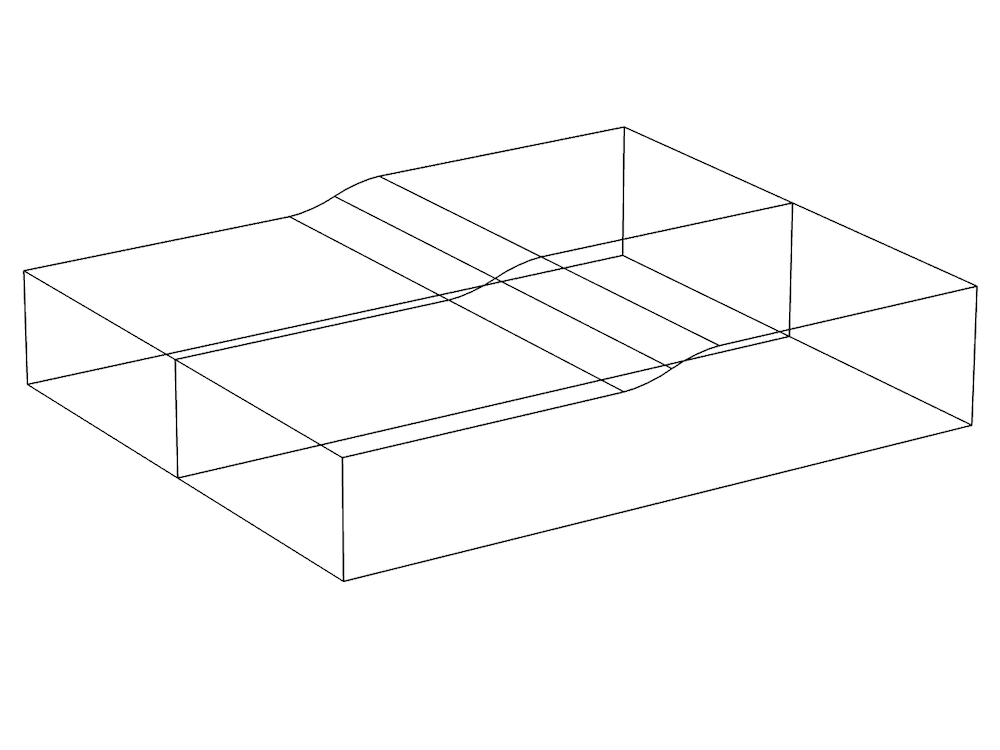 The application can model a geometry, like this one, of the lubricated pad. Image courtesy SIMTEC.

SIMTEC can also provide an adapted version of the application that is tailored to your needs.