Carousel horses, fireworks, and playground equipment are just a few of the products highlighted in the documentary show How It’s Made. One particular episode features how golf balls are made. It’s a mesmerizing process involving rubber sheets, steel drums, a compression mold machine, and more. After watching this clip, I was inspired to learn more about golf ball technology. In today’s blog post, we’ll explore the evolution of the golf ball and the role of simulation in the future of golf ball design.

The Evolution of the Golf Ball

Every year, about 1.2 billion golf balls are manufactured worldwide. They come in a variety of styles and designs, including: 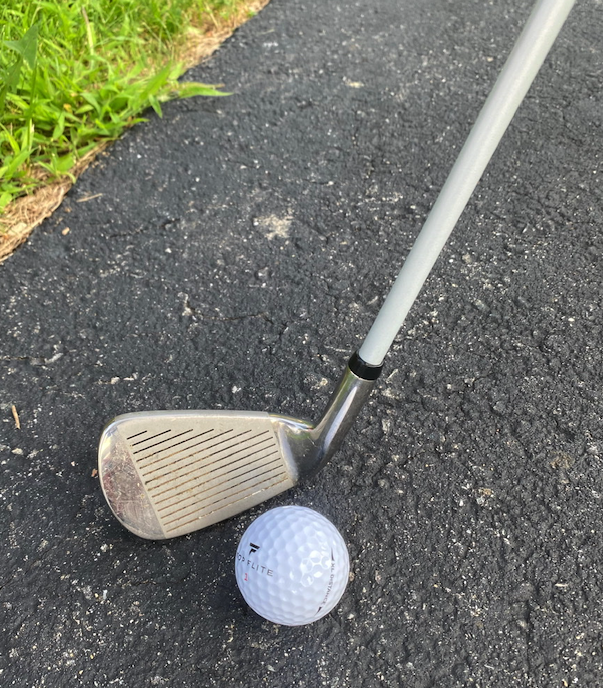 Although they differ in many ways, the five main types of golf balls have something in common: dimples covering their round surface. However, this wasn’t always the case. The golf ball, as we know it today, has gone through many design changes. Let’s briefly explore the five distinct stages in the evolution of the golf ball.

It is widely accepted that the modern game of golf originated in the 15th century in Scotland. However, there is a lot of debate over what the first golf balls were made out of. Many accounts say that they were carved out of hardwoods, like beech and box trees, while others are less convinced, as there is little evidence to support this theory.

Whether or not the first golf balls were made of hardwood, one thing is certain: Wooden golf balls would make for a subpar game of golf. They would have a mediocre flight ability, mainly due to their weight.

Next came the hairy. This type of ball was originally made in the Netherlands and imported to Scotland. It was made out of a round, leather shell that was filled with either cow hair or straw. Due to its affordable price, it remained a popular choice of golf ball for more than 300 years.

The featherie ball was developed in the early 17th century. It was similar to the hairy, but filled with goose or chicken feathers instead of hair. To construct a featherie, a golf ball maker would stuff a wet piece of leather with wet feathers. As the feathers dried, they expanded, and as the leather dried, it shrank. This made for a golf ball that was highly compact and dense. Some accounts say it had characteristics only recently matched by modern golf balls.

The downside to featheries was that they were highly expensive. The cost of a single featherie could range from $10 to $20 USD in today’s currency. 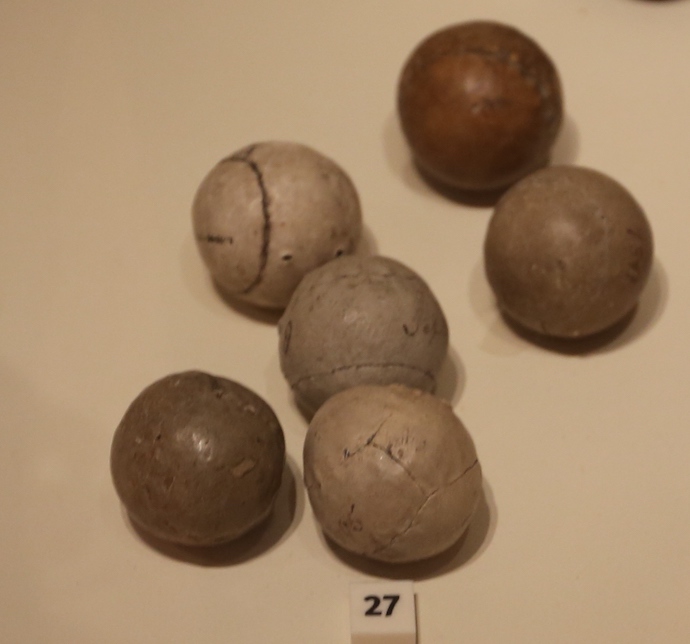 In 1848, Robert Adams Paterson developed the gutty, or gutta-percha ball, which changed the design of the golf ball forever. It took the form of a sphere made from the dried sap of a Sapodilla tree. Compared to the featherie, the gutty couldn’t fly as far, but it was a lot more affordable, allowing more people to partake in the game of golf.

When using the gutty, golfers quickly noticed something strange: The ball performed better when marked up. This finding led golf ball makers to intentionally add indents to the balls they were designing, typically in a bramble pattern (or a pattern that resembles the surface of a berry).

How did boredom lead to the next major breakthrough in golf ball design? While waiting for a friend in 1898, Coburn Haskell preoccupied his time by tying rubber thread into the shape of a ball. When he bounced it, he was taken aback by its impressive flight ability. His friend, Bertram G. Work, suggested that he add a covering to it, and thus the Haskell was born.

The early versions of the Haskell were made from a liquid or solid core, layers of rubber thread, and a cover made of balata sap. Like the gutty, they also had a bramble pattern on their surface. However, this changed when people learned that inverting the dimples gave the ball a better flight pattern. The Haskell paved the way for the golf ball as we know it today.

The Future of the Golf Ball

It’s fair to say that the golf ball has come a long way from being made of hair and feathers and sap. But the evolution of the golf ball isn’t over. Manufacturers are always researching ways to improve golf ball aerodynamics and mechanical properties.

Unlike golf ball makers of the past, engineers and designers can now use simulation to analyze the performance of golf balls of varying layers, materials, dimple quantities, sizes, and more. Let’s explore one example in today’s blog post…

Modeling the Impact of a Golf Club on a Golf Ball

As we demonstrate in the Impact Analysis of a Golf Ball tutorial model, engineers can analyze the mechanical impact of a golf club hitting a golf ball using simulation. A viscous penalty formulation can be used to model the contact between both objects, which helps stabilize the dynamic event. The simulation only looks at a time period of 2 ms, as it solely focuses on the impact of the club hitting the ball.

Click to see the Impact Analysis of a Golf Ball tutorial model in action!

The dimensions of the modeled golf club are based on a 7 iron with a 34° loft. The clubhead is about 9 cm wide, 6 cm high at the toe, and 3.5 cm high close to the shaft. The model assumes the club is made of steel and has the following properties:

The golf ball is a highly regulated piece of sports equipment. Therefore, when modeling it, we ensured our golf ball fell in line with the rules of golf established by the R&A and United States Golf Association (USGA). The modeled golf ball has a 42.67 mm diameter; is made of 3 layers (an inner core, a mantle, and a shell); and has 362 dimples on its outer surface. All parts of the ball are described with a neo–Hookean hyperelastic material model, and the inner core and mantle are also given viscoelastic properties. In its entirety, the ball weighs 45.93 g.

Below, you can view the geometry of the club and golf ball. 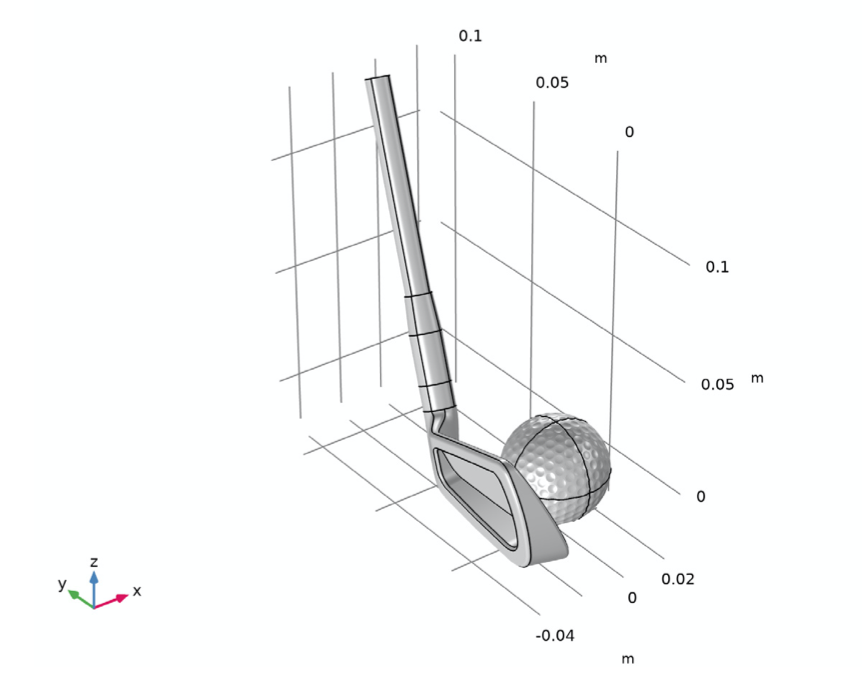 The geometry of a 7 iron and a three-piece golf ball in the tutorial model. 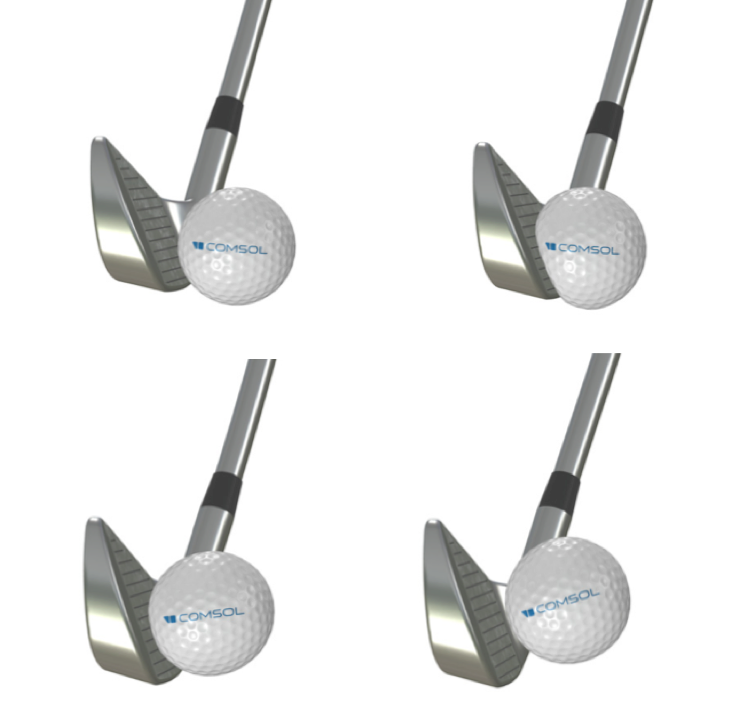 The large deformation is even more noticeable in the figure below. 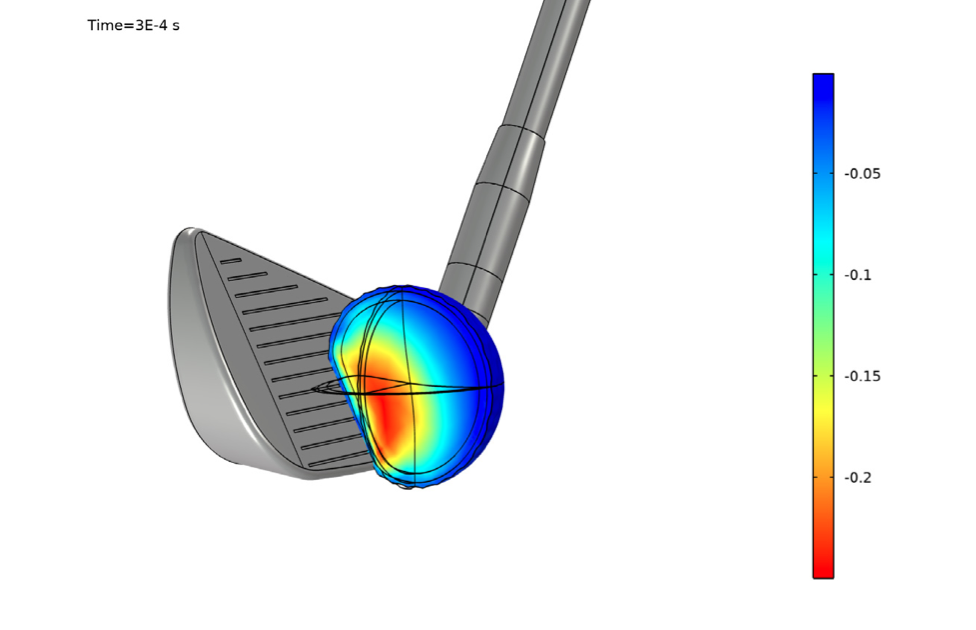 Deformation of the golf ball and distribution of the third principal (compressive) strain inside of the ball at 0.3 ms.

In the graph below, we can see the average magnitude of the velocity in the clubhead and in the golf ball during impact. This allows us to study the kinematics of the problem in detail. The velocity of the clubhead decreases during and after the impact due to the flexibility of the club’s shaft. After the impact, the initial 145 km/h (~90 mph) clubhead speed has been converted into a ball speed of 187 km/h (~116 mph). This results in a so-called smash factor of around 1.3, which is on par with the performance of a modern commercial golf ball. 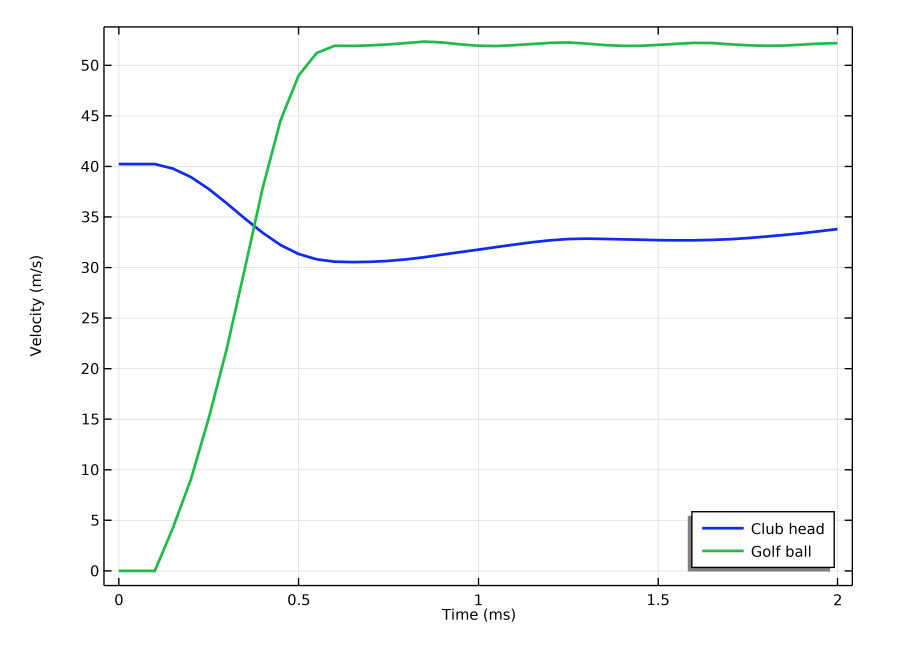 The velocity of the clubhead and ball during the simulation. 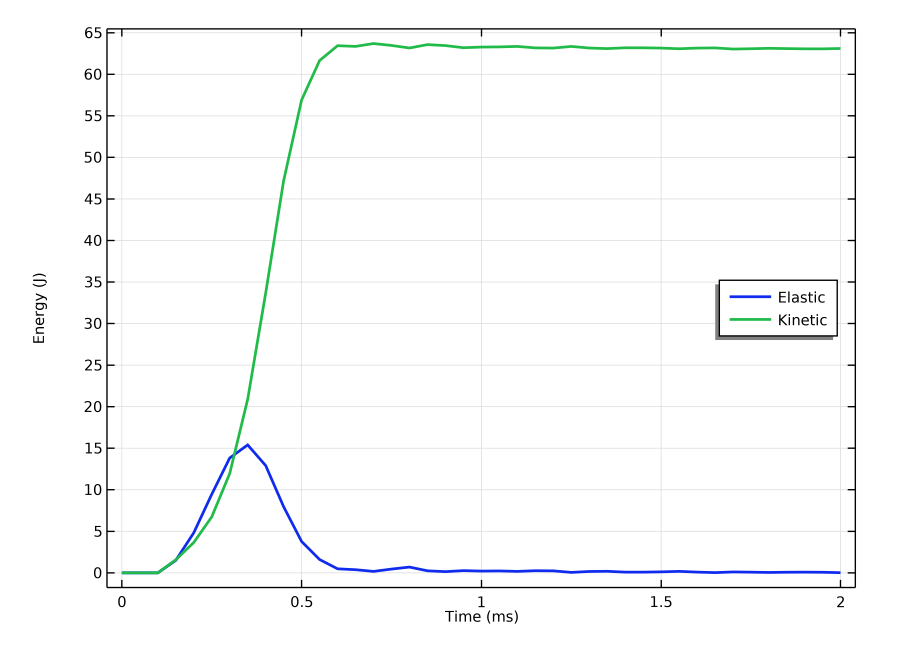 The total elastic and kinetic energy in the golf ball before, during, and after being struck by a 7 iron.

Learn how to build the model discussed here by downloading the documentation and MPH-file from the Application Gallery.

Read about more ways simulation can be used to analyze sports and sporting equipment:

Surlyn is a registered trademark of Performance Materials NA Inc.

Thank you for the explanation of this contact problem;
In the case of the impact of a ball on a plate, how to add a displacement or the load for the ball, and how to add contact between them?