Microchannels are versatile structures that can be used for thermal management. One way to optimize heat transfer within such systems is by adding a pin fin heat sink to the microchannel configuration. Applying this approach, a team of researchers created a novel pin fin design, analyzing its heat transfer efficiency with COMSOL Multiphysics. They presented their innovative work at the COMSOL Conference 2015 Boston.

As modern technology evolves, electronic devices like computers are growing smaller in size and increasingly powerful. Such advancements in power cause devices to generate more heat when in use and, when electronic components are placed in constricted spaces, the heat may become trapped. As we’ve noted previously on the blog, better thermal management is essential in electronic devices, helping to avoid problems stemming from exposure to high temperatures.

Microchannels offer one viable thermal management solution. These structures use the liquid motion of a coolant to capture and move heat outside of a system. To further increase the amount of heat removed from the system, a pin fin heat sink can be added to the configuration. The pin fin heat sink, which features pins that extend out from the base, is recognized for its powerful performance as well as its versatility in orientation.

With the design ready, the next step was to analyze the efficiency of the microchannel. For that, the researchers turned to COMSOL Multiphysics.

The focus of the simulation study was single-phase conjugate heat transfer and fluid flow within the microchannel design. The model’s geometry can be seen below. The fluid domain is colored in blue and the solid domain is in gray. 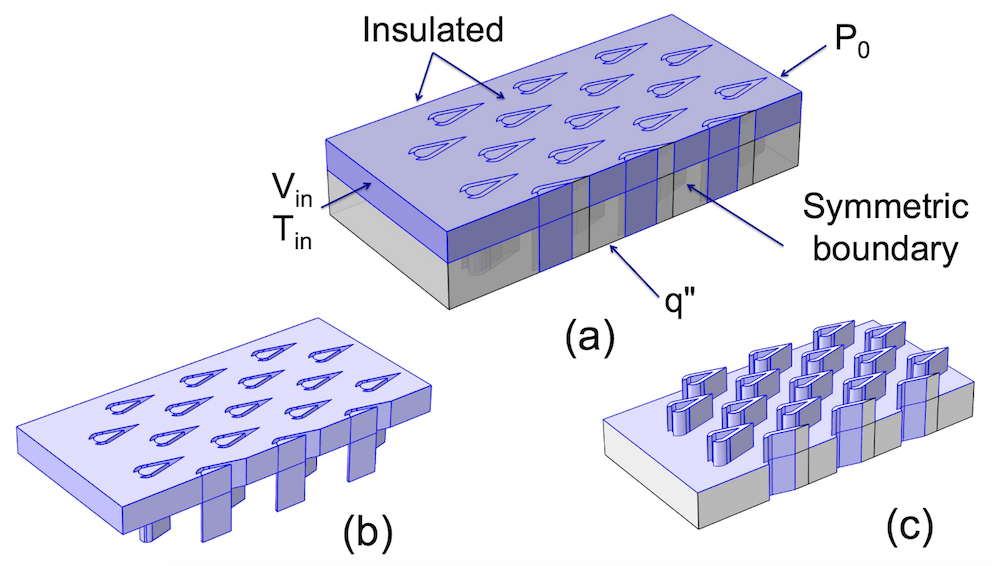 The boundary conditions (a), liquid phase (b), and solid components (c) in the PPF model. A heat flux is applied at the bottom of the model. Image by Xiangfei Yu et al. and taken from their COMSOL Conference 2015 Boston poster submission. 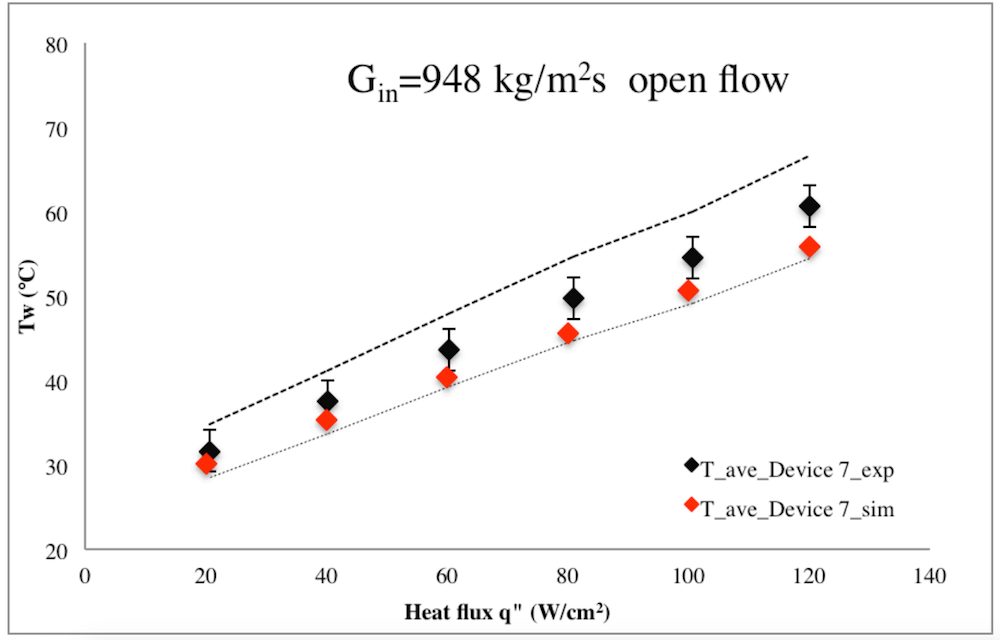 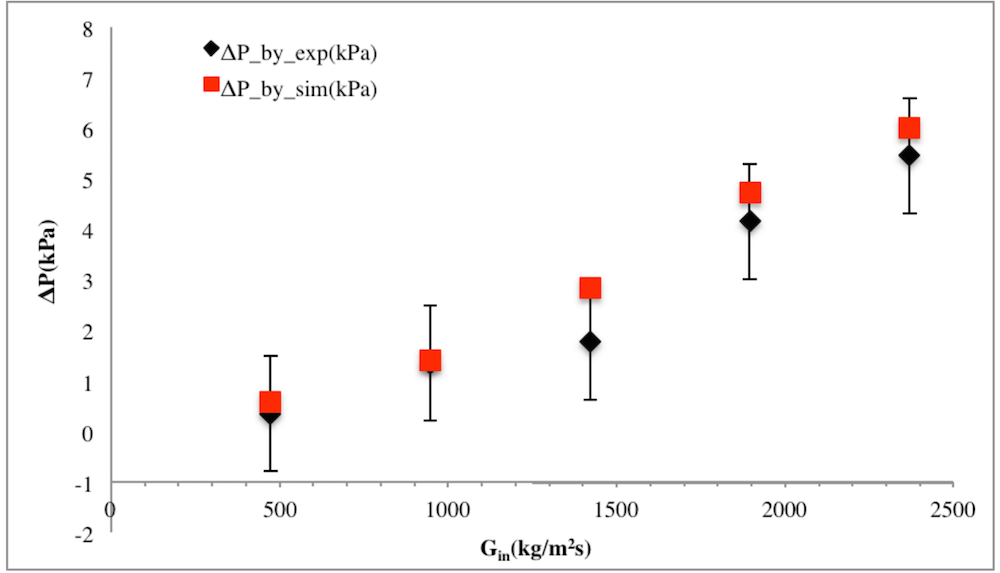 While evaluating heat and pressure drop, the team observed that the average surface temperature increases linearly with heat flux — an indication that the heat transfer coefficient rarely changes. They also found that the pressure drop increases as mass flux increases (another expected occurrence).

COMSOL Multiphysics enabled investigations of the conjugate heat transfer process, i.e., heat transfer between the solid and fluid elements in the model. As the figure below illustrates, the bottom surface temperature increases along the fluid flow direction. As such, heat is captured and moves along with the fluid. 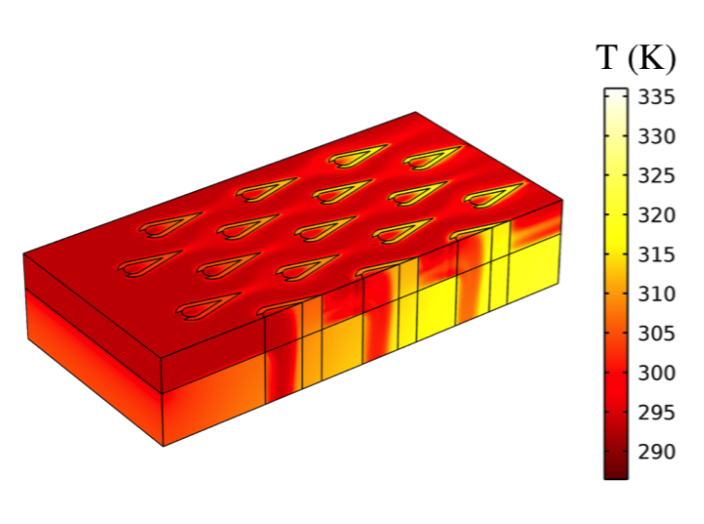 Comparing Temperatures in a PPF Array

To gain a better understanding of their design, the researchers took a more detailed look at the PPF array in the microchannel. The pin fins in the first rows were found to be cooler than those in the last rows. This is expected, as the initial rows face the oncoming cool fluid. The pin fins in the last row, meanwhile, are shadowed in a wake region and don’t interact well with the cold fluid. As a result, the PPFs in the back row reach a temperature of 330 K, 25 K higher than those in the first row.

A closer view of the individual pin fins reveals an increase in temperature from the front to the rear of the design. The heat moves horizontally along with the fluid and is transferred vertically along the pin fin. The research team’s results indicate that PPFs placed in a microchannel are able to dissipate heat, generating more efficient heat transfer.

Due to the interaction between the fluid and the pin fins, recirculation zones may form at the tails of the PPFs and potentially produce hot spots. If a cavity is formed around the spots, the pin fins can function as potential nucleation boiling sites. Furthermore, as the researchers believed, a PPF chimney could also improve the heat transfer of flow boiling operations and be used to perform vapor venting when the fluid reaches boiling temperatures.

Looking ahead, the research team hopes to continue optimizing their pin fin design and further investigate the possible applications of PPFs in flow boiling.