When you work with multiphysics all day you tend to notice physics phenomena everywhere you go. For me, one such moment was when I was walking on the beach this past summer. I noticed that the sand appears whiter around a person’s feet than elsewhere. You may have noticed this too, and like I, wondered “why?” This phenomenon can be explained by the theory of poroelasticity. 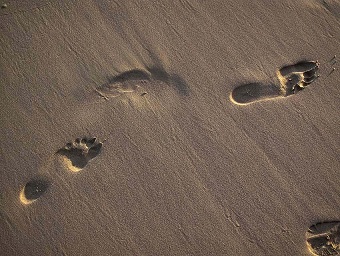 Poroelasticity is related to the geomechanics of porous and porous-like materials. These are usually associated with rocks and soils, as well as biological tissues, foams, ceramics, and paper products. A common way of experimenting with poroelasticity is by combining sand and sea water. In this case, you have a free-moving fluid in a porous-like media where an external load modifies its mechanical properties.

I wanted to try to explain poroelasticity with a computer model. When I reached out to my colleagues in applications they pointed out this great model on Biot Poroelasticity that can serve as an example to understand such a phenomenon: 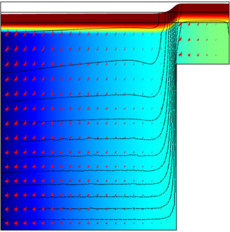 Darcy’s Law and solid mechanics are coupled in the Subsurface Flow Module to analyze the deformation of porous media resulting from fluid withdrawals. Shown in the figure are hydraulic head (surface plot) and displacement (contours and deformations). The vertical axis and deformation are exaggerated for clarity.

Poroelasticity describes the interaction between fluid motion and deformation in the porous and porous-like media. Modeling poroelasticity involves the coupling between Darcy’s law, which describes the fluid flow in porous media, and the displacement of pores under a mechanical load. More details about how to couple these two phenomena are given in the aforementioned model. That’s how a natural phenomenon can be explained using multiphysics modeling.

Going back to our beach let’s keep in mind that sand is not a sponge but a granular, dilatant, material. That means we have a particular kind of poroelasticity at work there. The pressure of our feet forces the sand’s grains to displace around them in such a way that they occupy more volume (try it yourself and you will see how the level of sand increases around your footprint). Hence, all of a sudden more space is available between the grains, especially for those that lie on the surface. Water can then occupy a larger volume, but due to capillarity its flow between the grains is slower than the velocity at which they move. This results in having a portion of the sand around our feet appear whiter and drier than the rest, as it contains less water than before. Mystery solved!

Cinzia, I really enjoyed this blog post! I too have walked on the beach and wondered about the physics behind this phenomenon. Thanks for the great post.

I am working on a poroelastic model in which I have initialized pore pressure in the entire domain (solid cylinder) under “initial values” in the Darcy’s law. On all the boundaries of this cylinder, I have applied a different pressure (which is less than the pore pressure) as the boundary condition.

I ran the transient solution for this model and the results are not as expected. For t=0, the pressure in the cylinder (slice plot) shows that the pressure is equal to the pressure applied at the boundary and not the initial value of the pore pressure.

After disabling the poroelasticity, I ran the model again (solid mechanics and Dary’s law) and then the pressure in the cylinder (slice plot) at t=0 is equal to the initialized value of the pore pressure.

I am not sure why there is a discrepancy in the result when the poroelasticity is enabled in the model.