Starting the car on a cold winter morning can be unpleasant if you have not been proactive the night before. When you are unable to start an engine, it is often the battery’s fault. Why is a battery more sensitive than other processes in a car? The answer lies in the battery’s ability to convert chemical energy into electrical energy, with a minimum of heat generation, and the relatively small amounts of thermal energy available at low temperatures.

I remember one autumn a few years ago during which I bought a new car. The following winter was one of the coldest in several years. For two weeks, the thermometer in the garden showed temperatures below -10°C (14°F).

One February morning, while on a ski vacation in the Swedish mountains, I stepped out to the cottage driveway to start the car, hoping to ensure a nice and comfortable short drive for the family on the way to the ski lift. Turning the ignition, the car barely started. The vehicle made a sound revealing that the six cylinders were not running as smoothly as usual. It took almost a minute before the engine sounded as it should. Since the car was new, I found this alarming. Very slowly, the LCD between the speedometer and the tachometer came to life, showing -35°C (-31°F). No skiing this morning!

As an electrochemical engineer, my thoughts drifted from hitting the slopes to good old lead-acid battery technology, which, at the time, was able to deliver the peak current to drive the starter and start the engine in the first short turn of the key.

This problem is not limited only to batteries — the internal combustion engine also runs into difficulties at extremely low temperatures. The lubricating oil becomes thicker, the combustion reactions become sluggish, and the condensation may freeze in critical parts of the fuel system. My car, however, did start. Any electric vehicle not plugged in during such a cold night would probably not have started at all.

What is the reason for this difference? The answer is found in the way chemical energy is converted to mechanical energy:

The process via thermal energy to mechanical energy in the internal combustion engine gives plenty of heat from the first stroke to quickly heat up the engine, allowing the car to drive off almost immediately. Yet, the slow heat generation that occurs in extreme temperatures in the electric vehicle does not provide this same experience. To quote Les Grossman, “That is physics, it’s inevitable.” 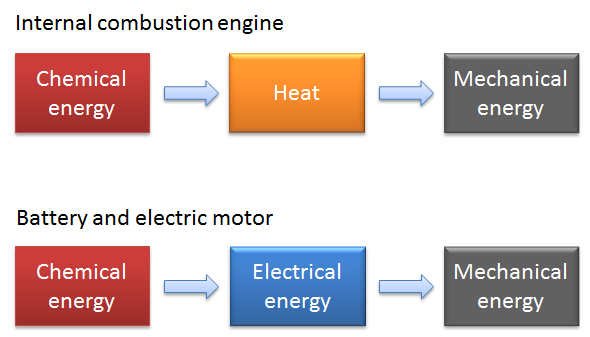 Note that the efficiency in the conversion of chemical to mechanical energy is much higher in the electric vehicle, since the losses in the battery and in the electric motor are relatively small.

Efficiency issues and heat generation aside — and before we discuss the battery — let us compare the processes that may cause difficulties in cold weather in electric and conventional cars.

Let’s begin with the electric motor and the internal combustion engine. We can imagine that the electric motor is less affected by low temperatures compared to an internal combustion engine. It has fewer moving parts and, since the moving parts are mainly separated by air gaps, it should require less lubrication and be less sensitive to low temperatures.

Finally, the electric vehicle does not require a complicated fuel system with pumps, valves, gauges, injectors, etc. This should also make it less sensitive to low temperatures compared to a conventional car, with less components to be impeded by ice build-up.

As expected, it is the battery that performs poorly at low temperatures. In fact, the impact of low temperatures on the operation of batteries can be observed in a variety of applications, from military equipment and space applications to cell phones and house alarm keypads. This component is obviously less critical in an internal combustion engine, which only needs a short peak current to start the engine. Compare this to an electric vehicle that needs a continuous current supply. Let us therefore look more closely at the battery performance and how it is influenced by temperature.

Temperature-Dependent Properties of a Battery

The two electrodes are separated by an electrolyte. In addition, both porous electrodes incorporate pore electrolyte in the void between the solid electrode material particles. The figure below shows the discharge process in a battery, with the particle size strongly exaggerated. 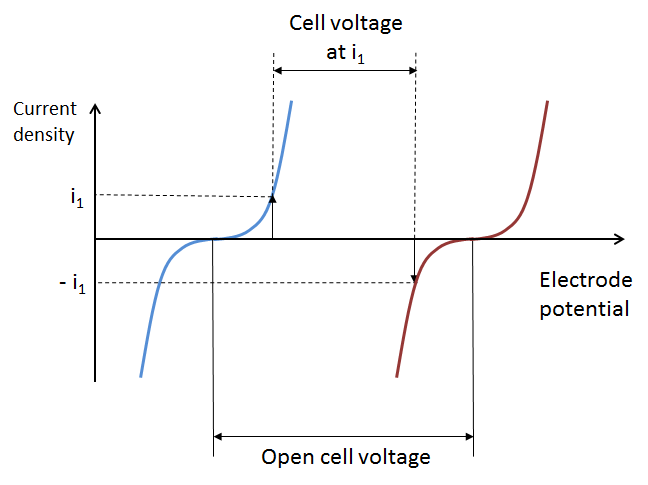 The cell potential decreases compared to the open cell voltage (see below) because of activation losses (due to electrochemical reaction kinetics), mass transport losses, and ohmic losses. Note that the cathodic current at the positive electrode is defined as negative, while the anodic current at the negative electrode is defined as positive. This is because the polarity of the electrolyte inside the battery is opposite to that of the external circuit.

The difference in electrode potential at zero current density is called the open cell voltage at a given state-of-charge, as shown by the previous figure.

The open cell voltage for a battery as a function of temperature at a given state-of-charge is calculated by the following expression:

Most lithium-ion batteries used in modern electric vehicles have a slightly negative or a very small entropy change, which means that the open cell voltage increases slightly as temperature decreases. This alone would actually improve performance at lower temperatures. However, the change in open cell voltage as a function of temperature is relatively small compared to other parameters, around 0-0.4 mV/K — that is less than 30 mV over a range of very cold temperatures (-35°C, -31°F) to room temperature. We can therefore rule out the net discharge reaction thermodynamics as a reason for poor performance at low temperatures. 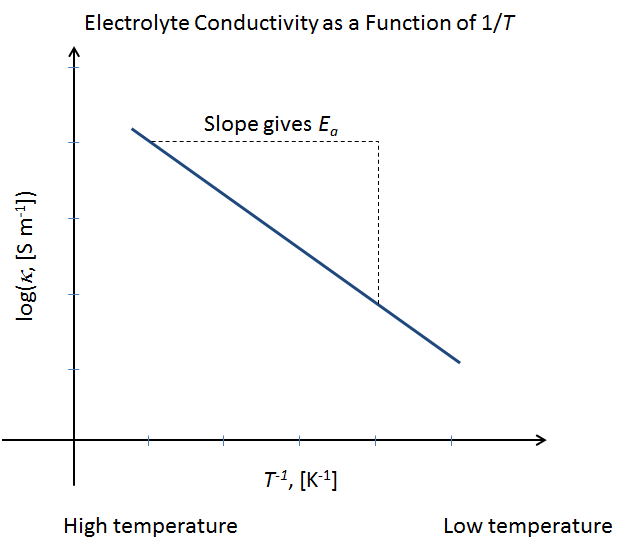 Therefore, the ohmic losses (resistive losses) in the battery electrolyte increase with decreasing temperatures, which results in a lower cell voltage at a given current at lower temperatures. In addition, the poor electrolyte conductivity results in a less uniform current density distribution in the porous electrodes, which in turn lowers the capacity of the battery. The capacity is defined as the amount of ampere-hours that can be taken out of the battery before the voltage drops rapidly. At lower temperatures, the capacity is there, but the low conductivity and subsequent nonuniform current density distribution makes it unavailable until after the battery heats up.

Also, the diffusivities of the chemical species in the electrolyte, which are vital for feeding the electrochemical reactions, are lowered to the same extent as the electrolyte conductivity. Decreased diffusivities increase concentration overpotential, which decreases the cell voltage. A lowered diffusivity also decreases the capacity of the battery, since a larger fraction of the particles in the battery’s electrodes is not accessible due to mass transport limitations.

Note that electrolytic conductivity and diffusivity are both related to mobility (see the Nernst-Einstein relation).

The physical explanation for the lowered mobility is that there is less thermal energy available in the electrolyte, which makes it more difficult for ions and molecules to overcome their mutual interactions or “friction”. The mobility in electrolytes as a function of temperature is described by an Arrhenius equation, where the activation energy (Ea in the figure above) represents the energy required for molecules to overcome their interaction with neighboring molecules and move around in the electrolyte.

The solid electrode material usually has a conductivity that is several orders of magnitude larger than that of the pore electrolyte. The change in conductivity with temperature in the solid material is usually negligible for battery performance. However, in some batteries, recharge may be problematic at cold temperatures, since this may lead to dendrite formation that destroys the battery.

The last large contribution to the poor performance of batteries at low temperatures is the sluggish kinetics of the anodic and cathodic reactions, which result in increased activation overpotential. The physical explanation for the slow electrode kinetics is that the activation energy becomes more difficult to overcome due to the lower amounts of thermal energy available in the system at low temperatures.

The figure below depicts the total effect on battery performance on account of increased activation losses, ohmic losses, and mass transport losses. We can see how the increased total overpotential at the two electrodes results in a lowered cell voltage at a given current and state-of-charge. 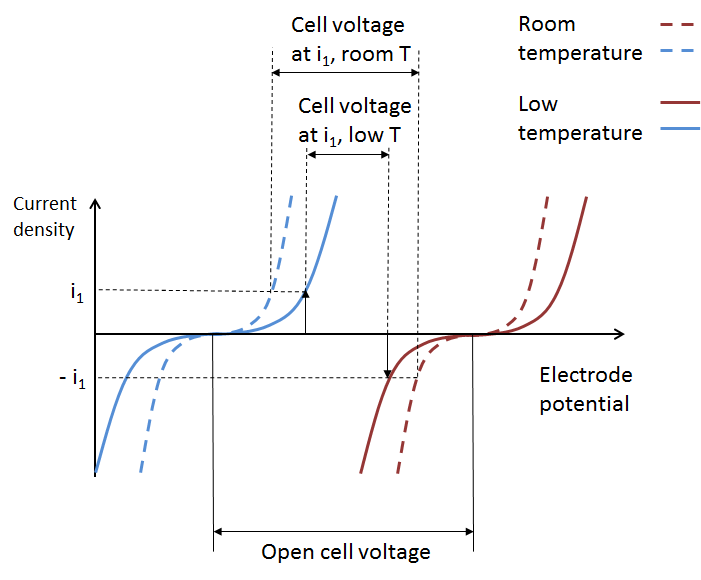 These curves originate from the Arrhenius equations for mobility and for the electrode kinetics at the electrodes, which, for reversible electrochemical reactions, result in the respective Butler-Volmer expressions.

Modern battery systems in electric vehicles are equipped with advanced thermal management systems. These systems are able to cool the battery when it operates at high loads and heat it when it’s plugged in during cold winter nights.

Heating the battery at cold temperatures also means that the efficiency and range of the electric engine declines, since a part of the electricity or regenerative power has to be converted to heat to keep the battery operating in the optimal range. Additionally, some of this power may also be used to heat up the cabin, which also reduces the efficiency and the range of the car. 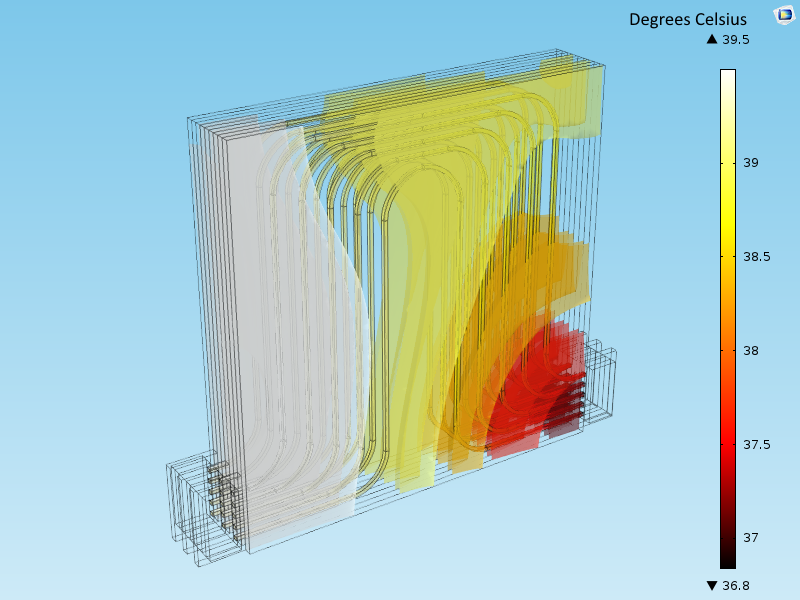 The figure above shows the results from a model of a Li-ion battery pack for automotive applications, equipped with cooling and heating channels. Such models are extensively used in the design of the battery’s thermal management system.

The inability of electric cars to quickly and spontaneously heat up their batteries after extremely cold winter nights is due to the electric motor’s high efficiency and the fact that it does not require the production of thermal energy to transform to mechanical work. Therefore, an electric vehicle should always be plugged in during nights before ski trips such as mine, so that the battery temperature is kept at a reasonable temperature range.

If these guidelines are followed, your electric vehicle will easily start — even in the Swedish mountains. In fact, most outside parking lots in the North (such as Alaska, Canada, Sweden, and Norway) have electricity outlets, and most conventional cars are also equipped with engine heaters. You do not want to take any chances at these temperatures, not even with internal combustion engines. 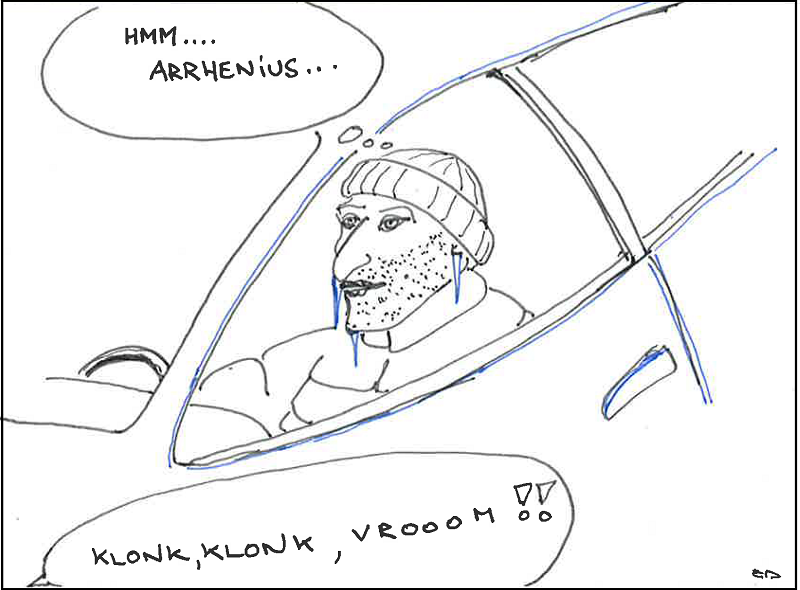 If you forget to plug in your car during your ski vacation, you may be tempted to return to the comfortable cottage and perhaps think about Svante Arrhenius, the Swedish scientist who developed the first quantitative description of the temperature dependence of chemical reaction rates and transport properties.

Modeling Copper Electrodeposition on a Circuit Board 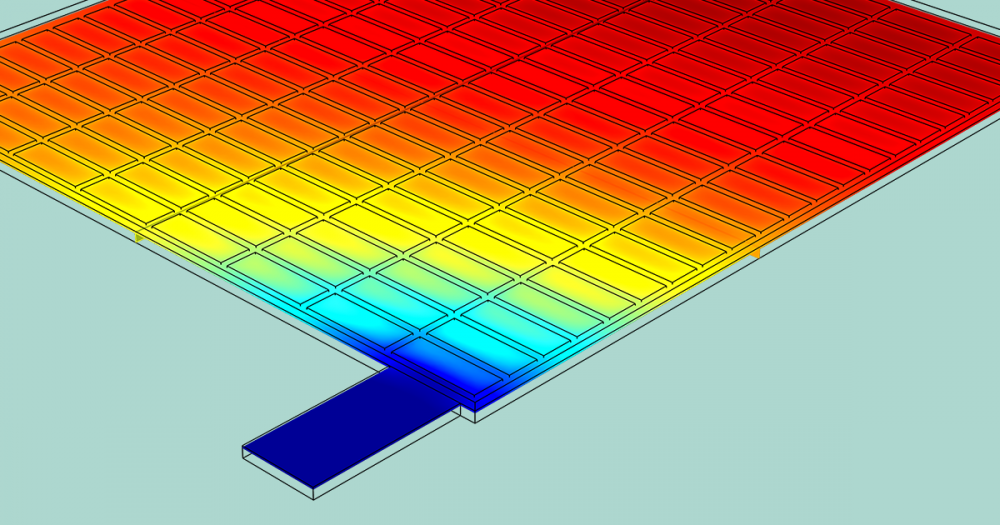 Very informative article. Appreciate the flow of the article. There is something you have mentioned. //However, in some batteries, recharge may be problematic at cold temperatures, since this may lead to dendrite formation that destroys the battery.// Could you please shed some light on this? What are those batteries?

Hi Sivarajakumar ,
Thank you for your kind words. Here is some reading about the subjects of plating and dendrite formation in batteries:
https://www.nrel.gov/docs/fy13osti/58145.pdf
https://doi.org/10.1016/j.jpowsour.2006.02.087
Best regards,
Ed

How can get model file of this program?