Around the Clock Solar Power

Italian utility ENEL and the Italian National Agency for New Technologies joined together to develop a new kind of Concentrating Solar Power (CSP), using Parabolic Trough CSP to generate electricity during sunny hours as well as under overcast conditions or at night. This new type of CSP plant depends on molten salt as a medium for storing heat in large, well-insulated tanks.

Molten salt has several advantages over the previously used pressurized oil because it can operate at a higher temperature which maximizes energy efficiency and potentially reducing the consumption of fossil fuels. The tanks are half the size because no oil-to-salt heat exchangers are required, and they provide seven hours of thermal storage. The salt can also be cooled and re-used, which is much more efficient than oil which degrades with use.

Keeping salt in the liquid state presented a challenge for ENEL. They used COMSOL Multiphysics and its built in library of heat transfer coefficients to analyze temperature and heat loss throughout the drainage circuit, optimizing both its geometry and insulation properties. 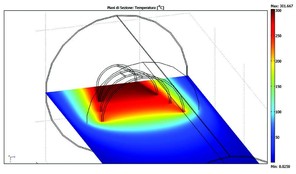 COMSOL simulation of the conic shape drain (the temperature field expressed in degrees C is shown).