As part of an industry that saves lives on a regular basis, pharmaceutical companies are in need of systems that can be used to deliver high-quality medicines. One method utilizes sound waves generated by an acoustic levitator with foam-coated transducers. Using the acoustic force from the sound waves, chemical particles are suspended between the transducers, where they can be mixed in a contaminant-free space.

Using COMSOL Multiphysics, Kamlesh Suthar and Chris Benmore of Argonne National Laboratory have simulated an acoustic levitator in order to find the best geometry for controlling how liquid droplets form between the transducers. They also investigated the changes in viscosity and surface tension and the effects that such parameters have on the droplet shapes. Studying the fluid-structure interaction (FSI), Suthar explored the sound pressure levels, material properties, and geometry options for the levitator. Simulating the acoustic levitator helped them to hone their design and achieve a new degree of control over the interactions between droplets, which will ultimately contribute to life-saving advancements for pharmaceuticals. 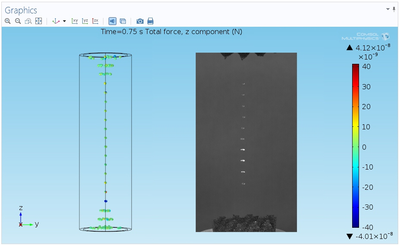