In many medical procedures and tests, it is necessary to isolate cells of interest for further analysis. Microfluidics has revolutionized the way in which these tests are conducted enabling, for example, the ability to detect cancer from a blood sample.

One of the most promising microfluidic techniques to separate and concentrate cells is called inertial focusing. The equilibrium positions for a particle in curved channel flows are a function of several parameters and forces; it is difficult to investigate all possible permutations through experiments.

Researchers at the Biomems Resource Center at Massachusetts General Hospital have simulated this and determined the best design. The CFD model they created took channel dimensions, particle size, Reynolds particle number, Reynolds channel number, and Dean number into account. Standard particle tracing was not applicable to predict inertial focusing and ODEs specifying the equilibrium of the particle in terms of its linear and angular velocities were included. The simulation results were in agreement with the experimental measurements, and they illustrate the dependence of the equilibrium positions on the channel curvature 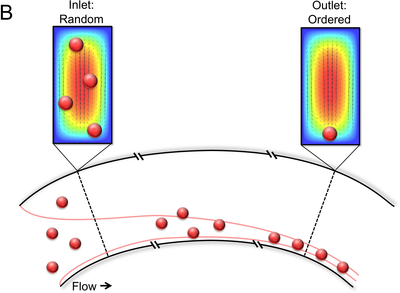