CEA-MINATEC is an international center for micro and nano-technologies which is funded by CEA, a French government-funded technological research organization. One of their current projects is developing silicon-based MEMS CO2 sensors that employ optical detection for monitoring adequate building ventilation.

For the sensor to function, a filament is heated to a specific temperature so that it emits most of its infrared radiation near a specific wavelength. The ambient CO2 absorbs much of this energy while the remaining infrared radiation is detected to allow calculation of CO2. These sensors run at very low current so they will last an extended period of time while costing considerably less than conventional CO2 sensors.

COMSOL Multiphysics is being used to find the optimum geometry for an energy-efficient filament which will avoid hot spots on the freestanding micro hotplate while consuming less energy. A 2D model was used with COMSOL’s ALE (Arbitrary Lagrangian-Eulerian) method to find geometric optimization. 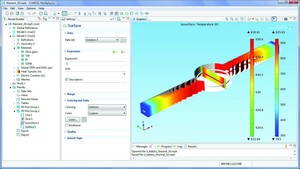