Would it surprise you to learn that one of the most prominent filmmakers during the advent of cinema at the turn of the 19th century was none other than Thomas Edison? Film has always straddled the line between science experiment and artistic expression, and although the way we capture images and present them to the world has changed drastically since then, it remains the same in many ways. Today, we explore some early works of cinema and the technology used to capture them.

Georges Méliès and A Trip to the Moon

In July of 2019, we celebrated the 50th anniversary of the Apollo 11 lunar landing. Back in 1902, filmmaker Georges Méliès took early moviegoers on a space mission of his own. A Trip to the Moon (or, Le Voyage dans la Lune) is one of the first films in the history of cinema to feature a narrative plot, special effects, and a depiction of aliens (friendly Moon inhabitants called “Selenites”). 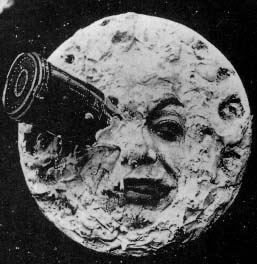 In A Trip to the Moon, a group of explorers crash their space capsule into the eye of the legendary “Man on the Moon”. The scene has become an iconic representation of early cinema. This work is in the public domain in its country of origin and other countries and areas where the copyright term is the author’s life plus 70 years or less. Image via Wikimedia Commons.

A moving picture, or just movie, is exactly as described: a series of sequential pictures conveyed at a certain speed to create the illusion of moving action. This is true of primitive precursors to cinema — like shadowgraphy, the zoetrope, and even illustrated flipbooks — and modern cinema, which is presented at a certain number of frames per second (FPS).

Although the history of early cinema is difficult to cover in full, here are a few highlights, as well as the science involved…

The Kinetoscope was a simple picture viewer developed in the mid-1800s. The device operated by feeding a strip of film with sequential photographs into a conveyor. The film was run over a light source along with a shutter that moved at super high speeds, which created the illusion that the image was moving. The moving pictures were viewed through a peephole at the top of the device. 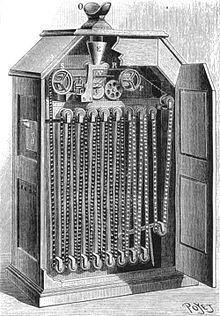 A Kinetoscope. This work is in the public domain in its country of origin and other countries and areas where the copyright term is the author’s life plus 70 years or less. Image via Wikimedia Commons.

Thomas Edison wrote about his experimentation with a moving picture device in 1888. Toward the end of the century, he and Louis le Prince designed improved versions of the Kinetoscope, but they were still not able to entertain the masses — or even more than one person at a time.

By adding a projector to the Kinetoscope design, multiple people could watch the picture together. Auguste and Louis Lumière developed and popularized a version of this called the Cinematograph, which was valued for its ability to capture, project, and develop film — all in one invention. 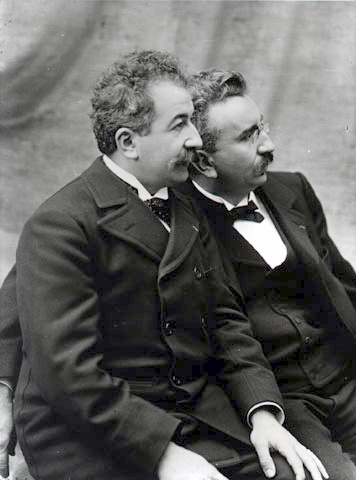 The Lumière brothers, Auguste and Louis, who are regarded as two of the first filmmakers in history. This work is in the public domain in the United States and other countries and areas where the copyright term is the author’s life plus 70 years or less. Image via Wikimedia Commons.

The Cinematograph included a fork-like component that held film frames behind the camera lens in place. If you’ve ever seen a strip of film, this is where those perforations on each side come from. The device also used water to concentrate light onto the film frame, which acted as a condenser and also absorbed heat for safer operation. 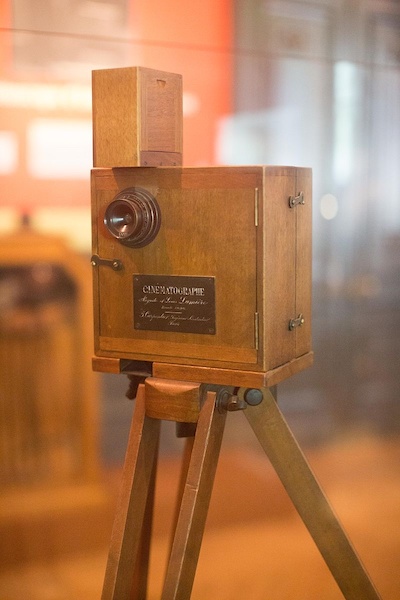 A Cinematograph at the Lumière Institute in France. Image by Victorgrigas — Own Work. Licensed under CC BY-SA 4.0, via Wikimedia Commons.

The Lumière brothers showed off the Cinematograph in 1895 at a public demonstration. In the audience was filmmaker Georges Méliès, who was so impressed by the device that he offered to buy one from the brothers many times. They always refused. 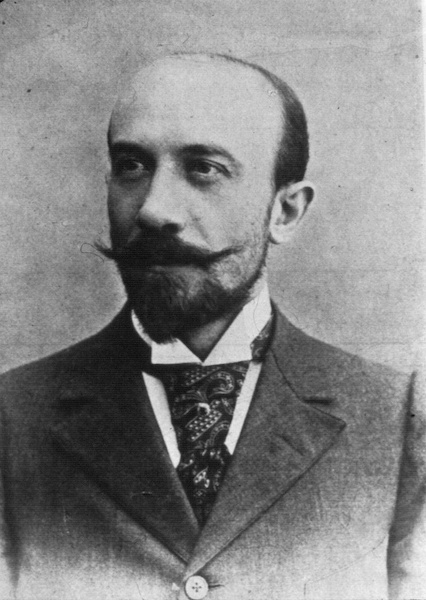 A portrait of Georges Méliès. This work is in the public domain in its country of origin and other countries and areas where the copyright term is the author’s life plus 70 years or less. Image via Wikimedia Commons.

Méliès eventually gave up on the Lumière brothers and bought a similar projector from British filmmaker Robert W. Paul. He used the operating principles of this projector to design his own camera, going on to create A Trip to the Moon and hundreds of other film projects.

During this film boom at the turn of the century, cinema advanced significantly. Color was added to moving pictures at specialized studios that added ink to the film by hand. Some inventors explored ways to effectively synchronize film with sound, such as Edison’s Kinetophone. 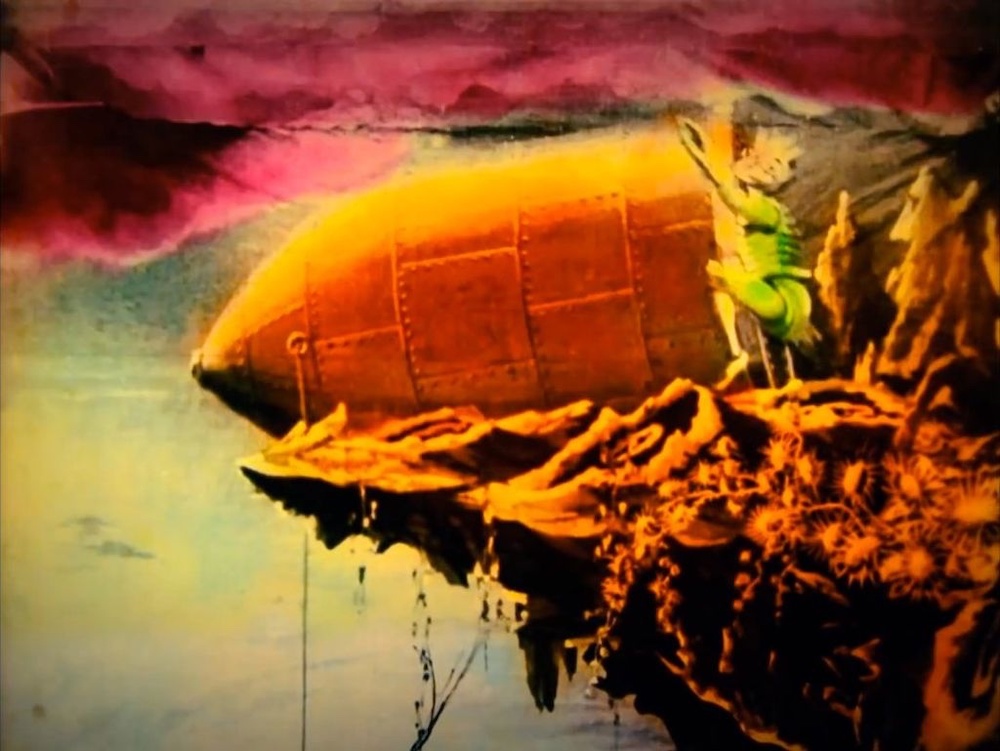 A still from A Trip to the Moon, colorized by hand. This media file is in the public domain in the United States. This applies to U.S. works where the copyright has expired, often because its first publication occurred prior to January 1, 1924, and if not then due to lack of notice or renewal. Image via Wikimedia Commons.

The content of films also improved in part due to technological advancements. Films started to include more than a single shot, which allowed for actual plot and narrative structure. This was a big contrast to early moving pictures, such as Fred Ott’s Sneeze by Edison and the famous Workers Leaving the Lumière Factory (aka La Sortie de l’usine Lumière à Lyon) by the Lumière brothers.

Filmmakers also began to add rudimentary special effects, such as the “stop trick” or substitution splice technique, which works as follows:

Although nothing like the CGI we see in Hollywood today, these effects were impressive for the time. Notable examples include Scrooge, or Marley’s Ghost, by Robert W. Paul and, of course, A Trip to the Moon.

An example of an early stop trick in Sherlock Holmes Baffled by Arthur Marvin (1900). This work is in the public domain in the United States because it was published (or registered with the U.S. Copyright Office) before January 1, 1924. Video file via Wikimedia Commons.

Modern cameras and theater projectors create more detailed, vivid, and realistic pictures than those of the early 1900s. However, A Trip to the Moon still offers audiences a glimpse into early movie magic. In 2000, it was ranked one of the top 100 movies of the 20th century by the Village Voice newspaper, and you can even find it on many popular video streaming sites today.