Are you Ready for the June 5th Venus Transit of the Sun?

Scientific curiosity characterizes, at least in part, the COMSOL community. So when a once-in-a-lifetime celestial event is set to occur, you can be sure to find a COMSOL user preparing to capture the moment.

John Francis of Maccor, Inc. (www.maccor.com) is one such user. As a mechanical designer, COMSOL user, and an amateur astronomer, John naturally decided to engineer the best setup to watch Venus make its way past the sun.

“I’m just making sure that there is some high resolution data from this part of the country,” says John.

John’s part of the country is Tulsa, Oklahoma, home to Maccor, Inc.. With his teammate, John Greener, also of Maccor, they have designed a website where you can watch their progress (and Venus’).

Getting into details, John Francis further notes that “mostly I’m going to try to maximize the pixel density of the observation. Our telescope has to have a focal reducer to get the entire sun into its field of view, so the real challenge will be to ‘zoom in’ on Venus as first contact and second contact happen. I’ll probably have to get a good alignment previous to the event and do some night time observing to get it ‘dead on’, then just don’t turn it off, an old trick from one of my favorite professors.” 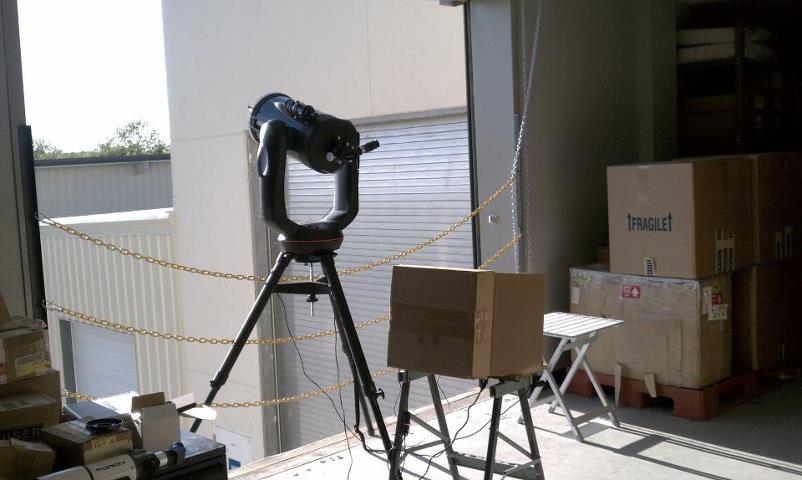 If you’re in the Tulsa area, you can sign up to watch the event live. (Space is limited, so follow the instructions on the website for more details.)

Everyone can watch online. And even better, the COMSOL community can participate in getting things set up:  “[…] I’m sure there are many multiples of things I’m overlooking, I’m just one man,” says John. “Not only that, from the people I’ve interacted with there at COMSOL, I know you have some very bright people there. I would be enthusiastic about hearing their/your thoughts on this.”

“Well, Acoustics is mainly it. I have used other modules to solve joule heating problems, etc. I’m sure as my journey into learning more about COMSOL continues, I’ll no doubt try to simulate quantum events (is that possible?) like space-time telling light how to curve, etc.”

He’s quite ambitious and knows he needs a tool that supports his open mind.

He goes on, “For now, I use COMSOL to simulate aeroacoustic mufflers. My first design works very well. I just finished making it smaller to make it more marketable. I made an absorptive-reactive muffler that outperforms our ‘off-the-shelf’ unit that we buy by 50%. I’m confident that the next version will be even better.”

“I just start at the whiteboard with some equations of what should work, then I dream something up in 3D CAD that follows suit, finally it’s off to COMSOL with the design to let me know if I’m right. I usually am, but the visual aids really help me to optimize the design before ever making a prototype. The simulations and real life are the same. It’s amazing to have such a powerful resource at my desktop.”

I believe I speak for the entire COMSOL community in wishing John and John the best!

About the Team:
John Francis – “John is an amateur astronomer and MACCOR employee. He has some basic astronomy research skills acquired in college astronomy classes. He serves as the chief observer for the project, as well as head fundraiser.”

John Greener – “John is also an amateur astronomer and MACCOR employee. He specializes in computers and networking. He studied microprocessor design in college. He serves as Lead Technical advisor for the project. He also serves as an observer.”

MACCOR, Inc. provided the team with the location