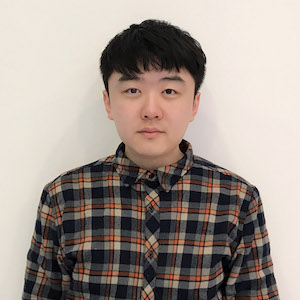 Simulation specialists from all around China recently came together for the COMSOL Conference 2016 Shanghai to discuss their research and modeling work. While there was a variety of interesting presentations on how the COMSOL® software is used for innovation, three of the conference posters were recognized as especially impressive. Read on to learn more about the presentations that received Best Poster awards at the COMSOL Conference 2016 Shanghai.

There were many posters presented at this year’s COMSOL Conference in Shanghai. Application areas included the microwave heating of spherical materials, radio frequency thawing of frozen beef, and the numerical analysis of loudspeakers. As a whole, more than 75 simulation presentations were featured at the COMSOL Conference 2016 Shanghai. 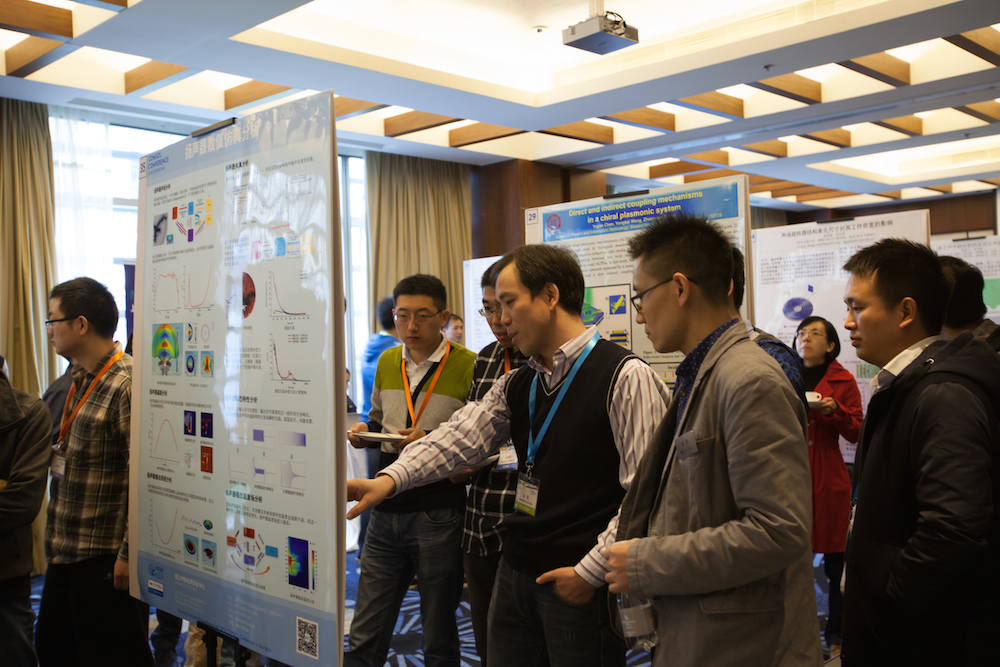 Attendees take a look at some of the conference posters.

At the COMSOL Conference 2016 Shanghai, over 280 conference attendees voted for their favorite presentations out of all of the posters. Three posters were recognized with Best Poster awards during the conference awards ceremony. 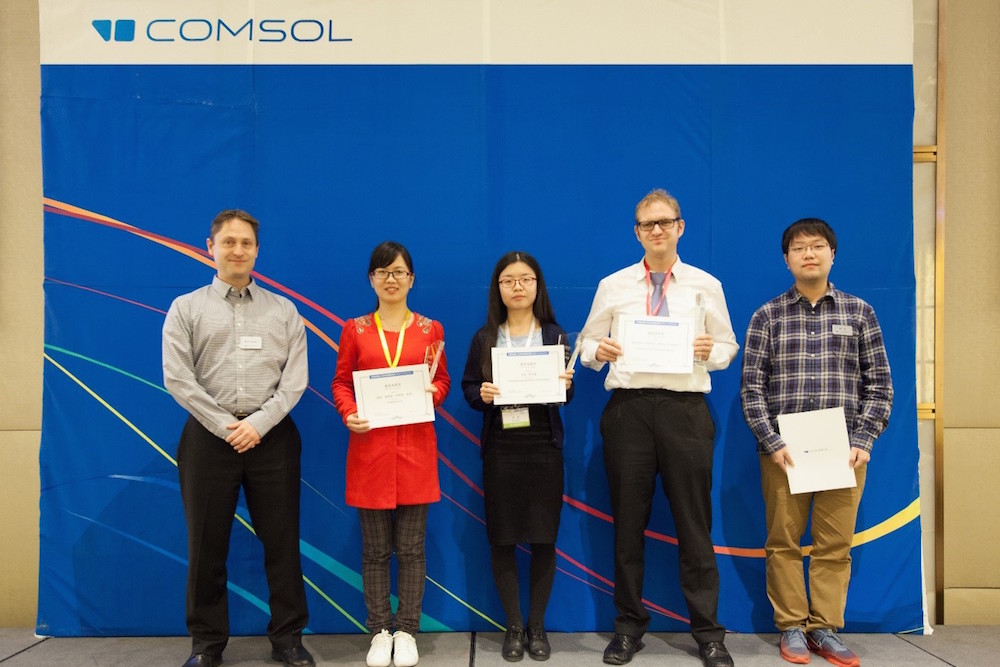 The first Best Poster award went to Johannes Hörmann from Tsinghua University for his presentation on multiscale modeling. The poster “Multiscale Modeling of Bipolar Electrochemistry” gives an overview of the three steps of developing a continuous multiscale model. 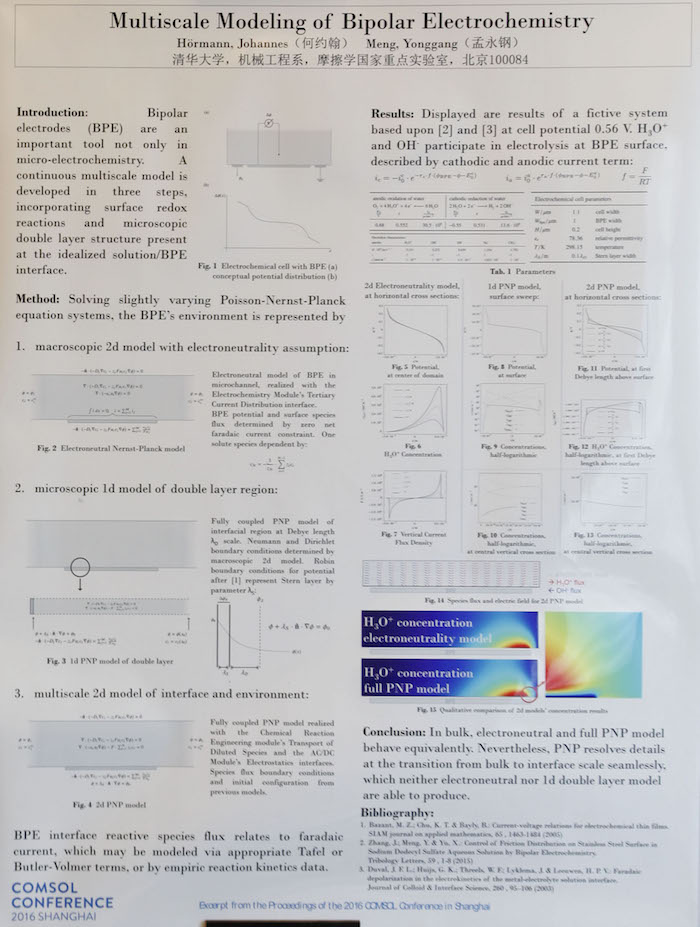 The aim of the research was to develop a multiscale model for bipolar electrodes (BPE), which are an important tool in the study of microelectrochemistry. By solving slightly varying Poisson-Nernst-Planck (PNP) equation systems, Hörmann was able to represent the BPE environment in three situations: a macroscopic 2D model with an electroneutrality assumption, a microscopic 1D model of the double-layer region, and a multiscale 2D model of an interface and environment.

Through his research, Hörmann was able to conclude that the electroneutral and full PNP models behave equivalently. Nevertheless, the PNP model resolves details at the transition from the bulk to interface scale seamlessly, which neither the electroneutral nor 1D double-layer model are able to produce.

Qiong Wang received a Best Poster award on behalf of her research group from Xi’an Jiaotong University for the poster titled “The Influence of Compression Degree of Electrode on Flow and Electrochemical Properties of Vanadium Redox Battery”. For their research, Wang and her team analyzed the influence of different compression degrees of electrodes on flow and the electrochemical properties of a vanadium redox flow battery (VRFB).

“Numerical Simulation and Analysis of a Loudspeaker”

The final Best Poster award was presented to Xiao Lu and her colleagues from Zhejiang Electro-Acoustic R&D Center for the poster “Numerical Simulation and Analysis of a Loudspeaker”. This poster presents relatable research, as loudspeakers are commonly found in our day-to-day lives. 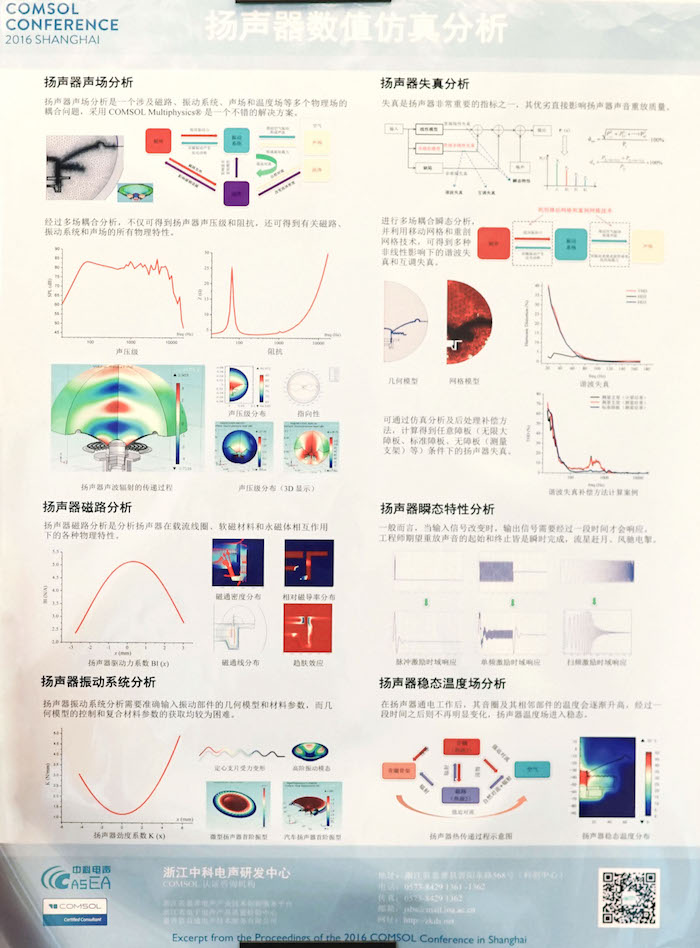 The analysis of the sound field of a loudspeaker is a true multiphysics problem that involves magnetics, vibration, acoustics, and heat transfer. With the COMSOL Multiphysics® software, this research group easily accounted for coupled multiphysics phenomena. With simulation, they were able to analyze all aspects of loudspeaker performance, which is helpful for follow-up research and development on loudspeakers.

Thank You and Congratulations to the Conference Award Winners

We would like to extend our gratitude to everyone who presented their simulation research at the COMSOL Conference 2016 Shanghai and especially congratulate the three Best Poster award winners. It was interesting and enjoyable to learn about all of your work. 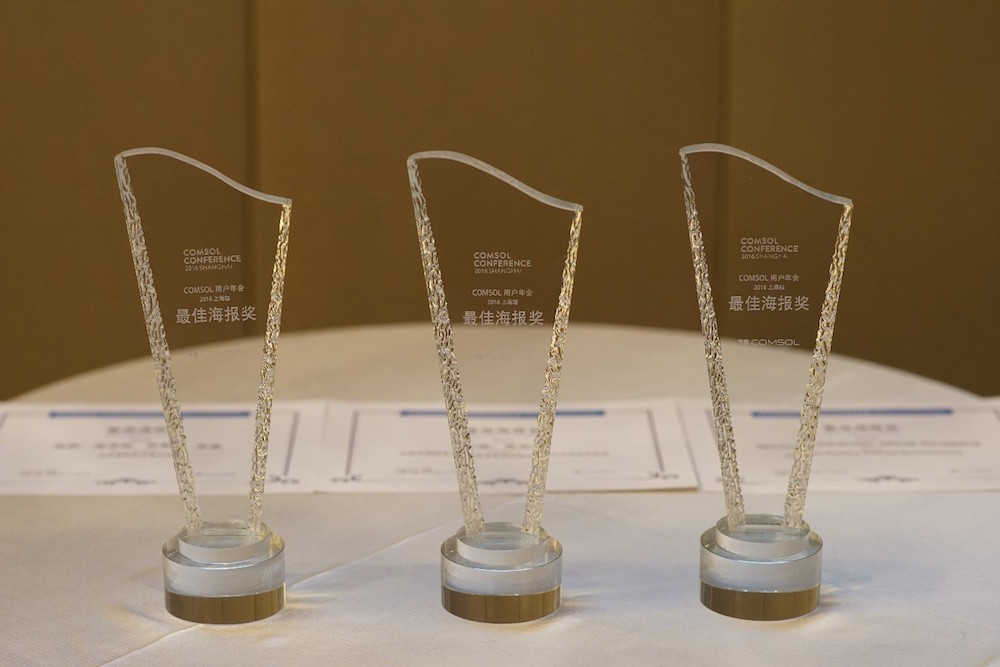 Stay tuned for all of the posters from the COMSOL Conference 2016 Shanghai!