You can easily describe composition- and temperature-dependent fluid properties using the thermodynamic properties database, available as of version 5.3a of the COMSOL Multiphysics® software. For reacting systems, the database computes enthalpy of formation and enthalpy of reaction. For fluid flow and heat and mass transfer, the database can compute viscosity, density, heat capacity, thermal conductivity, and diffusivity of liquids and gases. For systems with several phases, the thermodynamic properties database computes the composition of the phases at equilibrium.

Gas and liquid solutions that consist of mixtures of chemical compounds (species) have properties that depend on both composition and temperature. We need accurate descriptions of these properties to solve fluid flow problems with heat and mass transfer as well as reacting flow problems. These descriptions are based on thermodynamic models for properties such as heat of reaction, heat of formation, heat capacity, viscosity, density, thermal conductivity, and diffusivity. 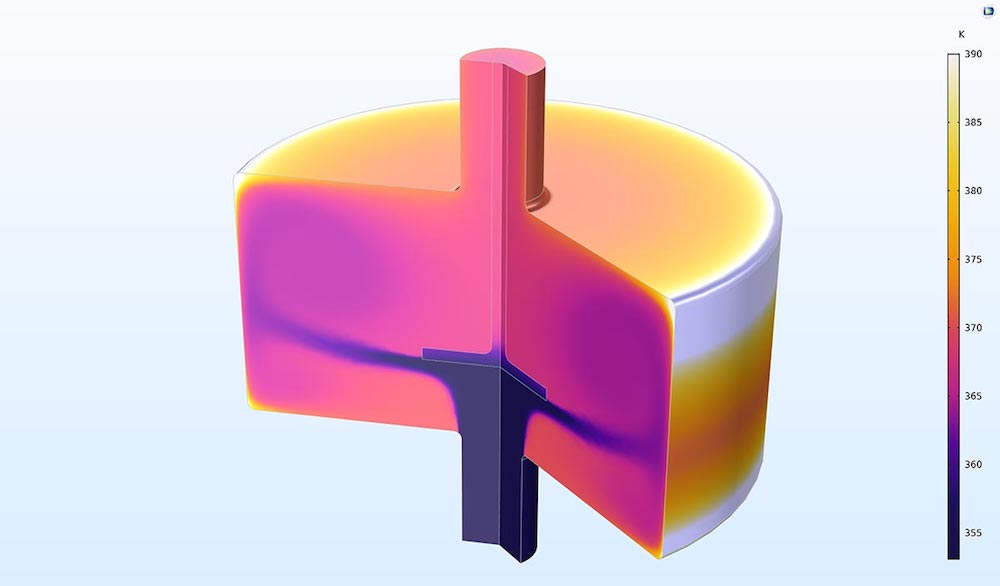 This model shows how the composition of a coolant mixture affects the boiling point, density, viscosity, thermal conductivity, and heat capacity of an internal combustion engine.

The Chemical Reaction Engineering Module as of COMSOL® software version 5.3a contains a new thermodynamic properties database with parameters and functions for a vast range of thermodynamic models and properties.

For gas mixtures, the following thermodynamic models are available:

We are going to explore the functionality in the new thermodynamic properties database using three different examples. The first example deals with the calculation of fluid properties for nonisothermal flow. The second example is a model of a tubular reactor, where in addition to transport properties, chemical reactions are also taken into account. The last example studies a distillation process, where the thermodynamic properties database is used to calculate the liquid-vapor equilibrium (flash calculations), including condensation and evaporation.

The first example is a model of conjugate heat transfer in a four-cylinder combustion engine. In cold climates, the coolant liquid that flows inside the channels in the engine block is a mixture of glycol and water. 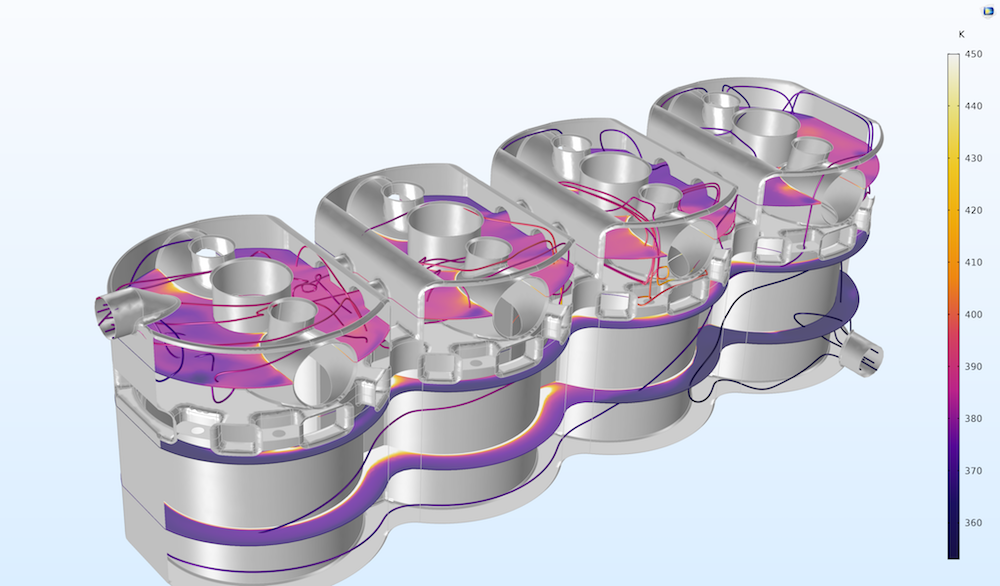 Temperature in the cooling channels inside the engine block in a four-cylinder engine. 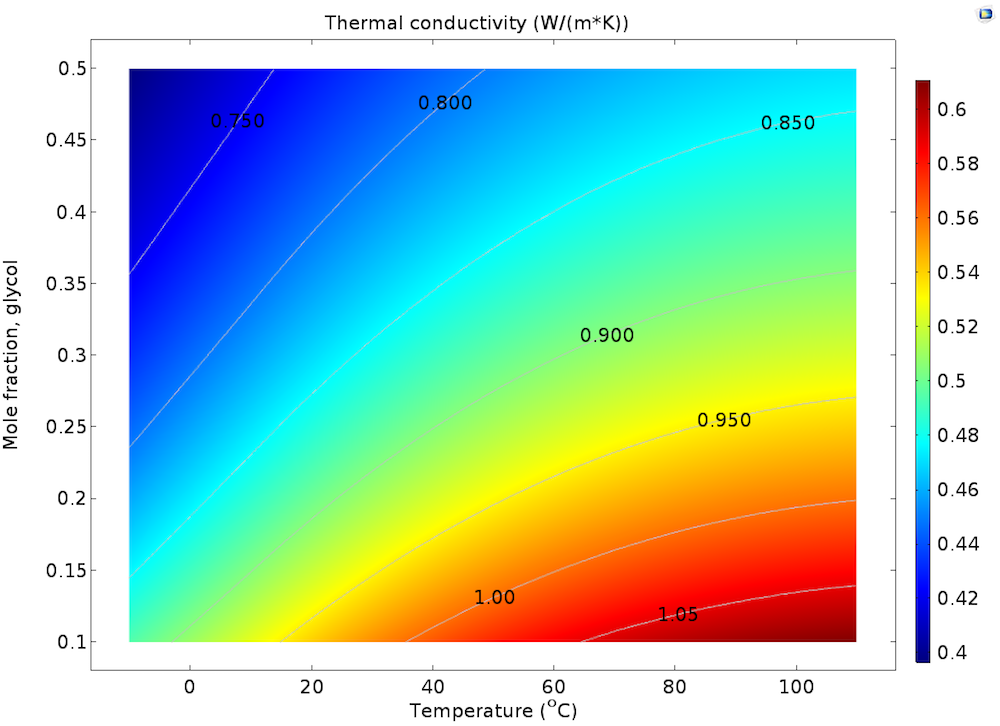 For chemical engineers, the thermodynamic properties database also allows for the modeling of reacting systems, where the heat of reaction and the enthalpy for phase transfer reactions can be calculated automatically from the database. The figure below shows the concentration of the reactants and products as well as the temperature in a tubular reactor for the thermal hydrodealkylation (HDA) of toluene, in which benzene is the desired product. Two reactions occur in the reactor. The first reaction is the desired irreversible dealkylation of toluene:

This is followed by the by-reaction, which is the reversible production of biphenyl:

The model describes how the feed of hydrogen and the control of the temperature in the reactor can also be used to control the production of the desired product, benzene. For example, the figure below shows that after the axial position around x = 0.4, the concentration of the desired product increases to a very small extent. Most of the toluene in the remaining length of the reactor is converted to the unwanted biphenyl. 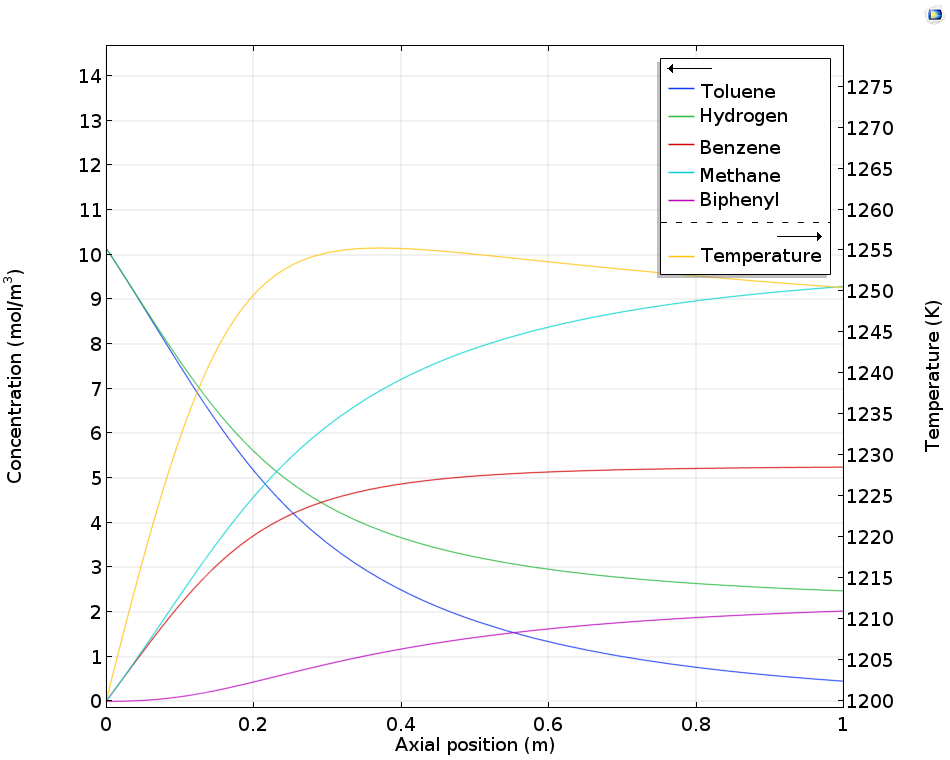 Concentration and temperature in a tubular reactor for benzene production as a function of the axial position.

A better yield for the desired benzene product is obtained if hydrogen is fed continuously through the reactor walls using a membrane. This is shown in the figure below, where toluene is almost completely converted with a lower production of biphenyl at the same time. 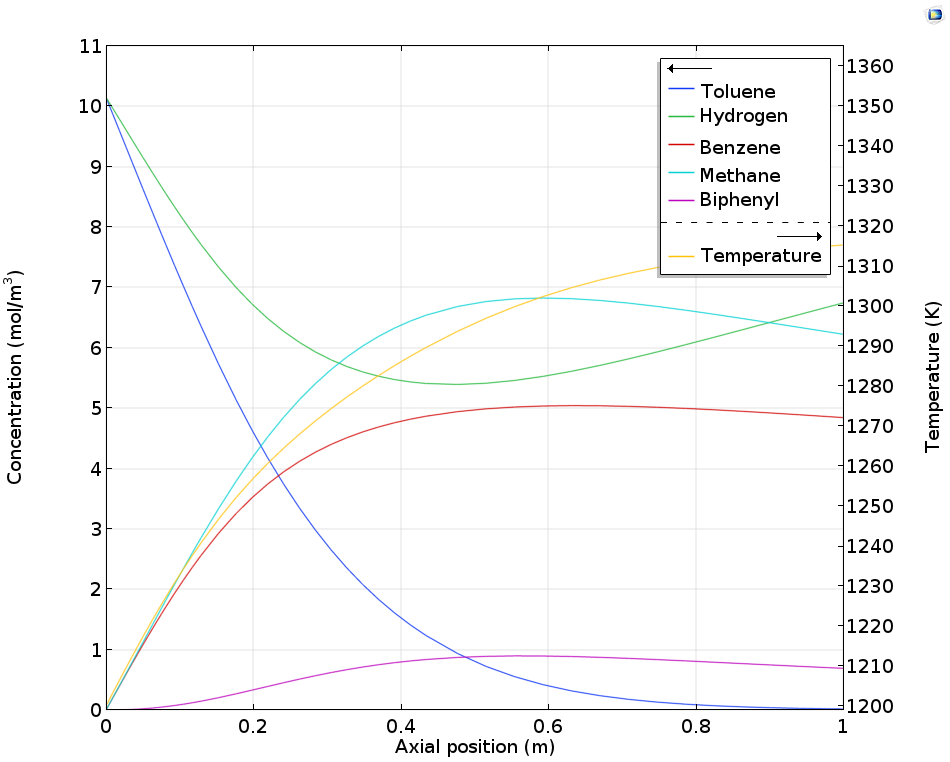 Concentration and temperature in a tubular reactor for benzene production as a function of the axial position. The reactor is equipped with a hydrogen permeable membrane that, by keeping a decent hydrogen concentration, reduces the production of biphenyl. 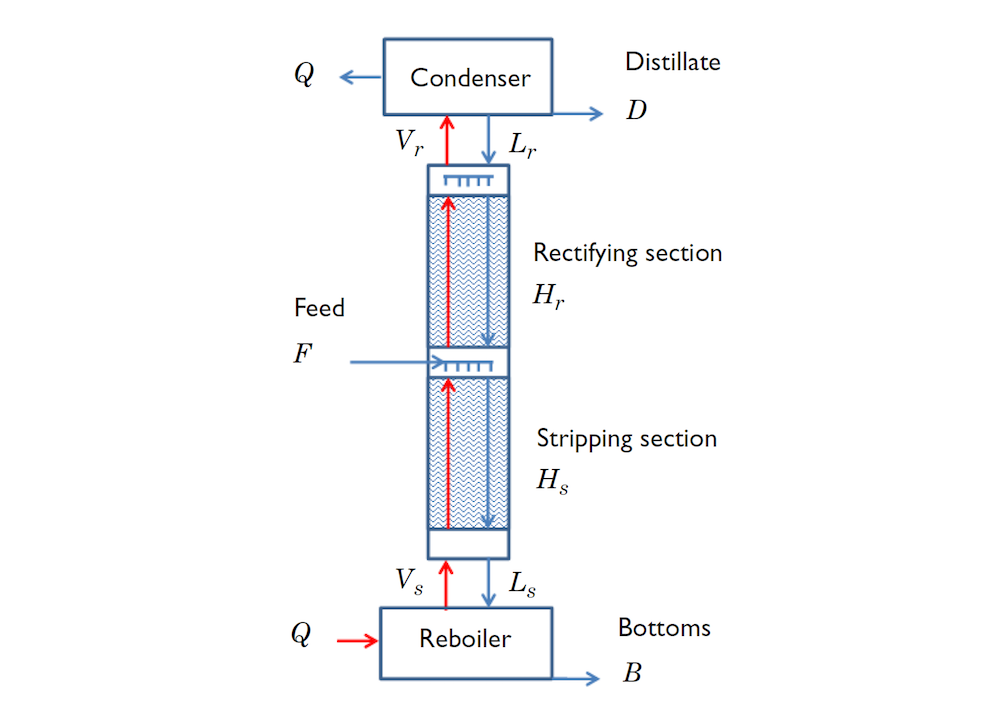 The distillation column where the feed is placed near the middle, while the reboiler is at the bottom and the condenser at the top.

The thermodynamic model used for this example is the NRTL model. The resulting compositions of the vapor and liquid phases along the height of the column are shown below. We can see the little crinkle in the liquid phase composition curve at the position of the feed, at a distance of 1.2 m from the bottom. The curves show that we cannot obtain a separation that is above an ethanol mole fraction of 0.85; i.e., at this stage, the composition of the vapor and liquid phases are the same. 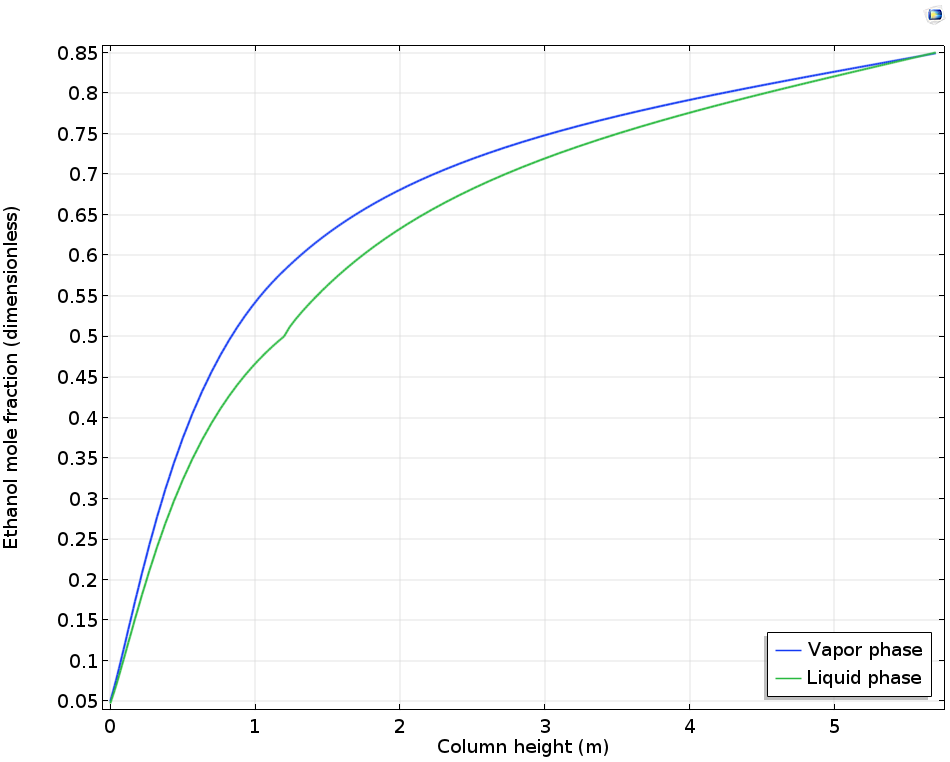 Vapor and liquid phase composition as a function of the distillation column height.

Linking the Thermodynamic Properties Database with the Reaction Engineering Interface

The settings for a thermodynamic property package, with the list of selected chemical species (compounds) and the thermodynamic model for the mixture.

Once the linking is done, the reactor model can be run for the species and energy balances with a full description of the thermodynamics and transport properties of the system originating from the database.

The new thermodynamic properties database can be used over a wide range of applications, including:

Try out the examples reviewed in this blog post, which are available in the Application Gallery: