The COMSOL Conference 2013 Rotterdam was well-attended and highly informative. The keynotes were the high point of the event, and they were excellent examples of multiphysics applications. The sophistication of the modeling work presented by Alwin Verschueren of Philips Research Laboratories in Eindhoven, the Netherlands, and Holger Ernst and Christian Schröder of mieletec FH Bielefeld, Germany, was truly spectacular and kept all the attendees enthralled.

It seems unusual that you can use the properties of acoustics to first create and then pump microdroplets to be absorbed in human lungs through pulmonary devices. Yet, this is exactly the type of technology Philips Research Laboratories is developing. Using a piezoelectric device, acoustic resonance is created in the fluid in a cavity that in turn causes a mesh to vibrate. The holes in this mesh act as small nozzles, and the pressure difference caused by the vibration of this mesh allows for billions of small droplets of fluid to be formed and released at regular intervals by the mesh. 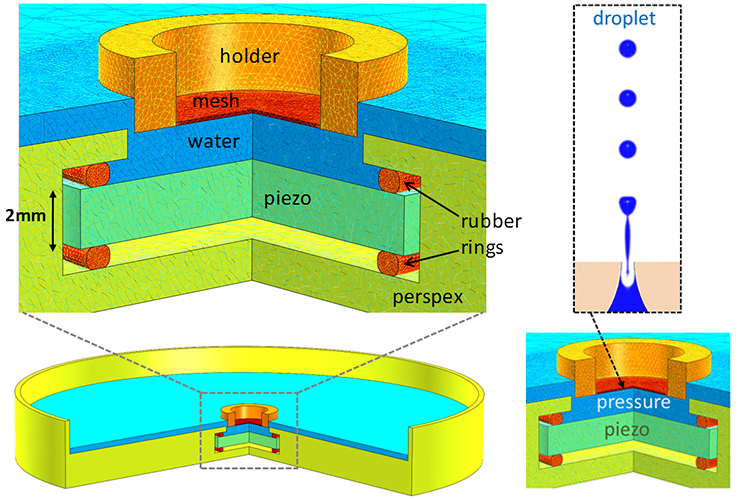 Set-up of the nebulizer models where the piezoelectric material induces acoustic pressure waves in the cavity, which vibrate the mesh and create microdroplet mists. Image courtesy: Alwin Verschueren, Philips Research Laboratories in Eindhoven, the Netherlands.

Philips uses this process to create mists of medicines to be absorbed through the lungs of humans in pulmonary devices known as nebulizers. While pulmonary drug delivery is more or less synonymous with treating lung diseases, it is also fast becoming popular in administering drugs for other diseases as well. This is because uptake in the bloodstream is rapid in its deployment of drugs for combating the disease in question, and it is pretty convenient to use as well. Even common headache treatments can be administered this way where pulmonary devices have an advantage over tablets, which vary in their uptake abilities through the stomach and are quite slow to act. 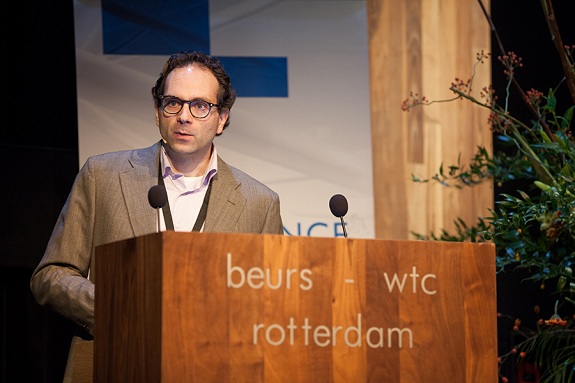 The criterion Alwin and his team had to reach was to design a nebulizer that could create and release a billion of these droplets every second, in the size range of 4 μm. In order to do this, they modeled the piezoacoustic properties of their piezoelectric actuator, the acoustics-structural interaction between the cavity fluid and mesh, and the capillary and free microfluidics flow of droplets moving through air. Truly amazing stuff. I encourage you to look out for his presentation when we release all of the keynotes and technical papers from the COMSOL Conference 2013 just a few weeks from now.

Pots and Pans that Sing and Dance

The other keynote presentation was also highly interesting and sophisticated in the modeling that was performed. While initially using COMSOL to model the inductive heating characteristics of Miele® induction stove tops, mieletec FH Bielefeld then wanted to investigate why certain physics interactions can sometimes cause pots and pans to start singing and dancing on these stove tops. Simulations show that the movement is caused by magnetically-induced vibrations created by magnetostriction and Lorentz forces.

Mieletec FH Bielefeld is a collaborative research laboratory between the University of Applied Sciences, Bielefeld, and Miele & Cie. KG. I had read about their modeling of the inductive heating properties of their stove tops previously in a COMSOL News User Story, but it was good to see that their work on the singing and dancing pans had also come to fruition. This part of their research is explained well in their presentation, and, once again, I encourage you to look out for it when the keynotes and technical papers from the COMSOL Conference 2013 are released. Next year, the European stop of the COMSOL Conference will be hosted in the United Kingdom. Hope to see you there!

Miele is a registered trademark of Miele & Cie. KG.